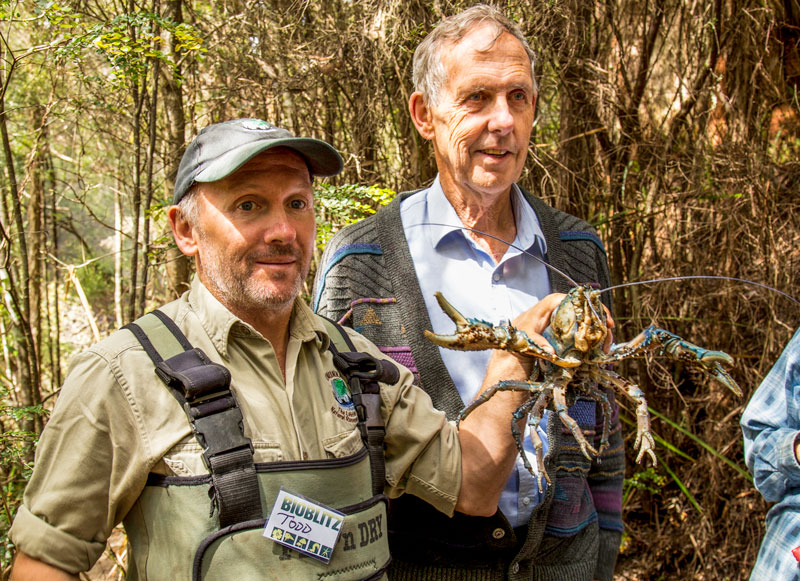 The Bob Brown Foundation is calling for urgent protection of ancient forests on the banks of the Tarkine’s Frankland River. Two areas of forests are on Forestry Tasmania’s logging schedule for February 2017, with two endangered wedge-tailed eagle nests and prime habitat for the vulnerable Astacopsis gouldi (Giant Freshwater Crayfish).

‘It would be derelict economics to log the Tarkine’s Frankland catchment with its giant freshwater crayfish. Todd Walsh today showed how these giant crays astonish visitors. The Frankland River should be a global attraction, not a clearfelled ruin’, Bob Brown said.

‘This is one of the last remaining tracts of large river systems that are home to the unique blue giant freshwater crayfish. It is imperative that we acknowledge the importance of leaving this river as it has been for millennia and ensure that remaining significant populations of these iconic giants have a secure future’, Todd Walsh said.

Bob Brown Foundation is campaigning for a Tarkine National Park and World Heritage listing, including vast tracts of intact forests such as these on the banks of critical habitat for Astacopsis gouldi.

‘Forestry Tasmania and the Hodgman Government can take these forests off the logging schedule and protect them for the threatened species that call these forests home. Our Foundation is ramping up our campaign for these forests,’ Bob Brown Foundation’s campaign manager Jenny Weber said.

‘Successive governments have paid lip service to this giant of the waterways for decades. It is listed as a priority species under the Regional Forest Agreement, yet no land has been increased protection to ensure this world recognised icon thrives. This government needs to take tangible steps to protect the giant freshwater crayfish instead of destroying its homes with sediment after logging,’ Todd Walsh said.

A high resolution version of the photograph is available here.