Braddon: Poll shows most voters want a Tarkine National Park and our survey of candidates proves on the Greens candidate is representative of this. 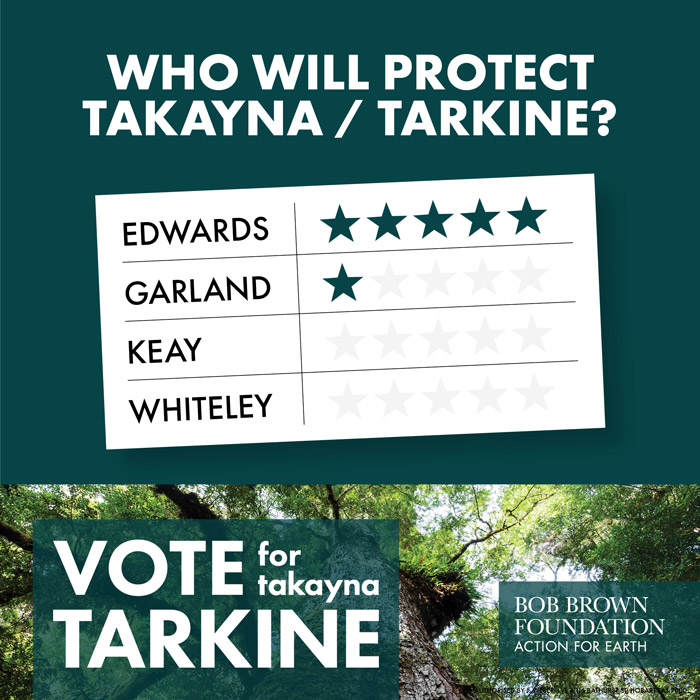 All candidates were sent a questionnaire but only Jarrod Edwards and Craig Garland responded.

Each candidate in the Braddon by-election has been sent the following questions and prefacing statements:

1. The takayna / Tarkine has been twice assessed by the Australian Heritage Council as having verified heritage values, and yet due to inaction by successive governments, it still faces multiple threats.

If you are elected to Federal Parliament will you vote to protect takayna / Tarkine?


2. Despite a large part of takayna / Tarkine being listed in conservation areas and regional reserves, these lower order reserves allow for rainforest logging and/or mining. A Tarkine National Park would securely protect unreserved parts of the Tarkine and raise the level of lower order reserves to National Park protection. The proposal excises all current mine leases.

Do you support a Tarkine National Park?


3. The takayna / Tarkine is rich in Aboriginal Heritage and is a landscape that plays a vital role in maintaining connection to culture and country for Aboriginal people. Bob Brown Foundation supports the return of these lands to Aboriginal ownership and management. It would be an important step in addressing injustices caused in the theft of this land.

Do you support the return of takayna/Tarkine to Aboriginal ownership?


4. In 2012, 15 of the 95 off road vehicle tracks along the Tarkine coast were closed to vehicles to protect Aboriginal Heritage sites and shorebird nesting areas. The Federal Minister for the Environment will consider the Tasmanian Government’s application to reopen these tracks and expose these sites to irreversible damage.

Will you advocate to keep the coastal region between Sandy Cape and Pieman Heads closed to off-road vehicles? yes/no


5. The recent resigning of the Regional Forest Agreement enshrines logging of rainforests, including those previously protected by John Howard and Paul Lennon, and those promised protection under the Tasmanian Forest Agreement.

Do you support logging of rainforests in takayna / Tarkine?


6. The Tasmanian government is proposing a $20 million walking track in Tasmania. Partners Bob Brown Foundation, Tasmanian Aboriginal Land Council, Tasmanian Aboriginal Centre and tourism operators have funded a feasibility study and a demand study for a proposed 104 km Trans Tarkine walking track that starts at Tarkine Wilderness Lodge, traverses the rainforests and coast and finishes at Corinna Wilderness Experience. This project would attract visitors to the Braddon region, complementing the Overland Track to make our region a mecca for bushwalkers.

Do you support the Trans Tarkine Track?

Media Release: Liberal, Labor ‘No Show’ on Tarkine Issue in Braddon. Greens Top, Garland Gets 1 Out of Five.

Doing what Eric Abetz called a ‘no show‘ indicating extremist policies, the Liberal (Brett Whiteley) and Labor (Justine Keay) candidates for Braddon have failed to take part in a survey on the future of the Tarkine, which is wholly located in Braddon. The Tarkine’s future depends on federal government decisions.

‘One thing Senator Abetz will like is the response from independent Craig Garland who did not back a national park but does want selective rainforest logging. However, Mr Garland has drawn the line at industrial clearfall logging which Liberal and Labor back in Australia’s largest temperate rainforest,’ Bob Brown said today.

The Bob Brown Foundation sent a questionnaire to all Braddon candidates and the Greens’ Jarrod Edwards is ‘clearly the winner for voters who want the Trans Tarkine Track and the Tarkine protected or returned to Tasmanian Aboriginal ownership.’ The Foundation will place a prominent advertisement in Wednesday’s Advocate so all Braddon voters know these results by Saturday.

‘The Tarkine is a real sleeper issue and potential vote-changer,’ Brown said. Our ReachTell poll of 700 Braddon voters in July shows the majority want action for the Tarkine. But both Labor and Liberal want activities to lock tourists out: surprising in this age of job-growth due to booming visitor numbers to Tasmania’s natural attractions. The big parties are making an anti-jobs stance by refusing to give it national park or World Heritage protection. Their ‘no-show’ on questions about the Tarkine underscores how sensitive and potentially vote-losing their last-century stance is.’

‘Our ReachTell poll in Braddon shows that most voters back the Foundation’s proposed Trans Tarkine Track, most want national park protections and a big majority also want the Aboriginal heritage coastal area between Sandy Cape and the Pieman River kept free of off-road vehicles. We strongly advise voters to put the Greens’ Jarrod Edwards first, Mr Garland second and then Labor and Liberal in the order they choose. Voting Greens first will be double-value voting as preferences to other parties flow on as full-value votes,’ Brown said.