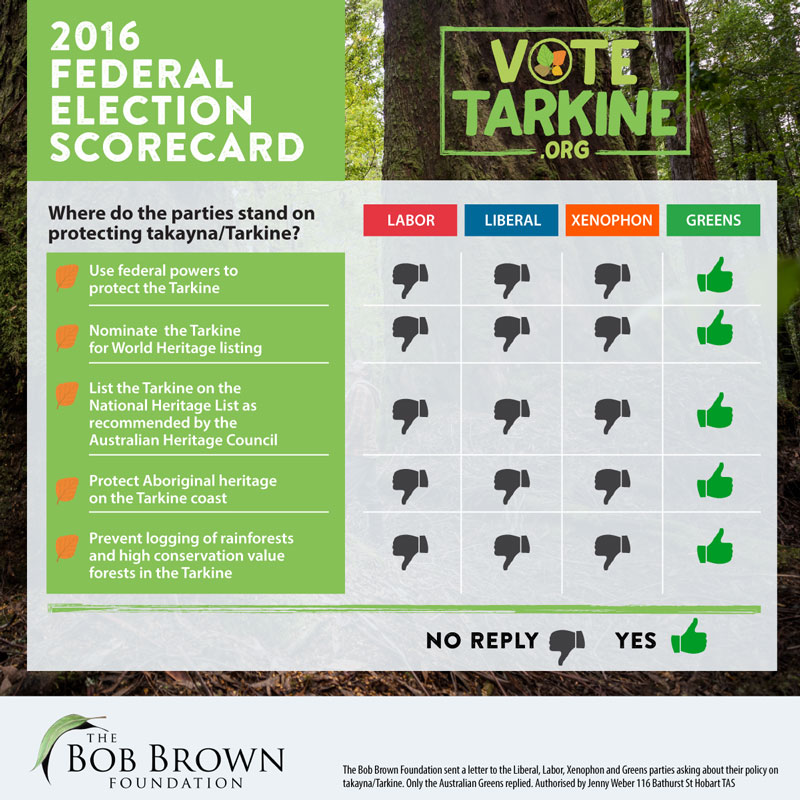 The Bob Brown Foundation has released a Federal Election score card on Tasmania’s takayna/Tarkine today for the major parties.  The Foundation sent a questionnaire to all parties in May asking if they would utilise federal powers to protect Tasmania’s Tarkine.

‘Disappointingly three of the leading parties turned down the opportunity to respond to our request to commit to protecting the Tarkine, sadly Labor, Liberal and Xenophon parties get a thumbs down,’ Bob Brown Foundation’s campaign manager Jenny Weber said.

‘The Australian Greens were the only party who replied to our questionnaire and committed to nomination of the Tarkine as World Heritage, recognise the Australian Heritage Commission’s 2010 recommendation and list the Tarkine as national heritage, securely protect Aboriginal heritage, and prevent logging in high conservation value forests and rainforests. In our score card released today they are the only party that gets the thumbs up on committing to protect the Tarkine,’ Jenny Weber said.

‘Tasmanian’s Tarkine has natural and Aboriginal cultural values that are of outstanding universal value and meet criterion for World Heritage listing. The Tarkine is a global treasure and our nation could be working towards protection for the vast intact landscape with Australia’s largest temperate rainforest and long stretch of remote coastline with globally significant Aboriginal heritage values and the cleanest air in the world,’ Jenny Weber said.

‘The Tarkine remains largely unprotected despite a 2010 recommendation from the Australian Heritage Commission to list 439,000 hectares as National Heritage. Governments have still entrenched environmental and economic damaging activities in the Tarkine, such as the abandoned Shree mine, ongoing logging in rainforests, opening rainforest reserves to logging and sanctioning the off-road vehicle damage to significant Aboriginal heritage in the Western Tasmanian Cultural Landscape,’ Jenny Weber said.

‘The Foundation will continue to work for secure protection of the Tarkine when the new government is elected this weekend. Australia needs to recognise the world heritage values of this last great wild place on Earth and nominate the Tarkine for protection,’ Jenny Weber said.

The Bob Brown Foundation website for this Federal Election is votetarkine.org, our television advertisement can also be viewed at this website.