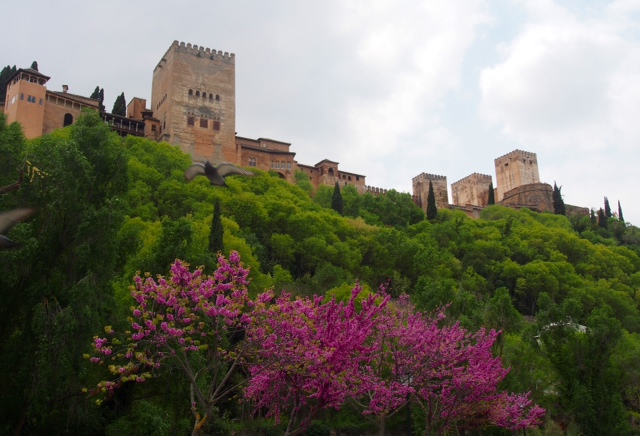 The Alhambra (Red Fortress) dates from the tenth century but was primarily built by the Moorish (Muslim) sultans between 1237 and 1391.

Its hilltop grandeur echoes Tibet's Potala (Dalai Lama's) Palace which was constructed in similar times. The Alhambra was proclaimed World Heritage in 1984, 2 years after the Tasmanian Wilderness's listing. One of the world's great buildings, not least for its beautiful tiled palaces, tours are booked out months ahead unless you care to queue at 6am for the 400 on-spec tickets available each day.

The huge Sixteenth Century palace of King Carlos V (not visible here) is an add-on: the fortress was surrendered to the Catholic monarchs in 1492, the year Columbus crossed the Atlantic. The infamously cruel and perverted Spanish Inquisition was to follow on both sides of the ocean.

But springtime in the valley makes this scene from the city of Granada, below the Alhambra, seem as if humanity and nature are an inevitably sublime duo. And the openness and friendliness - not to speak of the paella and beer - of modern Spain, where equal marriage is law, is indeed sublime.

Wish you were here,