The judgment was against us as the Federal Court decided that the purpose of the RFA Act was not to protect the environment.

They claimed that the protection of Tasmania’s forests and wildlife was ensured by the Forest Practices Code and other policies, which are written by the Tasmanian Government. However, these policies are not legally enforceable, and the court has stated that there is no need for them to be so. This means that there are no enforceable laws that are protecting our threatened species’ habitat from destruction.  The Full Court noted the laws could be enforced through terminating the RFA.

We have 28 days to lodge an application for special leave to appeal. Our lawyers will need to convince the High Court the case is important enough for it to hear the appeal. We will be specifically referring to the Graeme Samuel’s Review of the EPBC Act which has found that the RFAs are not protecting our environment.

We have achieved a lot over the duration of the Great Forest Case. We have managed to halt logging in over 4,000 hectares of critical Swift Parrot habitat. We will be asking Forestry Tasmania not to log these areas until there is a decision on our application for the High Court appeal, and if we are successful in securing a High Court hearing, until a Judgment is given.

The legal costs for the application to the High Court could be $150,000 or even more if we have to cover costs if we lose.

What did our Federal court case argue?

Secondly, in Tasmania, the State Government can change its legislation, policies, forest practices codes and management plans how and when it pleases, without input from the Commonwealth Government. This essentially allows the State Government to make up the rules as it suits and gives no guaranteed protection for our wildlife and environment.

This case was run under the Environmental Protection and Biodiversity Conservation (EPBC) Act to protect the habitat of endangered species.

Why is it needed?

Our legal case is the best chance in a generation to end native forest logging.

Over a million hectares of Tasmania’s forests are still under threat from logging. This includes large stretches of old-growth forests, such as in takayna / Tarkine. Home to Australia’s largest temperate rainforest, takayna / Tarkine currently has over 28,958 ha of its pristine forests in “permanent logging zones”. 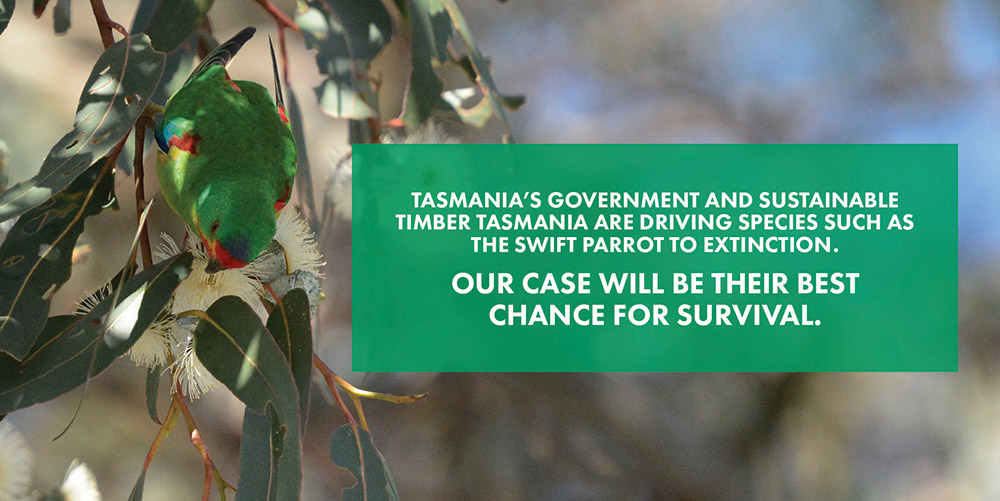 Several of our iconic species are seriously under threat from logging, including the Swift Parrot, Masked Owl, Tasmanian Devil and Giant Freshwater Crayfish. Of these, the species under the most serious threat from logging is the Swift Parrot. This charismatic bird is currently listed as critically endangered and is likely to go extinct in the next 10 years. The Tasmanian RFA currently allows for Swift Parrot habitat to be logged. Our case is a major step towards protecting our threatened species in native forests.

Tasmania’s Government and Sustainable Timber Tasmania are driving species such as the Swift Parrot to extinction and this case is their best chance for survival.

It's time we have native forests evaluated by environmental scientists for protection of intact forests and endangered species, not by the foresters who are evaluating the forests for logging.