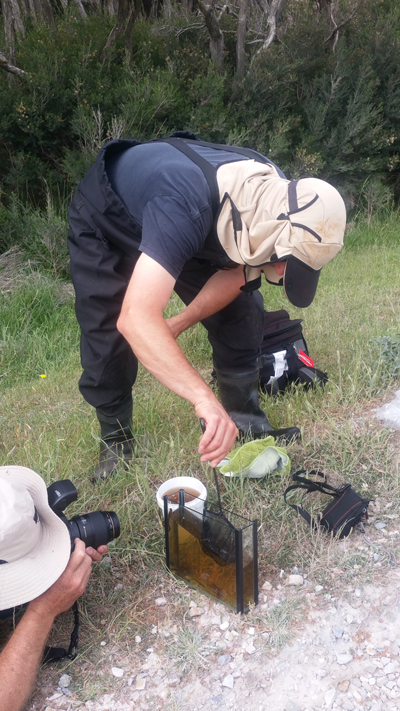 We jump in and drive in convoy towards Temma, a tiny shack township on the Tarkine coast. We are to go to our farthest site first them make our way back towards camp, stopping at many sites along the way. We pull up at our first site, a small culvert beside the road. It doesn't look promising. Our freshwater experts snap into gear; pulling on neoprene waders and flap caps, carrying nets, white trays and countless vials.

Scientists Stuart Rose and Greg Martin wade into the water and start scooping with gusto. Two amatuer aquatic enthusiasts John and Phillip Littlejohn go about filling a tiny fish tank with water and preparing trays for specimens. Within minutes the first fish is found, a species found only in Tasmania, the mudfish Neochanna cleaveri.

Greg is clearly excited, this species has been found in this creek two years before, but not last year. It's back! He explains that these fish lay their eggs on the high water mark, which are washed out to sea on a high tide. They spend their juvenile years in the ocean before making their way back inland for adulthood. We all gather around the tiny tank for a look at the fish, perhaps 4cm long and brown. The name of the creek? It didn't have one until these scientists named it Mud Fish Creek.

At our next site as Greg, Stuart and Phillip scoop they discuss the impact of last year's fire, which burnt huge swaths of the Tarkine. They found shield shrimps here last year, but none are to be found today. They hypothesise that the annual changes might be due to the fire. A change in water chemistry perhaps? 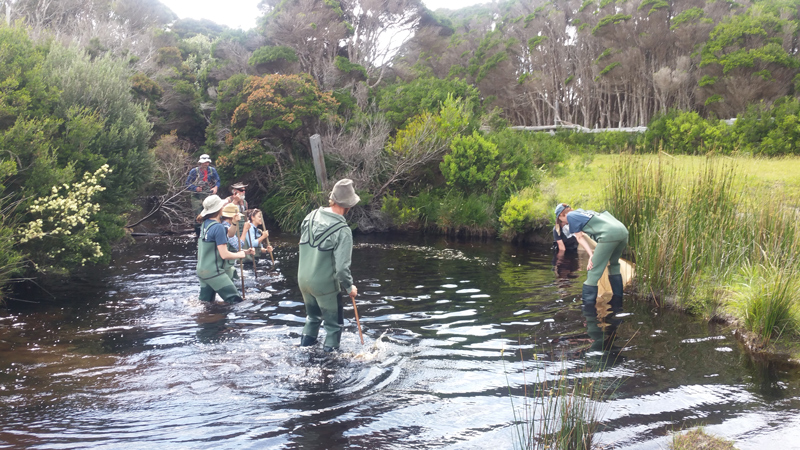 A thick layer of azolla coats the water here, making netting difficult. It's so thick an earthworm is living within it. It seems it is the only thing living here when Greg scoops a small fish; a Congolli (Psuedaphritus urvilli). It is a striking fish with a stripe running along its body into its eye. This is perfect habitat for these ambush predators, brackish and slow moving. Greg keeps dragging his net through the azolla saying “this is Congolli stew here”.

Meanwhile Phillip has found a Galaxia truttaeous specimen, another fish that can move between land and sea. It must be quite the sight when fully grown to 12 inches. The fish are fawned over and photographed carefully by John before we head on to our next site.

The third site is a bigger, faster flowing stream, stained a maroon brown by tannins. This is the big moment for the participants to get involved. Donning overalls most of the group jump in the water upstream, armed with nets on long poles. Two hold a seine net downstream and an offshoot escape is blocked. On Greg’s call those upstream start moving towards the seine net scraping and banging the stream bed. They move in formation towards the net, herding the fish in.

Another fish is added to our list, as Galaxia maculata is captured. Further on yet another Galaxid species, the Climbing Galaxis (Galaxia brevipinnis) is found. This species was fairly easy to identify as it has thicker,fleshier fins for climbing up waterfalls to reachogether we have captured 5 species of fish in these barely noticeable streams. And everyone is having a great time, getting involved. 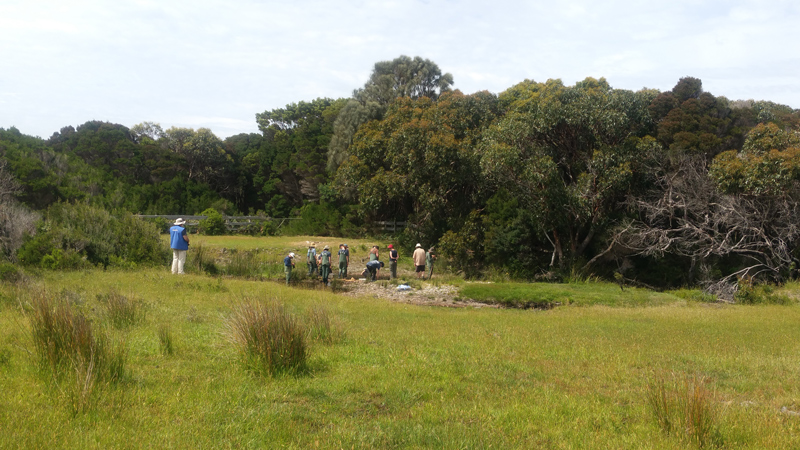 As we drive back to camp we pass over  rumble strips across the road and signage reminding us that the threatened Tasmanian Devil lives here. This is part of the mitigation measures to minimise Tassie Devil deaths on the roads here, and I am reminded of the Nelson Bay River Mine, where there is a risk of acid waste polluting the Nelson Bay River, home to another threatened species, the Australian Grayling. I think about how important it is to understand where and how species live to better protect them. After all, here small drains were habitat for a diversity of fish.