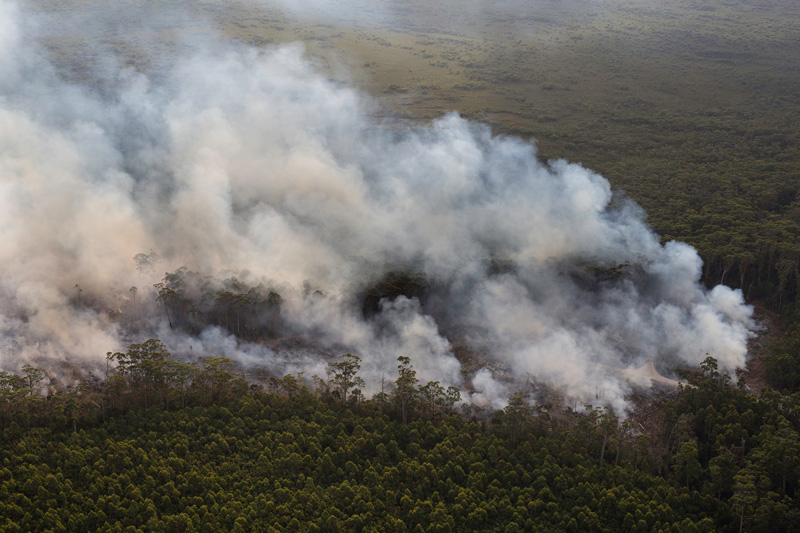 “Forestry Tasmania and the Tasmanian Government continue to ruin our Autumn days with their burns after logging, tonight the capital city of Hobart is experiencing an embarrassing sunset among logging fire plume. Forestry Tasmania has burnt hundreds of hectares today from Swift Parrot habitat on Bruny Island to ancient forests in the Huon Valley and Styx. More post logging fires have also been carried out in the Tarkine. Meanwhile the Minister has attempted to discredit conservationists today who criticise this archaic damaging practice,” Bob Brown Foundation’s Campaign Manager Jenny Weber said.

The Bob Brown Foundation has refuted the misleading claim by Forestry Tasmania that yesterday’s fire escape from the regeneration burn on coupe TE008P did not enter an adjoining reserve.

"A map produced from Forestry Tasmania's own web page interactive map tool, shows that there is no gap between the coupe and the reserve. Any claim that it had not reached the reserve is misleading", said Bob Brown Tarkine Campaigner, Scott Jordan.

"Forestry Tasmania has admitted to the fire escaping. Our concern that there was no active monitoring of this 30 hectare burn remains unanswered,” Scott Jordan said.

Mr Jordan has also been surprised by statements by Tasmanian Government Minister Barnett.

It appears the Minister is referring to an area additional to what was I observed at 3.20pm yesterday.

Attached is a photograph showing the fire escape on TE008P (viewing north west, Photo: Grant Wells), and a map taken from Forestry Tasmania's interactive map viewer, marked with the location of the two fire escapes.