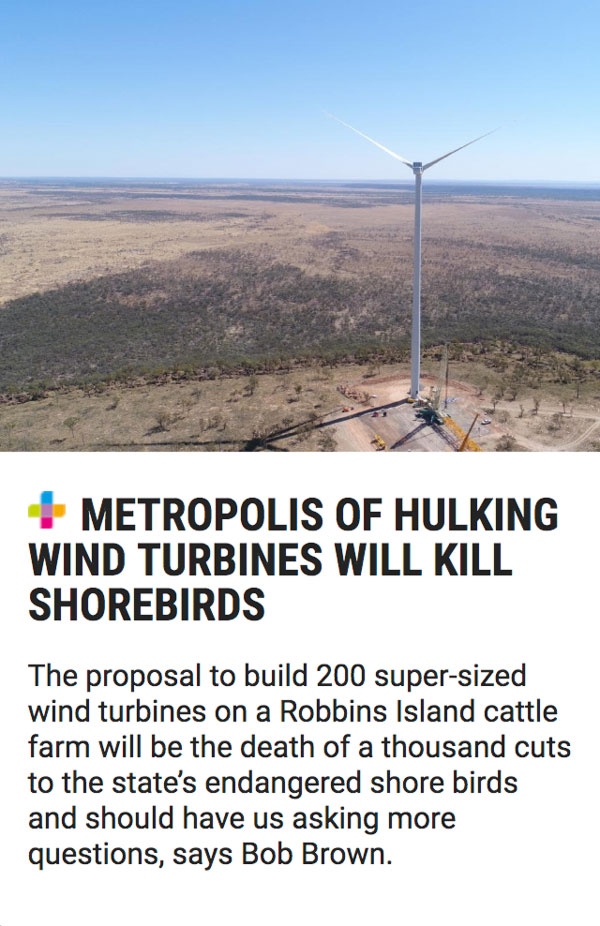 Its eye-catchiness will divert from every coastal scene on the western Bass Strait coastline. The diminutive Nut at Stanley is 143 metres high. With the wind farm on Robbins Island, the Nut will be left the 201st highest coastal structure west of Table Cape (180 metres) if you only consider the towers.

Tasmania already has more than enough electricity to meet its own needs. So the Robbins Island power output is to be exported to the mainland via a new submarine cable.

The Hammond family has owned Robbins Island since 1958, agisting and then farming Wagyu beef cattle. The arrangement between the Hammonds and UPC is not known.

UPC is a multinational corporation which claims that “We are a leading renewable energy developer in the Asia Pacific region with over 20 years of global experience and a proven history of being a successful early entrant in new markets and tackling complex projects”.

The company also says that “UPC-formed companies have developed more than 4500MW operating wind and solar projects and secured more than US$8.4 billion of project debt and equity. UPC now owns operating projects in China, the Philippines and Indonesia and is developing a project pipeline of more than 6GW in Australia, China, the Philippines, Indonesia, Vietnam, India, Taiwan, Korea and Tunisia.” Perhaps that means the Robbins Island power will cross the equator.

The world needs energy efficiency and renewable energy to replace fossil fuels, and fast. However, as with the Harmony Hotel proposal, this Robbins Island wind farm is an aileron too far.

Firstly, the Tasmanian public, including the people of the North-West of the island, has not been properly informed of the private deals, or public impacts or cost-benefit analyses (economic, social, cultural and environmental) of this, one of the biggest wind farm projects on Earth.

Here are a few concerns. Besides the impact on the coastal scenery, wind turbines kill birds. Wedge-tailed eagle and white-bellied sea eagles nest and hunt on the island. Swift parrots and orange-bellied parrots traverse the island on their migrations.

The transmission lines are planned to cut through wild and scenic Tasmania, including the northeast Tarkine forests and (until local outrage led to a sudden change) the Leven Canyon, en route to Sheffield and then the new export cable beneath Bass Strait. Why not use the more direct, much less environmentally destructive route aligning the Bass Highway? Better still, in the name of private enterprise, why not UPC build its own cable under the Strait from Robbins Island straight to wherever?

Tasmanians have a right to know much more about the Robbins Island development. It is a huge resource extraction venture which will be lighting up no Tasmanian homes. Beyond the indisputable environmental losses, what is the guaranteed money this giant venture is returning to the state of Tasmania as against UPC’s foreign stakeholders?