This new film by Tasmanian wilderness photographer and filmmaker Dan Broun was produced for our campaign to protect the Tarkine. 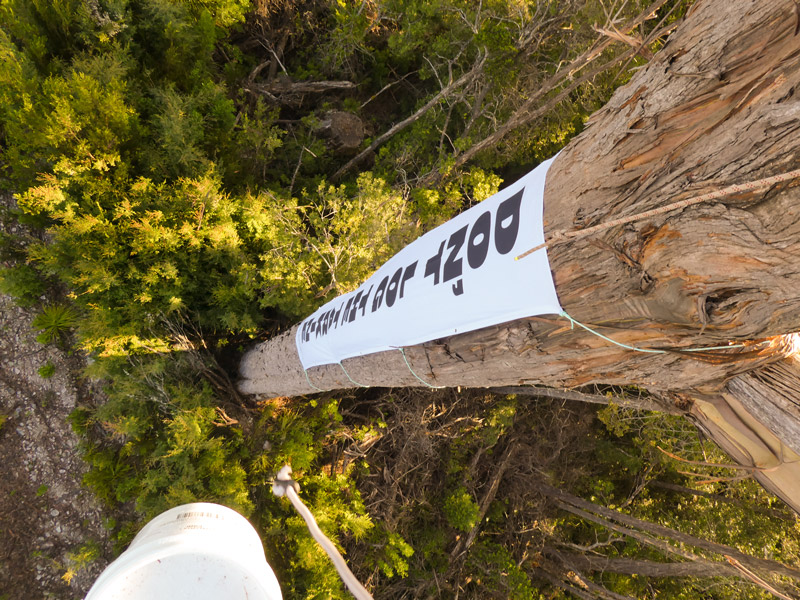 "Being here in this forest is so powerful. Tonight, the endangered Masked Owl perched near the camp. How can Forestry Tasmania even contemplate destroying this ecosystem?

A Wedge-tailed Eagle flew right above my tree this afternoon and we saw a juvenile Tasmanian devil the first night we were here. Where will these precious creatures go after this forest is destroyed?" 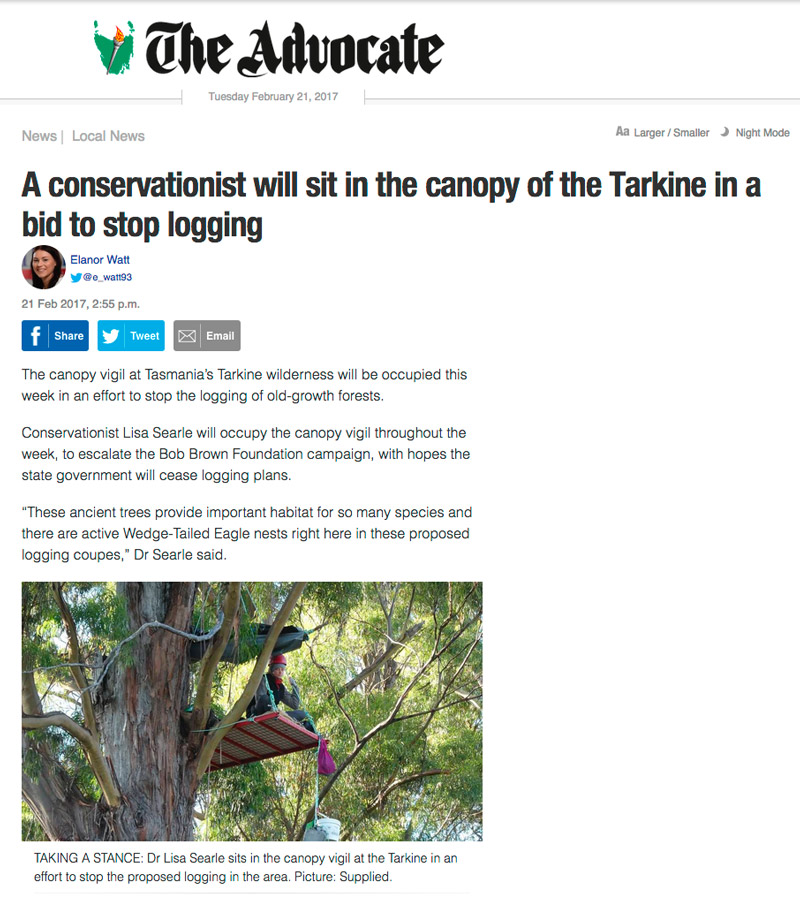 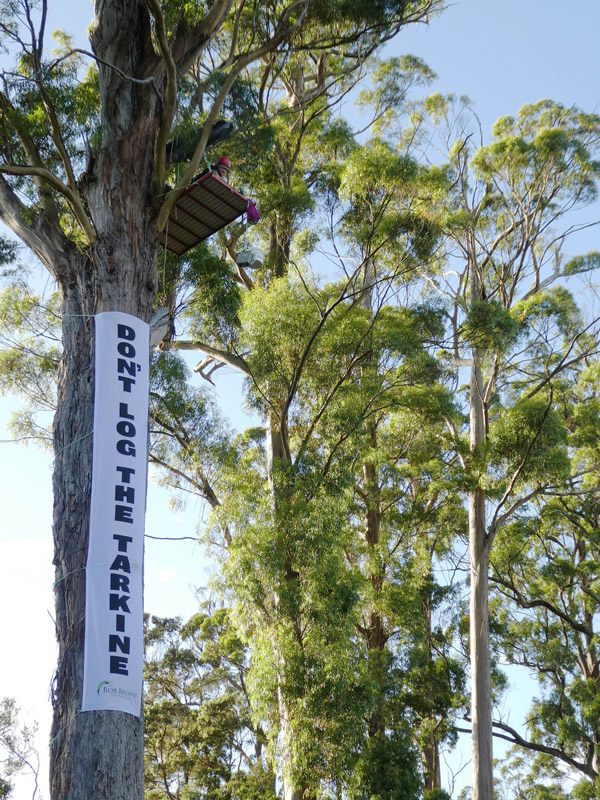 A vigil in the canopy of threatened ancient forests in Tasmania’s Tarkine has been established by conservationists. Bob Brown Foundation have escalated their campaign this week to highlight the looming loss of globally significant forests to logging.

“If Tasmania’s Government continue with plans to log the Old-growth forests of the Frankland River in the Tarkine in the coming weeks, we will lose an extraordinary tract of ancient forests, critical habitat for many species and have harmful impacts on one of the best habitats for the world’s largest freshwater crayfish, the Astacopsis gouldi,” Bob Brown Foundation’s Jenny Weber said.

Dr Lisa Searle, who will occupy the Canopy Vigil for the coming week, is hoping that Federal Environment Minister, Premier Hodgman and Forestry Tasmania will get the message and cease plans to log these forests.

“These ancient trees provide important habitat for so many species, and there are active Wedge-Tailed Eagle nests right here in these proposed logging coupes,” Conservationist Dr Lisa Searle said. "Being here really makes you realise how incredibly unique and amazing this place is."

“Last week community members occupied the threatened forests and broadcast the conservation values. This week our community occupation of these remote forests continues. There is still time for Premier Hodgman and Federal Environment Minister Frydenberg to protect these globally significant forests and halt the proposed logging,” Jenny Weber said. 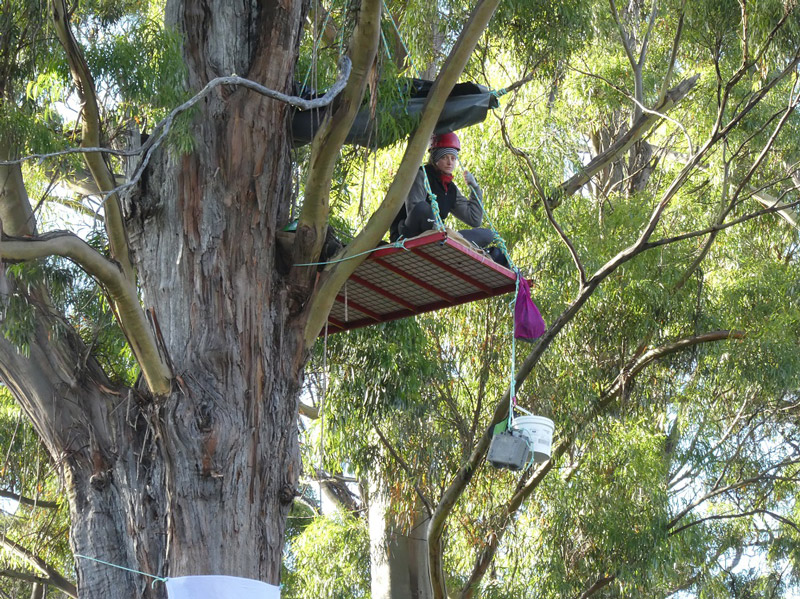 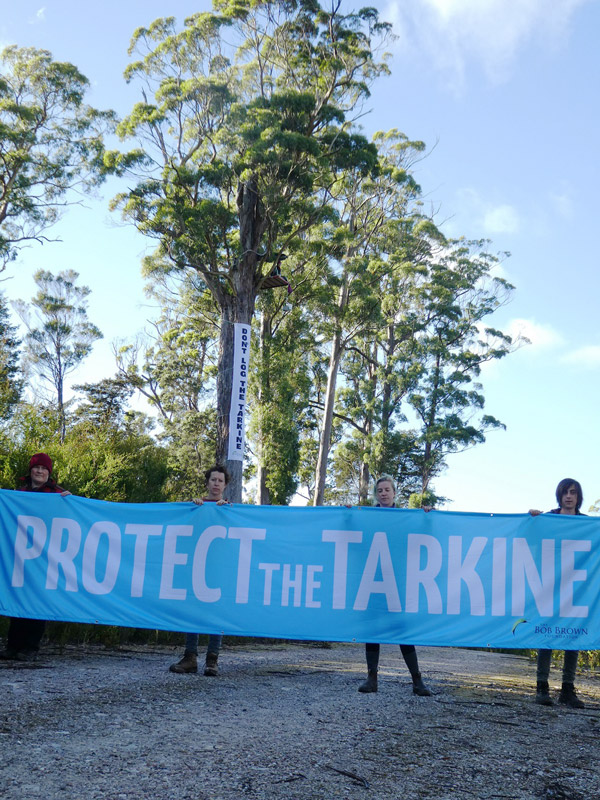 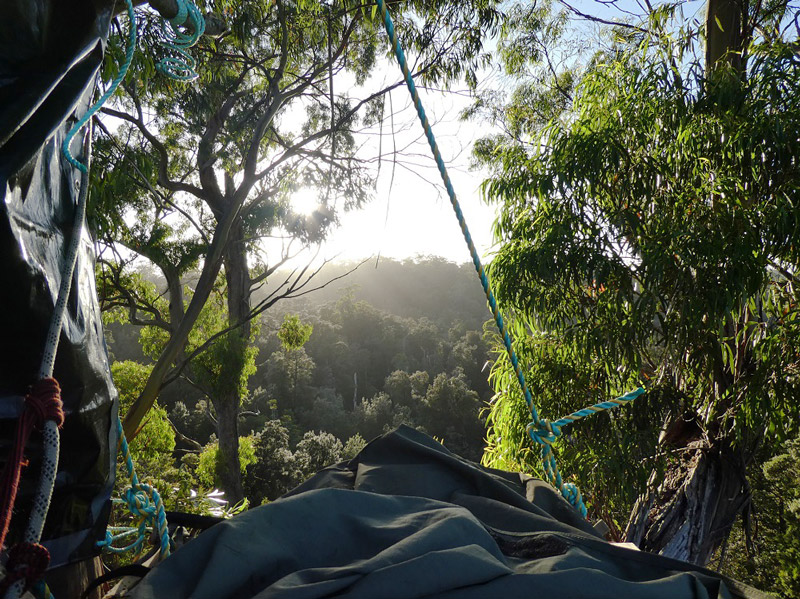 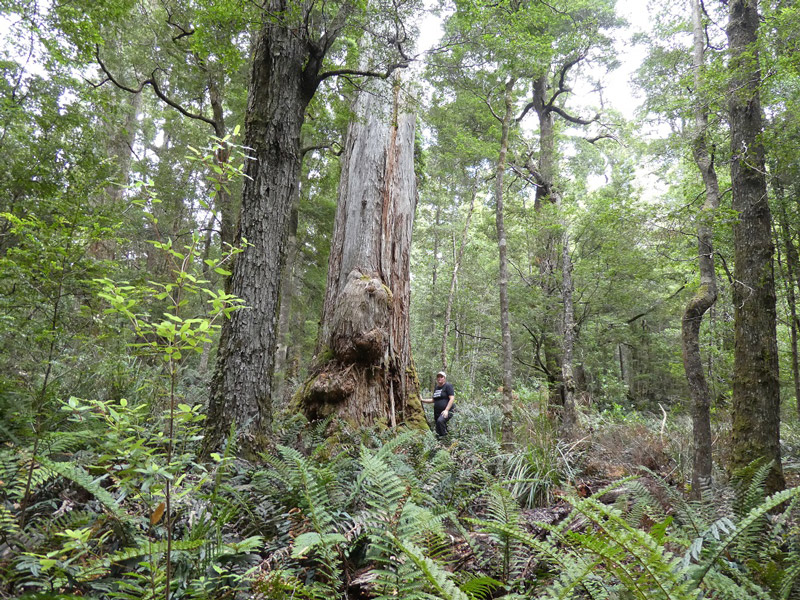 Conservationists at Bob Brown Foundation have released photographs of threatened Old-growth forests in Tasmania’s Tarkine, taken last week after campaigners and community members spent the week in the remote forests documenting their values.

“While in these threatened forests we sighted endangered species, the Wedge-tailed eagle and Masked Owl.  We are calling on the Federal Environment Minister and Tasmanian Premier Will Hodgman to halt the proposed logging of these forests in Tasmania’s Tarkine,” Jenny Weber said.

“Forestry Tasmania have told us they intend to log these ancient forests on the banks of the Frankland River in the coming weeks. Our advocacy campaign for the protection of these forests has included protests in Hobart and Melbourne, a new website launched to rally citizens to protest and visiting the threatened forests to document their values before they are lost forever,” Jenny Weber said.

Bob Brown Foundation launched a new website, ActionforTarkine.org last week to register community members who are interested in protesting the logging of the Frankland River forests. 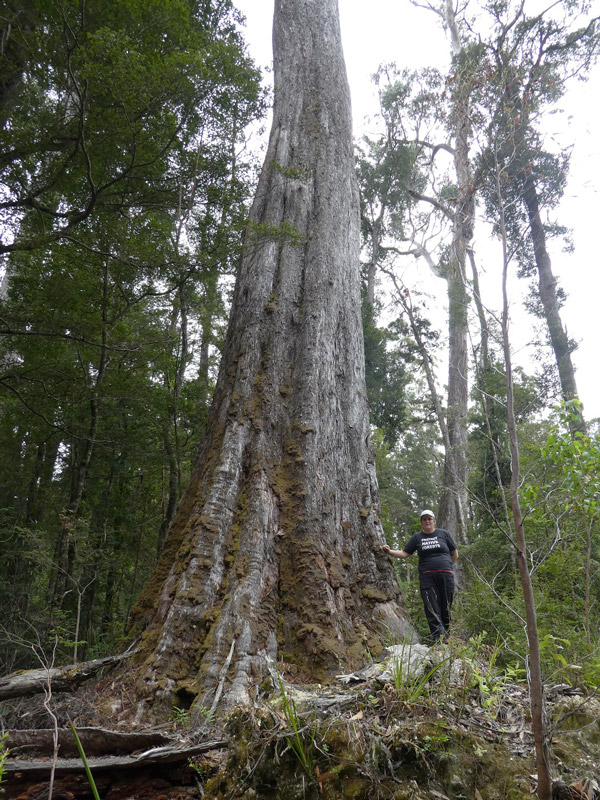 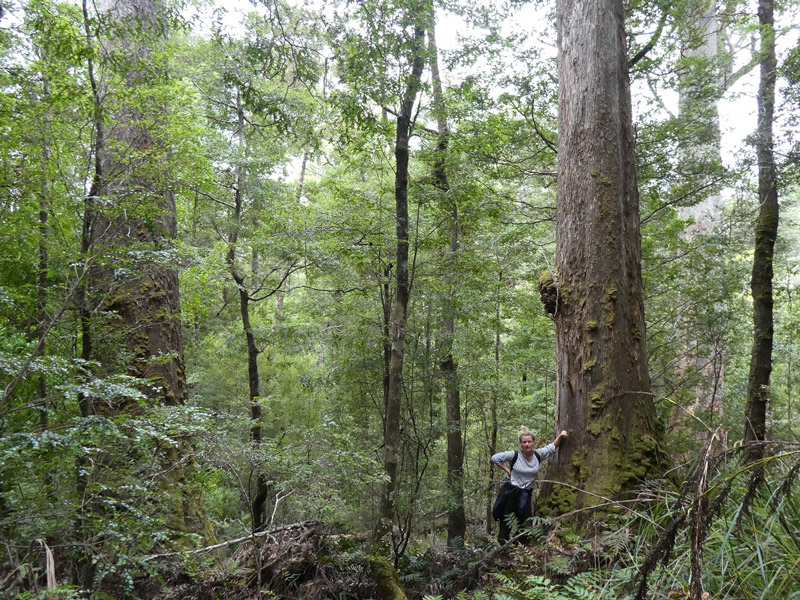 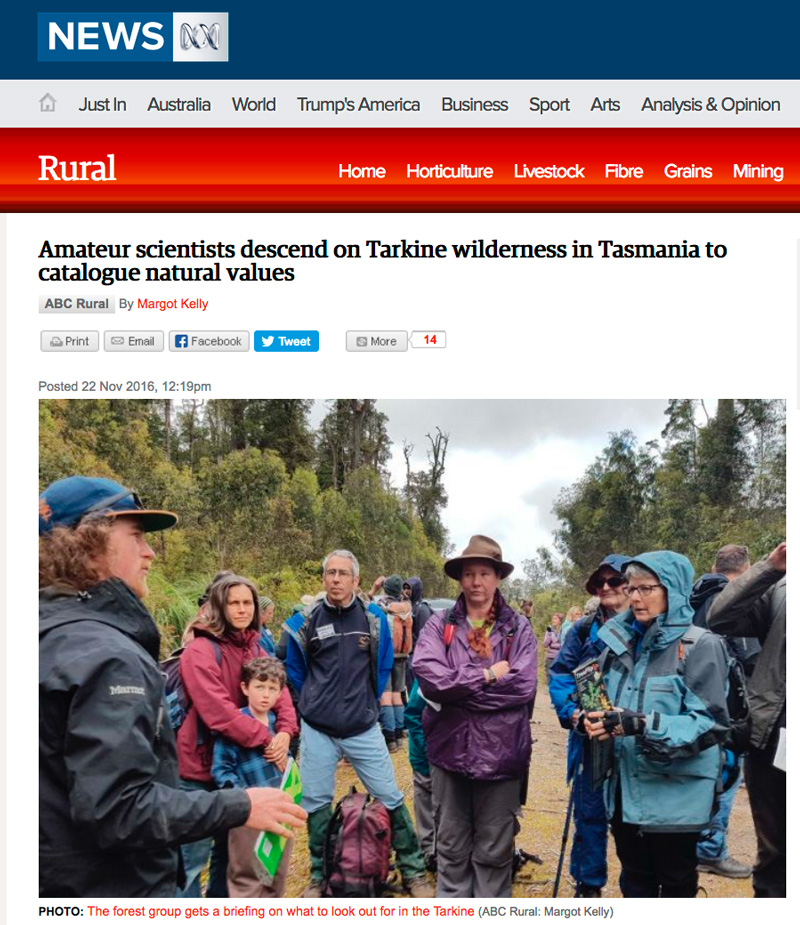 An ABC article on Tarkine BioBlitz 2016:

"Sure we are coming along Forestry Tasmania roads and it's a dear shame that there's forestry roads into some of these ancient rainforests."These forests have wedge-tailed eagle nests in them where the wedge-tailed eagles are breeding," she said.

"They have Tasmanian giant freshwater crayfish on the banks of the river. So these are rare endangered species in ancient old growth forests."

The presence of high profile threatened species in the Tarkine has been known long before the bioblitz, but Ms Weber said the bioblitz event helped raise awareness about the area.

"As environmentalists we are not naive to the fact we have a long way to go but this is a very important step.

"We have people come from the mainland to experience the place and experience it as an intact ecosystem and say, 'actually there's benefits to this place remaining intact.'"

Save the Tarkine hosts Wynyard meeting 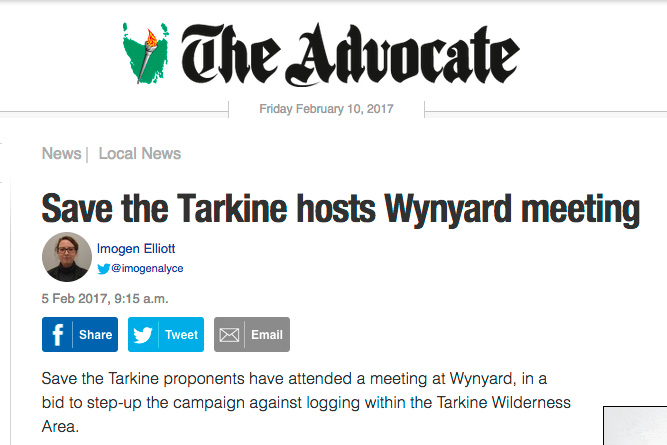 "Save the Tarkine proponents have attended a meeting at Wynyard, in a bid to step-up the campaign against logging within the Tarkine Wilderness Area.

The meeting comes as the Bob Brown Foundation turns its focus to the impact the release of land for logging could have on the freshwater crayfish population in the Frankland River. 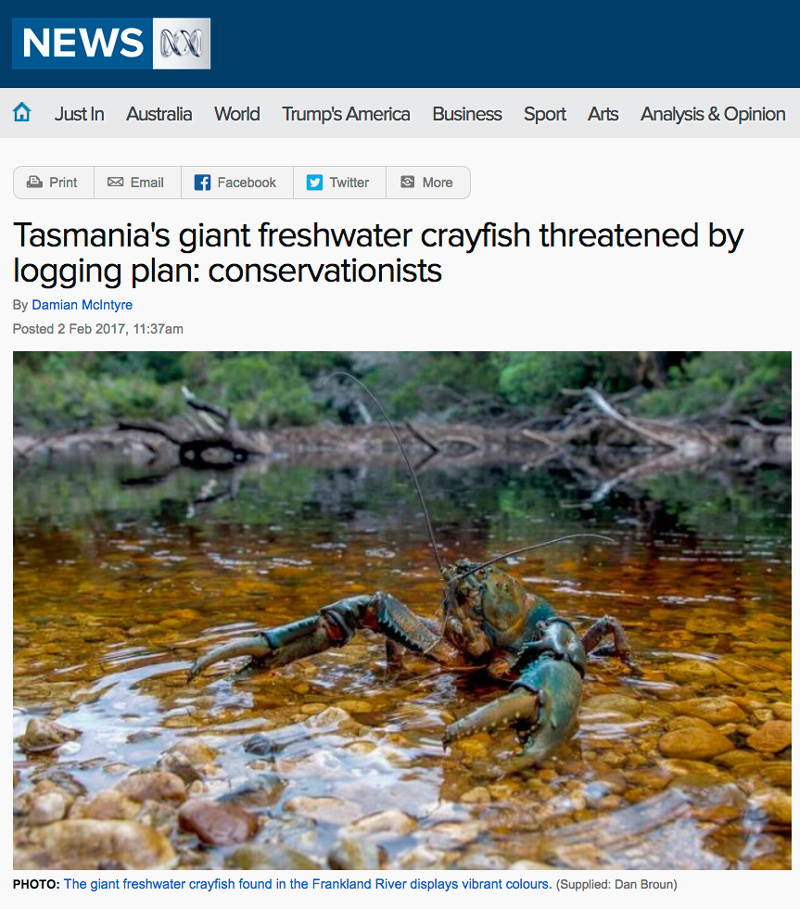 "An environmental group is stepping up its campaign against the harvesting of timber from a coupe in north-west Tasmania because of the presence of a giant freshwater crayfish population.

This week a group from the Bob Brown Foundation has been monitoring the population in the Frankland River, located in the Tarkine Wilderness Area in north-west Tasmania.

The river is within 400,000 hectares of reserve land that the State Government plans to open up for logging.

"We've found some spectacular giant freshwater crayfish, some strong blues and colours that are really unique to the Frankland catchment," he said."

Read the full story (and see all the great photos) on abc.net.au here.

Conservationists at Bob Brown Foundation are calling on the Federal Environment Minister and Tasmanian Premier Will Hodgman to halt the proposed logging of Tarkine ancient forests. Protests will be held in Hobart and Melbourne this afternoon and a public meeting in Wynyard on Sunday will address the problems with logging globally significant forests in the Tarkine.

“Logging in the Tarkine’s world heritage value forests, if allowed to proceed, will have long term devastating impacts on the environment, climate and wildlife. The intact forests of Tasmania’s Tarkine are globally unique and require protection for the survival of rare and endangered species,” Bob Brown Foundation’s campaign manager, Jenny Weber said.

“There is still time to halt this logging before the damage is done. We have friendly protests and public meetings planned from southern to northern Tasmania and over to Melbourne in the coming days to highlight the threat to the Tarkine forests,” Jenny Weber said.

“Despite our lobbying efforts to both State and Federal governments asking for protection of these forests in Tasmania’s Tarkine, logging of 75 hectares is planned to commence in the coming month,” Jenny Weber said.

“Forestry Tasmania is protecting the Forest Practices Code rather than the Giant Freshwater Crayfish. Scientific studies show that streamside reserves don’t protect the Crayfish from the impact of logging,” Environmentalist Bob Brown said.

The two areas of forest are currently under a Wedge-tailed Eagle breeding season exclusion zone, which ends on the 10 February. Conservationists have been told by Forestry Tasmania that logging is planned after the restriction is lifted.

Upcoming Events – Friendly vigils will be held TODAY to draw attention to the issue out the front of Premier Hodgman’s Hobart office and Federal Environment Minister Josh Frydenberg’s office in Melbourne. 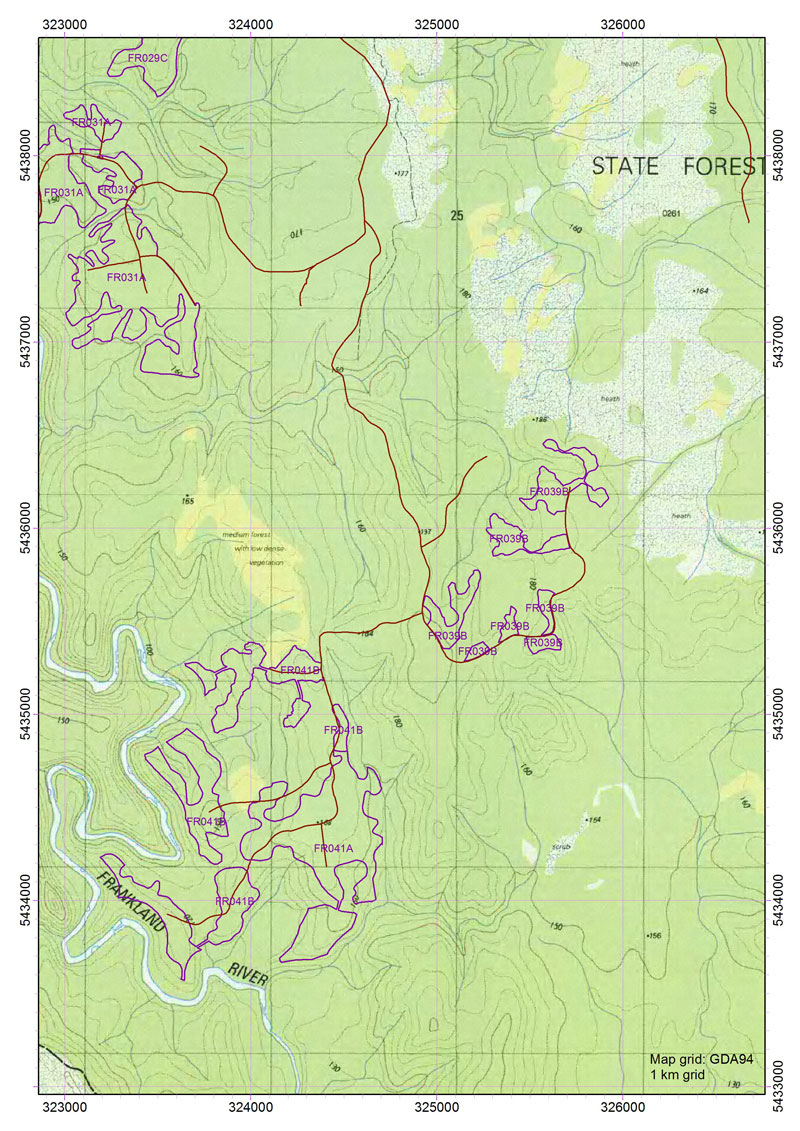 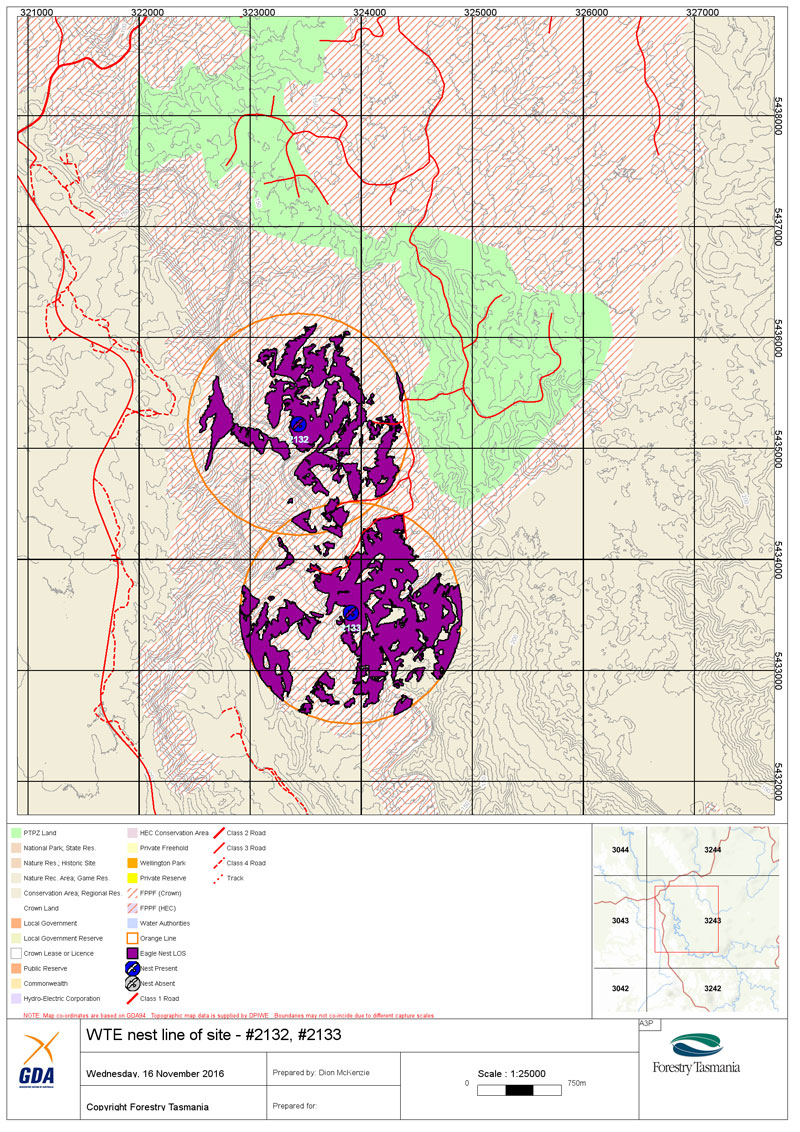