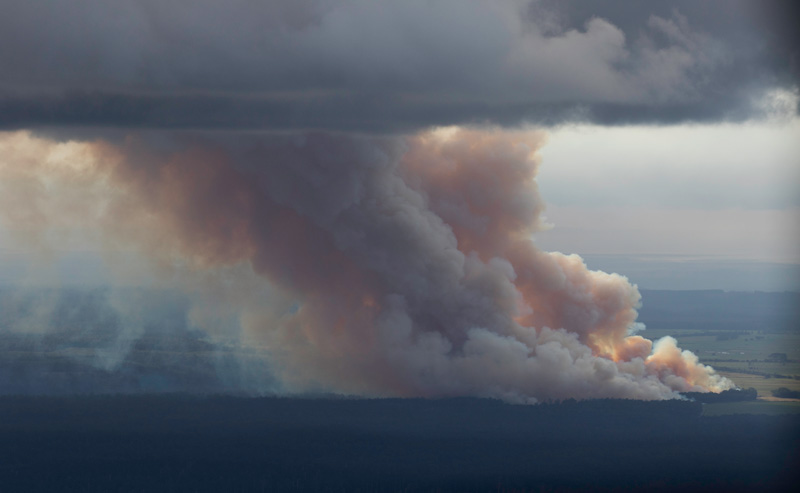 The Bob Brown Foundation has today condemned the ongoing burning of logging areas across Tasmania and continues to call for a ban on all post-logging burns. After a Forestry Tasmania post-logging burn escaped yesterday in the Tarkine, conservationists are calling for these burns to be banned to remove the climate, ecological and public health damage that these fires cause. Releasing surveillance images, Bob Brown Foundation has shown the impact of these high-intensity burns and the escaped fire near Temma.

“Tasmania’s logging industry makes a shameful and massive contribution to annual greenhouse gas emissions every year, by logging vast swathes of native forests and then burning the timber left on the forest floor after logging. The fact is that the 20 burns across the state yesterday by Forestry Tasmania included areas of forest that should not have been logged at all. They were once habitat for endangered wildlife and massive storehouses of carbon,” Bob Brown Foundation’s Campaign Manager Jenny Weber said.

At 3:20pm yesterday, a monitoring flight by the Bob Brown Foundation observed and reported that a Forestry Tasmania regeneration burn had escaped the coupe boundary and was burning into reserved forests.

The Bob Brown Foundation funded helicopter spent ten minutes circling in the area. At the time of the observation, it was clear that there were no Forestry Tasmania personnel present. The fire escape was immediately reported to Forestry Tasmania.

"This is a landscape still recovering from devastating fires in the summer of 2016 and to light a 43 hectare fire and walk away from it is inviting disaster,” Scott Jordan said.

The escaped fire was burning in a reserve with high conservation values, 6km southwest of the Arthur River township. This reserve is subject to the Forestry (Unlocking Production Forests) 2017 Bill currently before the Tasmanian Parliament.

"We called this breach in to Forestry Tasmania before it became a larger incident. The taxpayer funded logging agency should be removing this risk from our forests and community by ceasing the ongoing burning after logging,” Scott Jordan said.

"The public is owed an explanation for this negligence. Furthermore the public and our intact native forests are owed a future without these destructive post-logging burns that contribute to pollution, threats to human health and damaging climate impacts,” Jenny Weber said.