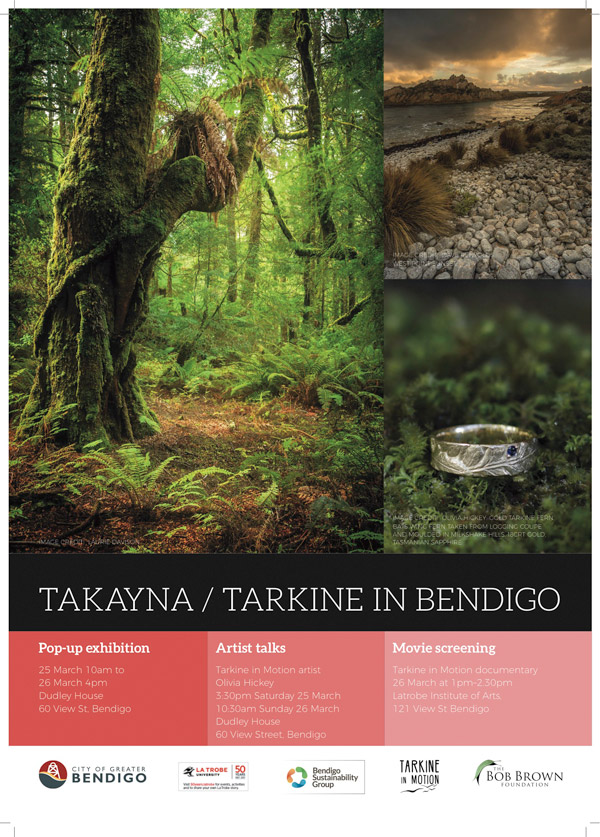 I’ve just returned to Hobart after a fantastic couple of days sharing the Tarkine in Bendigo. I was really lucky to be involved with such a beautiful bunch of passionate people that have donated so much time and energy into creating the events that occurred there over a couple of days.

There was a pop up exhibition of photography, painting and jewellery in Dudley House. I estimate about 150-200 people wandered through the exhibition over the two days that it was up. The opening was well attended and I did two artist talks over the weekend where it was lovely to share my story.

On the Sunday there was a BBF stall in the Festival of Cultures in Rosalind Park - a hive of activity and colour.

There were two screenings of the Documentary Tarkine in Motion and both were very well attended with both Venues feeling very full and around 90 people got transported into the place and met the people who were part of the project.

In all places there were so many conversations about this sacred place inspired by the imagery from this place.  Many people inspired to visit the Tarkine and to lend their voice and energy to protect this place. My utmost thanks and gratitude goes to the others who made this happen, Phil Robertson, Emma Wasson, Rosemary Glaisher and Liz Martin and a number of others who volunteered their time and resources to help make a great weekend happen.