An article by Ted Mead in The Tasmanian Times 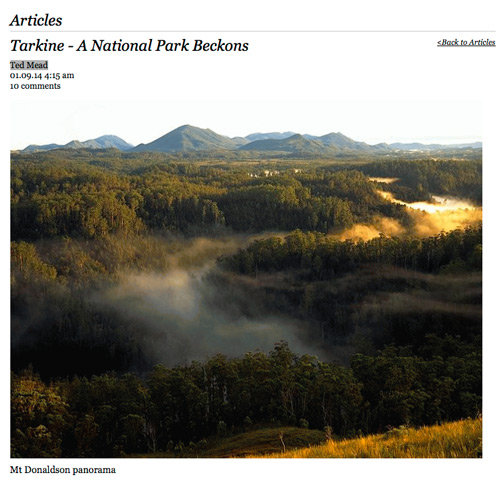 Home to the largest single tract of temperate rainforest in the nation, the destined Tarkine National Park will soon become an economic natural goldmine for Tasmania’s northwest.

In the late 1980’s the Tarkine region bounded by the Arthur and Pieman rivers was identified by conservationists and scientists as a significant area that warranted secure protection. Renowned for its magnificent tracts of pristine rainforest, wild rivers, and windswept coastline rich in cultural heritage and history, the Tarkine is certain to be proclaimed as a National Park in the next decade.

Approximately 450,000 hectares of the Tarkine has already been identified as to fulfill the natural and cultural criteria for World Heritage listing. The lateral extension of the Western Tasmanian Wilderness to include the Tarkine is a longer-term certainty, though a more secure “National Park“ status should be the imperative, which will entitle the region to stronger protection.

Currently a significant proportion of the Tarkine region is in formal reserves. These Conservation Areas and Regional Reserves are representative of the natural and cultural heritage values of the Tarkine. Excluding the recently revoked TFA forestry zones, most of Tarkine is considered non-contentious regarding resource extraction.

The areas outside these formal reserves (within the greater Tarkine) are unlikely to be designated to any form of state protection given they are registered as State Forest production zones, mineral leaseholds, freehold land or identified as to be of high resource prospectivity.

Relating these facts to the above map (shaded in green) it is clear that an extensive area of the Tarkine should be without ado dedicated into a National Park immediately.

Central to an envisaged tourism-based economy within Tasmania’s northwest region, many of the peripheral roads have been recently sealed with such intent. This has been initiated through the likes of the Cradle/Coast Authority, the Waratah and Circular Head Councils, and other tourism lobby associations who have recognised the extensive potential of the Tarkine for posterity.

There is simply no reason why a Tarkine National Park shouldn’t be proclaimed now.  Furthermore the future additional status of “World Heritage” will ultimately provide funding and comprehensive management of the region.

Over the past 30 years on the West Coast of Tasmania, history attests to the economic prosperity that tourism brings to a region through statutory reserves, which has protected the natural, cultural and historic heritage.