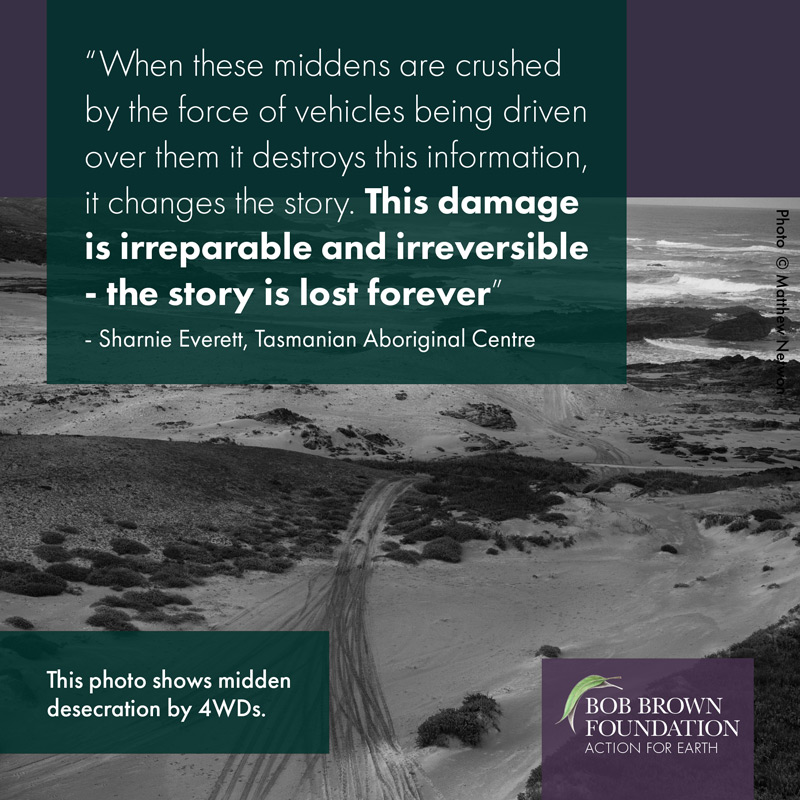 “This decision is a strong message to the Hodgman Government that their stance regarding 4WD access to the Western Tasmanian Aboriginal Cultural Landscape (WTACL) is clearly wrong. They have not been capable of showing a way forward that will not impact and cause irreparable damage to the ancient Aboriginal heritage, cultural and natural values,” Sharnie Read said.

“The Hodgman government cannot be trusted to protect, manage or value this significant landscape and should return the area to the rightful owners, the Tasmanian Aboriginal community. This is the only way we can be assured the area is afforded the protected and conservation it deserves,” Sharnie Read said.

“Now the Federal Government have recognised their role, they must also accept responsibility and stand up to our intransigent state government and do what needs to be done to protect this national heritage listed landscape. It is a national shame to have vehicles smashing through one of Australia’s most significant and richest Aboriginal heritage landscapes, where critically endangered and other threatened species rely on an intact wild coastline for survival. These tracks need to stay closed,” said Bob Brown Foundation’s Campaign Manager Jenny Weber.

"Actions speak louder than words. The Tasmanian government tried to ride roughshod over due process for political advantage with a constituency who have been riding roughshod over priceless Aboriginal heritage of the ages. It's time to show respect, back off, and elevate protection of this special indigenous heritage above base politics." Peg Putt, Markets for Change said.

"This is a welcome decision that gives yet another opportunity to Premier and Aboriginal Affairs Minister Will Hodgman to prioritise leadership, good faith and what is right, over cheap, local politics and drop his plan to expand destructive 4WD tracks across an irreplaceable Aboriginal cultural landscape," said Vica Bayley, Campaign Manager, The Wilderness Society Tasmania.

“Protecting the natural shorebird values protects the cultural values present on these remote beaches – both of these have been present for thousands of generations, and deserve better than the Tasmanian Government’s callous disregard for them in preference to destructive 4WDs,” said Dr Eric Woehler, Birdlife Tasmania.

"Premier Hodgman has an opportunity to abandon this destructive policy. Or he can push ahead with three and a half years of community conflict and disrespect of this outstanding Aboriginal heritage", said Save the Tarkine Campaign Coordinator, Scott Jordan.