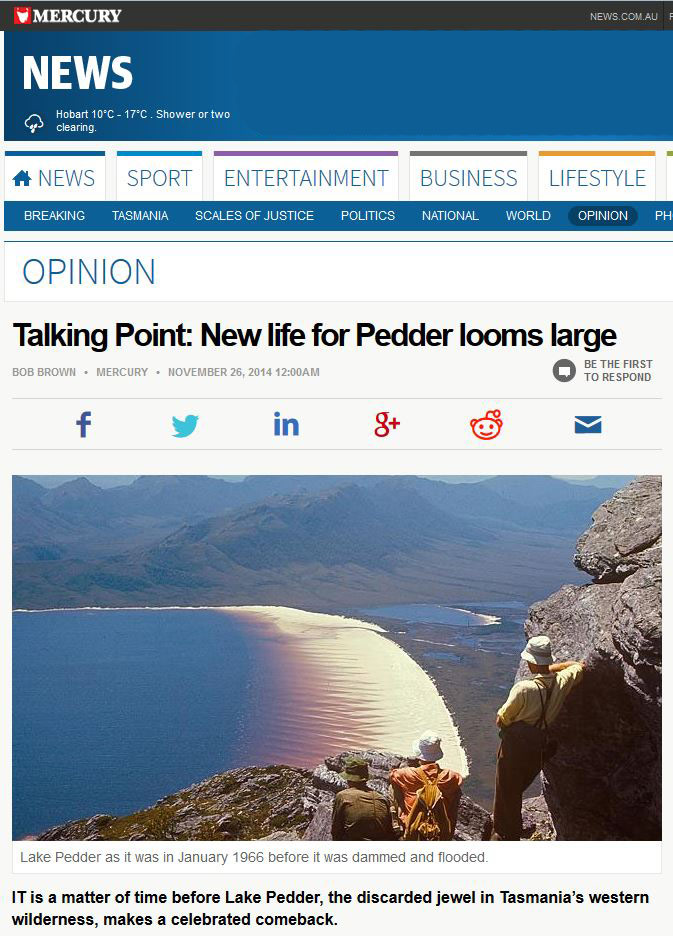 It is a matter of time before Lake Pedder, the discarded jewel in Tasmania's western wilderness, makes a celebrated comeback.

Nestling 300m high between the Frankland Range and the Coronets peaks west of Maydena, the lake was formed as the last Ice Age receded.

It was two kilometres square with a glorious pale-pink sandy beach 500m wide along its eastern margin.

Such was its beauty and magnetic attraction that Lake Pedder became a mecca for bushwalkers and campers from all over Australia.

In 1955, nine years after the first plane (piloted by Lloyd Jones) landed on its beach, the Lake Pedder National Park was declared to protect the lake's scenic beauty.

In 1972 the Hydro-Electric Commission dammed the Gordon River and its tributary Serpentine River as well as the upper Huon River at Scotts Peak and the national park was obliterated.

Lake Pedder was flooded to a depth of 15m.

The top floodwaters were fed north to the Gordon dam to provide 6 per cent of the state's current power output.

The loss of Lake Pedder — its beach, dunes and the Serpentine River, together with its unique native trout, insects and plant species — created an international furore.

It was condemned by the International Union for the Conservation of Nature, Prince Phillip, Sir Edmund Hillary and Sir Garfield Barwick among many others. However the fact that no Labor or Liberal member of the state parliament at the time gave voice to the growing public support for saving the lake (independent Legislative Council members for Huon, Ron Brown and Michael Hodgman, who succeeded him, were exceptions) led to the foundation of the world’s first Greens party, in Tasmania, in 1972.

The promised tourism bonanza to the HEC's "new and improved" Lake Pedder — trout fishers aside — failed.

In a Tasmania renowned for wild rivers and pristine lakes, few people opted to visit the artificial impoundment bubbling methane from its flooded rotting vegetation.

The road to Strathgordon, built with federal money to facilitate the dams, carries fewer vehicles today than it did in the mid-1970s.

However Tasmania is transforming.

Its future prosperity and jobs will be based on the attractiveness of the island’s fortune of fresh air, fine foods and pristine nature.

This changing tide is causing a rethink.

The long, patient campaign to restore the original Lake Pedder National Park is taking shape. Tonight's showing of the film Damnation at Hobart's State Cinema is a sign of things to come.

Damnation looks at the removal of dams from American rivers, notably from the Elwha River near Seattle in the state of Washington.

Since 2010 two concrete dams on the Elwha — higher than those on the Serpentine and Huon — have been removed to restore the river and its salmon run.

Fish ladders built around the Elwha dams in the 1920s failed, the river's salmon run was reduced by 99 per cent. There are high hopes that the Elwha will see that legendary salmon run come back.

It cost $300 million to remove the dams from the Elwha but the returns began accruing immediately. Indigenous Americans who depended on the salmon are celebrating, along with environment groups and the public — and the grizzly bears are happy.

However, as other dams are slated for removal (more than 1000 smaller dams or weirs have gone from US rivers in recent years) protesters with banners, stickers and spit-roasts have set up a Save Our Dams movement — that’s part of democracy.

When Lake Pedder's restoration gets under way we can expect some Save Our Dams bumper stickers here too, along with the sprinkle of Drain Fake Pedder stickers already out there.

Calls for restoration of Lake Pedder have continued since 1974 when the Sydney Liberal MHR and barrister Edward St John, after a federal committee of inquiry into the flooding, wrote: "The day will come when our children will undo what we so foolishly have done."

In 1995 another Sydney federal Liberal MP, Tony Abbott, wrote a poignant call for the recovery of Lake Pedder in The Australian. He described the original lake as "an internationally recognised environmental treasure".

In 2009 Mr Abbott, by now the Leader of the Opposition, told a public audience: "My first public disagreement with the former prime minister, Mr Howard, was over my proposal to drain Lake Pedder."

Visitors would flock to see the transforming landscape as a scientific and technological team implemented and monitored the management of the lake's restoration. The recovery would be worst at first and in some ways it would simulate the emergence of Lake Pedder after the Ice Age, though not so slowly.

Divers confirm the tyre-tread marks of the last planes to take off remain visible across the submerged beach. This fits with the assessment of the HEC before the dams were completed in 1972 that 50 years after flooding there would be "not much disturbance" of the submerged landscape because there is not much movement of water beneath the upper layer of the impoundment.

Modern Hydro Tasmania's sterling commitment to restore the Lagoon of Islands on the Central Plateau last year points the way but the task of restoring Lake Pedder is monumentally greater.

The Hydro's global reputation as a green power supplier would soar. It is likely to retain the Scotts Peak dam for the mitigation of floods down the Huon River.

These days the electricity produced by the 1972 scheme flows largely through the Bass Strait cable to supply the peak load for Melbourne's breakfasts and for its air conditioners after work.

In the 1995 words of Tony Abbott, now our Prime Minister: "Draining Lake Pedder may be good politics as well as good sense. Distaste for extreme green demands is no reason to reject sensible parts of their agenda ... a federal government could commission a definitive cost-benefit study and, given a favourable result, to fund the restoration as an important national project. Tasmanians may be hard to convince, but that’s no reason not to try."

The Prime Minister is the best-placed Australian to make this grand national vision a reality. His plan to restore Lake Pedder, if implemented, would engender support from across the political spectrum.

Celebrated Tasmanian artist and centenarian Max Angus, who made many trips to paint the original Lake Pedder and whose latest exhibition in Hobart is alight with living watercolours of the lake, also keeps alight the spirit of the 1970s campaigners: "I continue to paint it. I've never succumbed to the feeling that it's gone forever. It will be drained."

Originally published in The Mercury, November 26 2014

Information agout the Hobart screenng of Damnation may be found here.