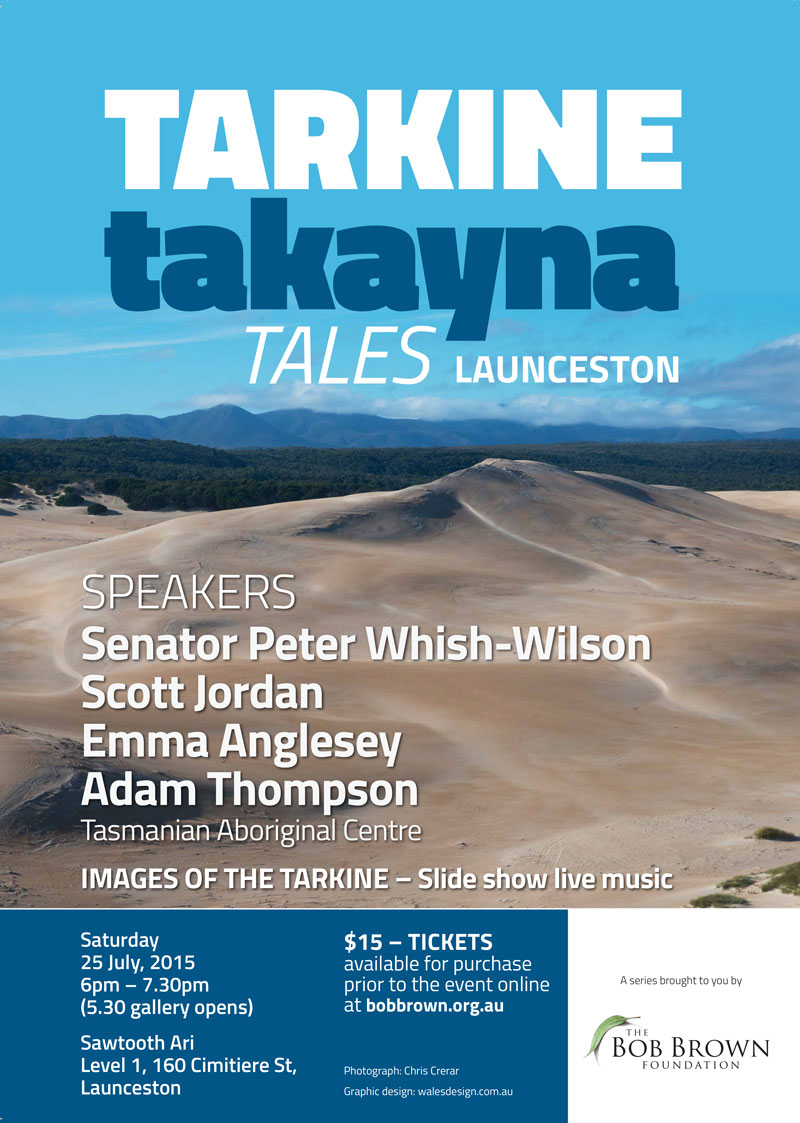 Tasmania’s Tarkine will be the topic of a public event in Launceston this Saturday night, as Australian Greens Senator Peter Whish Wilson, Tasmanian Aboriginal Centre’s Adam Thompson and prominent campaigners come together to talk about the threatened landscape and the campaign for its secure protection.

Emma Anglesey who toured with Guy Pearce last year and played with Katie Noonan in Launceston last week for Festival of Voices will perform at the event along with Launceston's Jyun Yyan Ng on the shakuhachi.

Bob Brown Foundation’s Campaign Manager Jenny Weber “Tasmania’s Tarkine is one of the world’s last wild places and the remarkable natural and cultural values of this region need to be preserved for future generations. At the Bob Brown Foundation we are campaigning for a Tarkine National Park and World Heritage listing for 450 000 hectares, touring our Tarkine Tales events is one way that we can engage and inform people in the community to call for the Tarkine protection.’

Tasmanian Greens Senator Peter Whish-Wilson will be a guest speaker on Saturday night, “I recently visited the Tarkine and saw what looked like deliberate vandalism of areas of cultural significance to the Aboriginal community that had been fenced off. Off-road motorists are taking down protective fences to ride roughshod over Aboriginal middens.  While Will Hodgman turns a blind eye to policing this area, while no people are being fined for this kind of transgression, we essentially have state-sponsored vandalism of our precious cultural heritage in Tasmania," Senator Peter Whish Wilson said.

Tarkine National Coalition’s Scott Jordan also speaking at the event states, “The Tarkine is a collection of ancient and magnificent landscapes that feed the souls of those fortunate enough to witness it’s majesty. Our tale is of the struggle to protect this remarkable place.”

The Bob Brown Foundation is hosting a series of events about the Tarkine, with guest speakers, live music and photographic presentations, called Tarkine Tales. Integral to our campaign to protect the Tarkine is to host public talks for the community to hear tales from the advocates past and present working for protection of this wild place, see images of the Tarkine and help raise funds for the Foundation’s Tarkine campaign.

Tarkine Tales in Launceston will be held this Saturday night 25 July, starting at 6pm, at Sawtooth Ari at Level 1, 160 Cimitiere St.