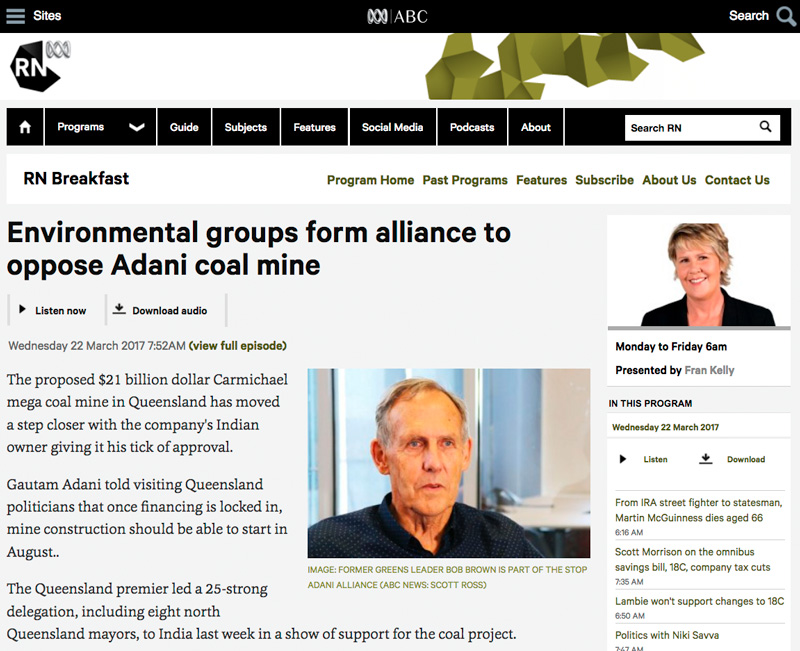 In a last ditch effort to stop the Adani coal mine project, 13 environmental organisations are coming together today to launch the Stop Adani Alliance.

Listen to the interview on ABC RN here.

Bloomberg has an article by Perry Williams on the Stop Adani Alliance: 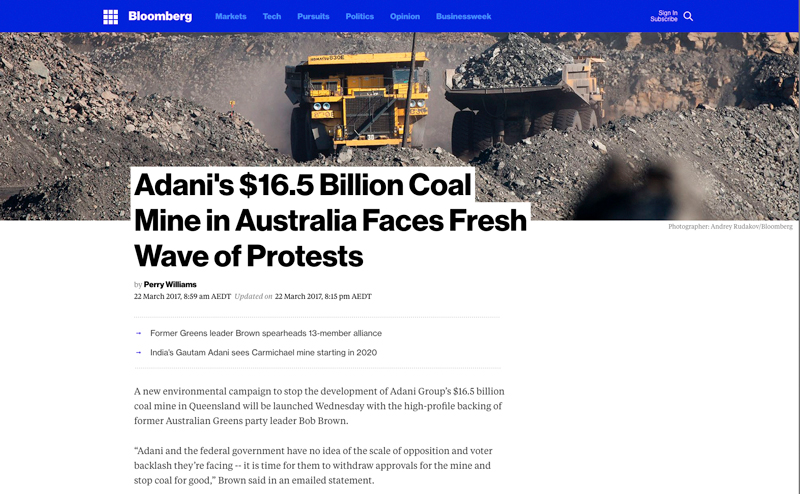 The environmental protesters are “demonstrating against jobs” in Australia and “economic and social development in India,” a spokesman for Adani’s Australian unit said in an email Wednesday.

The Guardian has an article by Paul Karp on the Stop Adani Alliance: 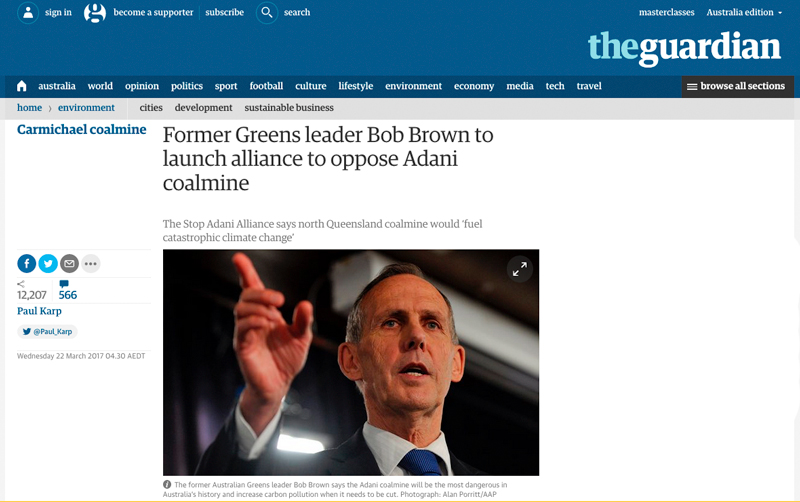 The Stop Adani Alliance will lobby against the coalmine in northern Queensland, citing new polling that shows three-quarters of Australians oppose subsidies for the mine when told the government plans to loan its owners $1bn.

Former Senator, Dr. Bob Brown said, “People are coming together to draw a line in the sand with Adani, just as previous generations did with the Franklin River dam. In fact, the Stop Adani campaign reminds me of the Franklin in many ways, the level of passion and commitment will turn this into a nationwide showdown.

“Adani’s coal mine will be the most dangerous in our history, ramping up global carbon pollution precisely when emissions need to be drastically cut.

“Adani and the Federal government have no idea of the scale of opposition and voter backlash they’re facing - it is time for them to withdraw approvals for the mine and stop coal for good.”

New polling shows three quarters (74.8%) of Australians want Adani to fund their own infrastructure rather than rely on a $1 billion taxpayer subsidy HERE. This comes on the back of recent polls which reveal: the majority of people (63%) think the best thing for Australia would be for Adani to invest in large scale solar not a new coal mine HERE and that Adani’s Carmichael coal mine is a threat to the Reef and should not go ahead (67%) HERE.

Alliance spokesperson, ACF President and businessman Geoff Cousins AM, who flew in yesterday from a Stop Adani tour of India, said “Australians don’t want this dangerous coal mine. It’s clear from new polling that the community are with us - they know coal is a dirty, dying industry.

“The Government and the Labor Party must categorically rule out any public funding for the mine. This is no time for the Federal Government to be handing over taxpayer money for the most polluting project in Australia that will fuel global warming.”

The new polling also shows that: the majority of people polled (60%) understand that the mining and burning of coal fuels global warming impacts such as heatwaves, bushfires, floods, droughts and more severe and frequent storms and nearly two thirds (64.1%) believe governments should wait for the consent of Aboriginal traditional owners rather than pushing ahead with the mine.

Ms Millie Telford, National Co-Director of the Seed Indigenous Youth Climate Network, said “Adani’s mine will destroy country and the climate forever and devastate the ancestral lands, waters and culture of Aboriginal peoples in the region as well as Indigenous communities who are already on the frontline of climate change.

“State and federal governments are doing Adani’s dirty work for them working to ram through changes to both native title and water laws so their dangerous mine goes ahead, in the face of opposition to the mine from the Wangan and Jagalingou peoples.

“New polling shows that nearly two thirds of Australians believe that state and federal governments should wait until the consent of the Wangan and Jagalingou people is secured.

“As Aboriginal and Torres Strait Islander young people, we have a responsibility to protect country and are rising up against this destructive coal mine. We are proud to join the Stop Adani Alliance and to stand with over two million people around the world who have already taken action to stop this mine.”

Photos: Headshots of Alliance members and relevant stills [LINK]. Vision of launch and strategy
session will be made available for download here [LINK].

Dr. Bob Brown
In a career of outstanding public service, Dr. Bob Brown served 18 years as a Federal Senator (1996-2012). He was leader of the Australian Parliamentary Greens between 2005 and 2012. Prior to this, Dr. Brown served 10 years in Tasmania's state parliament (1983-1993), including during the period of the Labor-Greens accord of 1989-1990. Dr. Brown’s contributions to public life have extended far beyond his contributions in parliament. He also played a role in the formation of the Wilderness Society and the Bush Heritage Foundation and was a key leader in the Franklin-Below-Gordon dam campaign.

Geoffrey Cousins AM. President of the Australian Conservation Foundation
Geoffrey Cousins is an Australian community leader, businessman, environmental activist and writer. Geoff’s many achievements include leading the George Patterson Company while it was Australia’s largest advertising agency, and overseeing the building of the Optus network. He has served on many public company boards, founded the Starlight Children’s Foundation in Australia, was founding chairman of Sydney’s Museum of Contemporary Art, and is a former director of the Sydney Theatre Company. In 2014, he was awarded an Order of Australia for his service to the community. As an environmental activist he is best known for his contributions to successful campaigns to stop the Gunns pulp mill in Tasmania, and the proposed Woodside gas hub in the Kimberley.

Amelia Telford, Seed National Co-Director
Amelia Telford, a young Aboriginal and South Sea Islander woman from Bundjalung county, is the National Co-Director of the Seed Indigenous Youth Climate Network. Amelia is passionate about supporting a national grassroots network of Aboriginal and Torres Strait Islander young people to protect country from the impacts of fossil fuel extraction and climate change, and to be part of creating positive change for young indigenous people. She’s been awarded 2014 National NAIDOC Youth of the year, Bob Brown’s Young Environmentalist of the Year 2015, and Australian Geographic Young Conservationist of the Year 2015, all for her commitment to building a just and sustainable future for all young people.

WHAT: Bob Brown launches ‘Stop Adani Alliance’ of 13 key community organisations, to build the biggest movement in Australia’s history to stop Adani’s dangerous coal mine and push for a ban on new coal mines.