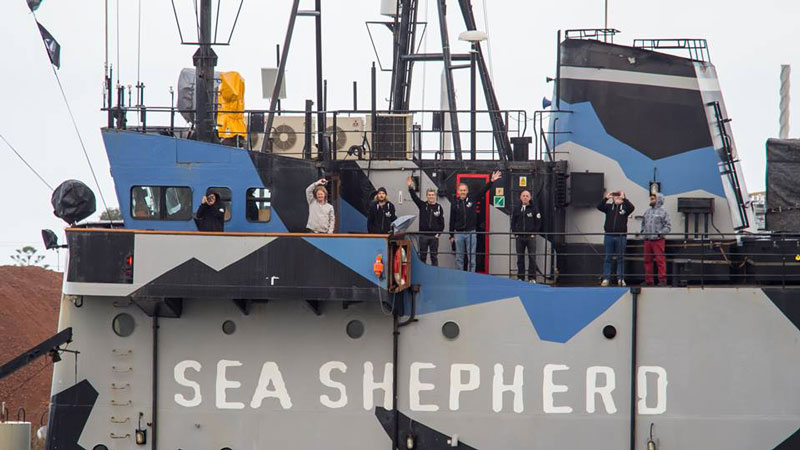 Today the Steve Irwin vessel arrived into Port Adelaide as part of Sea Shepherd's Operation Jeedara, and the Great Australian Bight Alliance. This is the first time a Sea Shepherd vessel has come into port in South Australia. Operation Jeedara's mission is to showcase the beauty of the Bight, a place rich in beauty and biodiversity, to show what we would all loose if BP were allowed to drill for oil and cause a spill in waters deeper, rougher and more remote than the Gulf of Mexico.

"What we have witnessed and captured of the Great Australian Bight is nothing short of remarkable. Australians should be proud of the Bight, for its a grand wilderness of global significance that is on par with the Galapagos and with that, the Great Australian Bight is easily worthy of world heritage nomination and no place for BP's monster oil rig. Our job is to share the wonder and beauty of the Bight to all Australians and the world, for if they can care half as much about the Bight as we do, we hope they will unite with us with all they can to stop BP from putting the bight at risk, for loosing this battle against BP is not an option," Jeff Hansen, Expedition leader, Operation Jeedara, Bight defence campaign.

BP and the backers of this very risky venture are holding the Australian public to ransom with the notion of more jobs, however the reality is that even BP has stated in their own environment plan that jobs during the exploratory phase would be negligible and its worth noting that the company that has won the tender for the choppers in Ceduna is in fact a Texas based company. Many of the skilled workers on the rig would also come from outside of Australia. However, even taking away the environmental risk, what BP also threaten is more than $440 million dollars per year worth of fisheries employing thousands of workers and in excess of $1.2 billion dollars per year in tourism employing in excess of 10,000 people. Even purely from an economic sense, its not worth the risk," Mr Hansen concluded.

"The Great Australian Bight should be World Heritage: for its whale calving places, its seal colonies, its island banks lined with thousands of pelicans, other sea birds, its great white sharks, dolphins and healthy food chain, undersea canyons, cliffs, beaches and rich Aboriginal heritage. The real arbiter between this vision for Australia’s future and BP’s last century plan for a dangerous deep-sea oil exploration is our Prime Minister, Malcolm Turnbull. In 2016, Mr Turnbull holds the fate of the Great Australian Bight’s natural life and beauty in his own hands," Bob Brown commented.

"It was a great honour to be asked by Jeff Hansen and Sea Shepherd to join the expedition concerning the preservation of the Great Southern Ocean and the Great Australian Bight. We began the journey at the Head of the Bight and I was mesmerized by the sight of 20-30 female Great Southern Right Whales with calves lavishing in the bay less than 100 meters from shore. It was quite obvious from the outset that this nursery, is and has been, there for eons. We then moved on to Isle of St Francis where we had the privilege of going to shore where Australian Sea Lion and Long Nose Fur Seals greeted us. What looked like a barren land from afar was lush with Cape Barren geese, parrots and a myriad of yellow and purple flowers covering the island. We then sailed on to Baird Bay where we had the privilege of swimming with sea lions in a pristine environment as if never touched by man at all," said Australian actor David Field.

"I’ve never really had the honour of visiting the Great Australian Bight and I am completely taken aback by the beauty of the coastline and marine life above and below the water. I have had the privilege to explore under the water at Folwers and Baird Bays and although everyone talks about the beauty of the Great Barrier Reef, from my experience, the Great Australian Bight should have the same levels of protection. People just don’t know what is available within these areas; tourists are sometimes lucky enough to stumble upon these places, which is good in a way, as the places remain remote. Part of our crew are from overseas, including myself, and it is ludicrous that a bunch of foreigners need to show the Australian Government the reasons why this area is so important to preserve for future generations," Captain Wyanda Lublink remarked.

“BP’s proposal to carry out deep sea drilling in the Great Australian Bight shows a complete disregard for all life on this planet. Risking one of the last great wilderness areas in a push to expand the fossil fuel industry is the height of irresponsibility. There is no alternative but to rapidly transition away from fossil fuels if we are to provide our children with a liveable climate. The Australian Government must serve the interests of the people it’s elected to represent, not overseas corporations. This is greed gone mad," said Wilderness Society South Australia Director Peter Owen.

Bunna Lawrie, Mirning Elder, "Our connection is very very important and it is vital to our elders and our traditional customs that we keep an ongoing duty and responsibility to preserve and protect. The Mirning people have cared for the greatest southern-right whale population for thousands of years. It is an ongoing friendship that we have, travelling as far as Antarctica and to New Zealand. We can not allow or permit for BP to drill here. We will fight and take legal action. The law wasn’t given for them to drill here; my grandfather did not give permission for this to occur. The imprints are left in the lands of the legend and the legacy, the great whale Jeedara. Our land is a living museum for us to share and enjoy, for all Australians and for future generations."

Though this will not be the completion of the Steve Irwin’s journey as part of Operation Jeedara, it will be an opportunity to showcase to the public the breathtaking footage we have captured thus far of the truly remarkable Great Australian Bight. There will be free public tours all weekend and all are welcome https://www.facebook.com/events/1730687557188937/

To date we have visited the Pearson Island group, the Bunda cliffs, Nuyts Reef, Fowlers Bay, Head of the Bight, Isles of St Francis and Baird Bay. We have also had to endure some large seas, which further highlight the insanity of BP’s plans to drill for oil here, seas which are tame compared to the swells of 20 metres that can preside in the Bight.

Sea Shepherd Australia is a non-profit conservation organisation whose mission is to end the destruction of habitat and slaughter of wildlife in the world’s oceans in order to conserve and protect ecosystems and species. Sea Shepherd Australia uses innovative direct-action tactics to investigate, document, and take action when necessary to expose and confront illegal activities on the high seas. By safeguarding the biodiversity of our delicately balanced oceanic ecosystems, Sea Shepherd Australia works to ensure their survival for future generations.