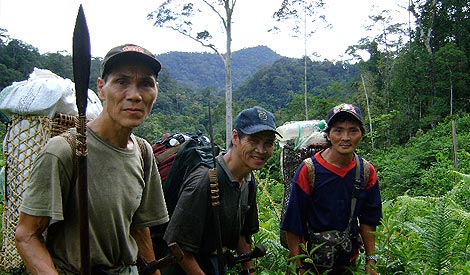 Native Sarawak people have won yet another victory, this time in a land rights claim against Ta Ann, the Malaysian corporation involved in logging Tasmanian forests.

The High Court in the Malaysian state of Sarawak has ordered Ta Ann to return 450 hectares of customary land to the native owners and pay them costs of RM 40 000 (A$16 000).  The court found that Ta Ann trespassed into the Native Customary Rights (NCR) land and cleared the area of forest. Ta Ann, along with other defendants in the case destroyed the NCR landowners' graveyard.

The Bob Brown Foundation’s campaign manager Jenny Weber said, “When the  Malaysian press is referring to Ta Ann as a "crony company" of the former Chief Minister of Sarawak Taib Mahmud, the Australian and Tasmanian governments should take note instead of financing Ta Ann to operate at a profit out of Tasmania’s own native forests.

"Tasmanian politicians should not be supporting a company that is so embroiled in Sarawak’s destructive timber and palm oil industry.

"Last week in Sarawak, the High Court ruled in favour of the NCR landowners, at Sungai Bakumah,  over the disputed 450.37 hectares of NCR land. The landowners are descendents of headman, Jebom ak Ngerembang who was buried at Pendam Bakumah.  The court accepted that the pendam (graveyard) was destroyed by the first, second and third (Ta Ann) defendants.

“There was no ground survey to determine whether there was any NCR claim in the area,” the NCR landowners' lawyer Simon Siah, from the firm Baru Bian and Advocates, told the court.

The court ordered the defendants and their employees, servants and agents to cease operations and to remove all structures and equipment from the land.

Full text of Malaysiakini article below.

Native customary rights (NCR) landowners have scored another victory against the state government and a crony company, this time with the High Court in Sibu deciding in their favour in a matter involving 450.37 hectares of NCR land.

In the decision last Friday, the court ruled for Amba anak Balleh, Munan anak Ginau, Saoh anak Marong and Agon anak Ajat, who represented the landowners at Sungai Bakumah in Igan, Sarawak, that the 450.37 hectares is their native customary rights land. They filed their case in 2012.

The government in 2007 approved a provisional lease of 4,047 hectares of land, including the 450.37 hectares, to the Land Custody and Development Authority, (LCDA) which was the first defendant in the matter.

The second defendant, Pelita Holdings Sdn Bhd, was appointed to develop the area for an oil palm plantation and subsequently, third defendant Ta Ann Pelita Igan Plantation Sdn Bhd was formed as a joint-venture company to develop all the land within the provisional lease.

The Superintendent of Lands and Survey and the Sarawak government were cited as the fourth and fifth defendants.

While LCDA is a state government agency and Pelita Holdings is a government-linked company, Ta Ann is owned by a relative of the former chief minister Abdul Taib Mahmud.

In deciding in favour of the landowners, the High Court based its decision on the historical background of the land.

The landowners are descendants of the late tuai rumah (headman) Jebom ak Ngerembang, who settled at Sungai Bakumah, Kuala Igan in the Matu district of Mukah before the Japanese invasion in 1940.

A few years after Jebom and his followers had settled at Sungai Bakumah, he and four others from Rumah Jebom applied to the Land and Survey Office in Kuching for their land to be surveyed.

This was subsequently done, with the 'antara menua' (boundary) between the NCR land of Jebom and other villagers living in the area also being drawn up.

After the survey was done and using the boundary agreed by all parties involved, the colonial British government in 1946 made record of  this agreement, which was marked in the locality plan as "communal farm land reserved for the Dayaks of Rumah Jebom".

Jebom was buried at Pendam Bakumah. However, the site of the pendam (graveyard) has since been destroyed by the first, second and third defendants.

Based on these and other factors, Judge Supang Lian ordered third defendant Ta Ann Pelita Igan Plantation to return the 450.37 hectares to the native landowners and also pay costs of RM40,000 to the plaintiffs.

The court ordered the 450.37ha to be excluded from the area under the provisional lease and for the defendants and their employees, servants and agents to cease operations and to remove all structures and equipment from the land.

Damages are to be assessed by the court registrar and to be paid by the defendants, with interest from the date of writ to full payment.

The plaintiffs’ lawyer, Simon Siah from the firm Baru Bian and Advocates, said the problem with this case was that the government did not carry out any survey and simply marked the area on the map after sighting it from the air.

There was no ground survey to determine whether there was any NCR claim in the area, Siah said.