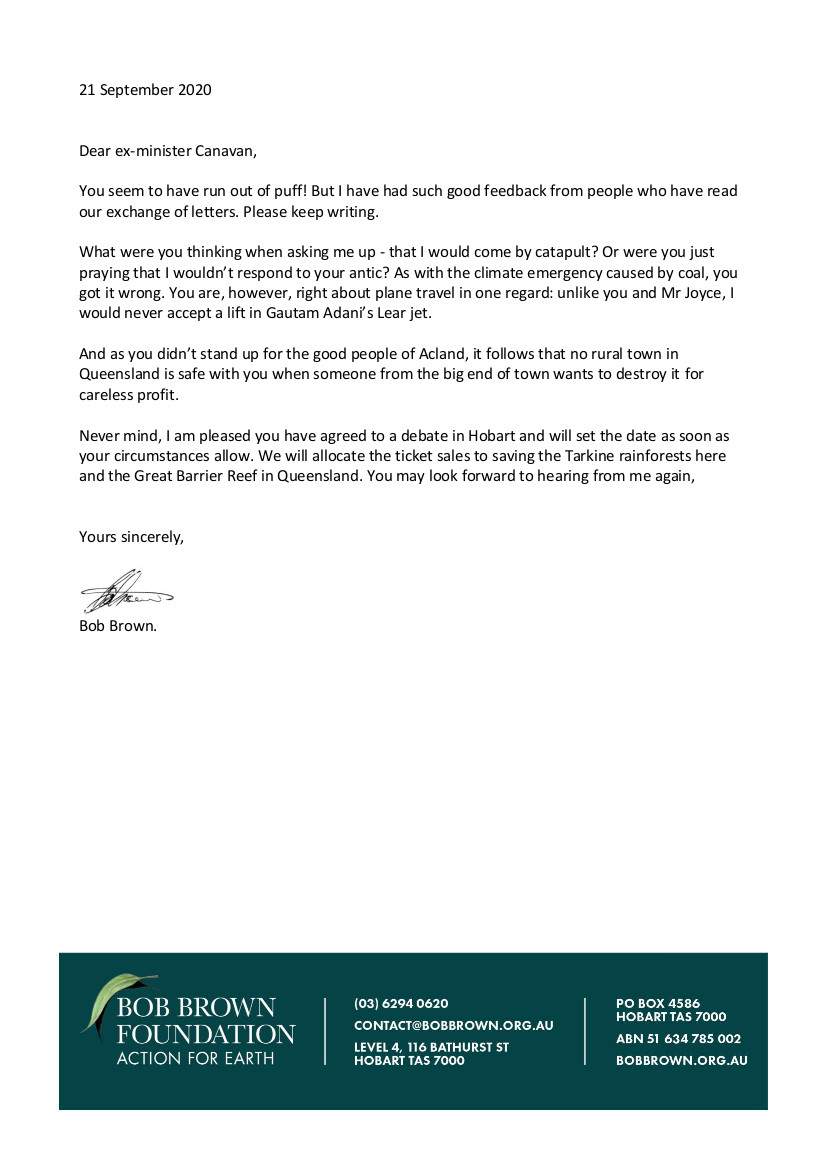 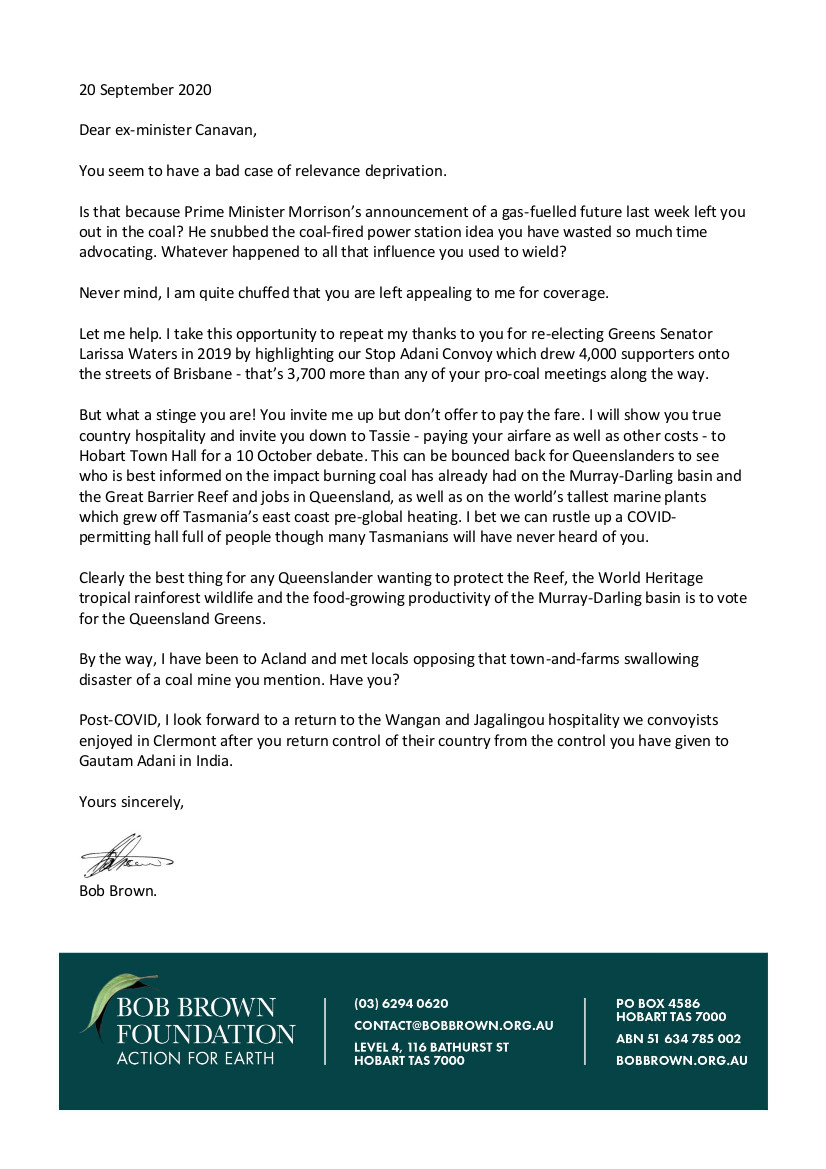 Drone footage from Sunday 13th September, supplied to the Bob Brown Foundation, has failed to locate Venture Minerals' personnel, equipment or machinery at the Riley Creek proposed mine site in takayna/Tarkine. A card left in the gate indicates not even maintenance contractors could find them.

"Perhaps Minister Ley knows their whereabouts? If not, perhaps she could organise a search party given the extraordinary lengths she has already gone to protect this prospective miner above the much needed protection for the Tasmanian Devil and Spotted tailed Quoll threatened by this mine in the southern takayna /Tarkine.

The footage shows evidence of mined and screened material from activity that occurred between 20th August and 7th September 2020, during the capital raising period.

The Morrison government’s grant of millions to study the proposed $3.5 billion Marinus link between the mainland and Tasmania is putting the cart before the horse at taxpayers’ expense, Bob Brown Foundation director Christine Milne said in Hobart today.

“Marinus is to service the so-called Battery of the Nation (BotN), the proposed pumped-storage hydro schemes in the Tasmanian highlands. But there has been no costing of the BotN which will cost more billions. Until that cost is revealed and independently checked, it is highly imprudent to be spending money advancing Marinus. That is putting the cart before the horse. It is likely the cost of BotN will make the whole project a white elephant,” Christine Milne said.

“In terms of jobs for Tasmanians, these billion would create far more jobs on projects in Tasmania servicing Tasmanians rather than draining out of Tasmania to service the mainland with expensive electricity,” she said.

Media Release: Longline horror should be banned from Hobart.

The federal and state governments should ban the longline fishing boat Antarctic Aurora from the port of Hobart, Bob Brown Foundation said today.

“Hobart is a global centre for the management and protection of Antarctica. The city’s reputation, as well as Australia’s, as a bulwark for the environmental well being of Antarctica is at stake here. This ship is unashamedly on its way to plunder Antarctica’s marine ecosystem for private profit. It will not come and go unnoticed. Just as, in the past, Japanese whaling ships were banned from Hobart and other Australian ports, so should this ship which is a giant Antarctic killing machine employing 60,000 hooks,” Bob Brown said today.

“We have written to both Prime Minister Scott Morrison and Tasmanian Premier Peter Gutwein calling on them to prohibit this ship from Hobart. If it wants to join the commercial onslaught on Antarctica’s natural resources, let it work out of China or Russia. It will not be popular here in Australia,” Brown said.

The Riley Creek mine site in takayna / Tarkine has been left abandoned in a bizarre move just days after Venture Minerals had concluded its capital raising. Venture began removing equipment and machinery on Monday, despite announcing on Tuesday that it had oversubscribed their share purchase plan and that 'funds would be primarily used to ramp up mining and processing at the Riley Iron Ore Mine.'

"While any reprieve for the Devils and Quolls around Riley Creek is great news, I suspect that shareholders will be none too happy about being played for fools."

"This is not a company that can be trusted in one of our great wild areas or with people's nest eggs.”

This is the fourth time Venture Minerals has raised capital to mine at Riley Creek.

The Australian Securities and Investment Commission was asked in August to investigate contradictory statements made by Venture to investors and the federal environment department.

Prime Minister Scott Morrison has put a pall over Australia’s Threatened Species Day by rushing legislation through the national parliament which will accelerate the extinction of the nation’s wildlife, the Bob Brown Foundation said today.

“While other Australians are marking this 7th September as the 84th anniversary of the death of the last Tasmanian tiger in Hobart’s Zoo in 1936, the Prime Minister is aping the tragic 1888 legislation rushed through the Tasmanian state parliament which put a £1 bounty on the head of each tiger and directly led to their elimination from the planet. Scott Morrison’s bill handing federal environmental powers to the states is a death warrant for more species,” Bob Brown said.

“Under the 2002 federal legislation which handed forest protection back to the states, thousands of hectares of vital habitat for species facing extinction have been deliberately destroyed by state-subsidised logging. The incredible Swift parrot is edging to extinction because of it and the koala is losing ground every day. Many more forest-dependent species are having forests cut out from under them. Morrison’s legislation will extend this environmental outcome from logging to other environmentally threatening industries. His environmental mindset is more 1888 than 2020,” Brown said.  “This is why it is so important that the nation’s watchdog, the Senate, blocks his legislation.”

“Our Foundation is launching a Summer of Swifties action plan that includes a rally to mark the five year tragic anniversary of the Swift Parrot being listed as critically endangered, a citizen science project to monitor the Swift Parrot habitat threatened by logging as the parrots return to Tasmania to breed and we will be taking action on the frontline if logging commences in any of these critical native forest habitats.  While Prime Minister Morrison fails the critically endangered Swift Parrot, citizens will mobilise to raise the alarm about its plight to extinction under the Government’s watch,”  Campaign Manager Jenny Weber said.

"The government has rushed its death-to-the-environment bill through the lower house which will see a further decline of Australia’s natural environment and nationally significant species. This bill was rushed through despite the conclusion of the Graeme Samuel’s Independent Review and ignoring its initial findings. Debate was guillotined and proposed amendments from the opposition or cross benches were left on the cutting room floor. The Morrison government will continue to ignore Department of Environment assessors or environmental advocates", said BBF takayna / Tarkine Campaigner Scott Jordan.

"The EPBC Act was created because the legacy of state-based environment management was species extinction and decline of species across the nation. The EPBC Act put the protection of threatened species above the power of the states. The Morrison government's re-hash of Tony Abbott's failed attack on the integrity of the EPBC would put the foxes back in charge of the hen house".

"The Senate now remains the hope for species like the critically endangered Swift Parrot, Humpback Whales and Leadbeater's Possum. We call on all Senators to oppose this buck-passing bill, and for Australian to contact their Senate representatives to voice their disgust at this bill".

“Notorious, failing Regional Forest Agreements are a critical benchmark against which these changes to Australian environment laws can be measured. To see what ‘ecological sustainability’ looks like when the Commonwealth hands it to the states, witness the flattened and burnt native forests across Tasmania after logging. Identical evidence can be found in Victoria, New South Wales and Western Australia in the nation’s logged native forests. These vast native forests, once full of rare and endangered species of national significance have been left to the State governments to destroy,” Bob Brown Foundation Campaign Manager Jenny Weber said.

The Federal Government’s changes to the Environment Protection and Biodiversity Conservation Act is symbolic of its preferred approach to future environmental assessments. The EPBC Act controls threats and impacts to over 1800 Australian species of fauna and flora listed as either endangered, critically endangered or vulnerable, and our National and World Heritage sites. This amendment bill would transfer decision making and assessments to state governments.