Sharing time with Peter Hitchcock AM, who is a member of the expert delegation on behalf of Tasmania's forests, is the privilege of having an adviser with encyclopaedic knowledge of World Heritage sites in magnificent regions and the tall eucalyptus forests of Tasmania.  Peter has been attending World Heritage Committee since 2008 as a consultant to NGOs, as a Protected Area and World Heritage specialist. 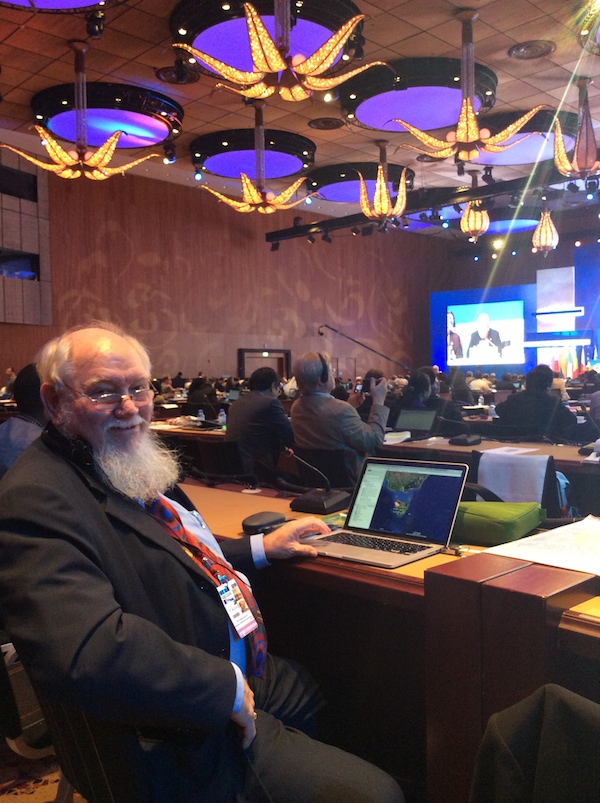 Peter first became involved in the the Tasmanian forest issue 28 years ago, when he was one of three commissioners. Peter served one year as a Commissioner on a Commonwealth Commission of Inquiry into the Lemonthyme and Southern Forests of Tasmania (The 'Helsham Inquiry'). The Inquiry was high profile and controversial. Peter was the author of a dissenting report and recommendations, most of which were adopted by the Commonwealth Government, including World Heritage nomination for the Tasmanian Forests.

Peter has been teaching me that this forum of the World Heritage Committee is just like a Parliament with rules and laws. He has also been teaching me about the significant role of IUCN and the work of this expert advisory team.

As one of the strongest advocates for the regional connectivity corridor (ecological) of tall eucalyptus forest/rainforest ecosystems that are threatened by the Australian Government's application, Peter has been highlighting the significance of this globally unique ecosystem. In Peter's expert opinion the tall eucalyptus forests in the TWWHA represent the world’s premier example of temperate tall eucalyptus forest. Truncation of these forests by the proposed de-listings would seriously degrade the Outstanding Universal Value of these magnificent forests, indeed the whole World Heritage Area.