Success: No woodchip port for Dover

The recent proposal for a new woodchip export facility in southern Tasmania rallied together many community members in opposition.  The night after 300 community members attended a public meeting and a number of motions opposing the facility were passed, the proponent withdrew the proposal.  In the words of the  woodchip dump proponent the proposal for Dover is ‘dead in the water’.

The public meeting was organised by Huon Valley Council after 1200 petitioners called for it.  The first and definitive motion of the night, moved by Dover resident Jen Hadaway, saw an overwhelming majority of ratepayers vote ‘No’ to the woodchip facility.  Subsequent motions by the minority of facility supporters present were voted down by the large majority.

In less than 24 hours after the proponent dumped the woodchip proposal, the Tasmanian government announced they have commissioned Evan Rolley, to assist the investigation of ‘strategic options’ for continuing to log, woodchip, and burn native forests in Southern Tasmania, keep the Southwood industrial forests destruction centre open on the banks of the Huon River and continue to prop up the controversial Borneo logging giant Ta Ann who is based at Southwood.  Export facility proponent Mr Neville-Smith told ABC news that the State Government assured him it would help his company find a new southern site for the woodchip export facility.

Who is Evan Rolley?  Former Managing Director at Forestry Tasmania, 1990 – 2006. Then Secretary of the Department of Premier and Cabinet for eleven months in 2007/08.  Director of Tasports for 6 years 2009-15.  More controversially still the Executive Director of Ta Ann Tasmania since 2012.  Recently appointed the chairperson for Private Forests Tasmania, in the past month.  He most recently served as VDL Farms’ chief executive 2011 – 17.  On the side he received $136 000 from Ta Ann when they purchased about 300 cases from his vineyard, while he was employed as their Executive Director.

All of this comes as SUStainable Timber Tasmania has released their logging and woodchipping plans for the next three years in Tasmania, including large areas of critically endangered Swift Parrot habitat, tracts of forest with giant eucalypts and habitat for rare and endangered species in southern Tasmania.

Our campaign team will continue to advocate for protection of native forests and endangered species habitat and an end to woodchipping, logging and burning of these precious ecosystems.

Huon Valley News: Taking another look at the options 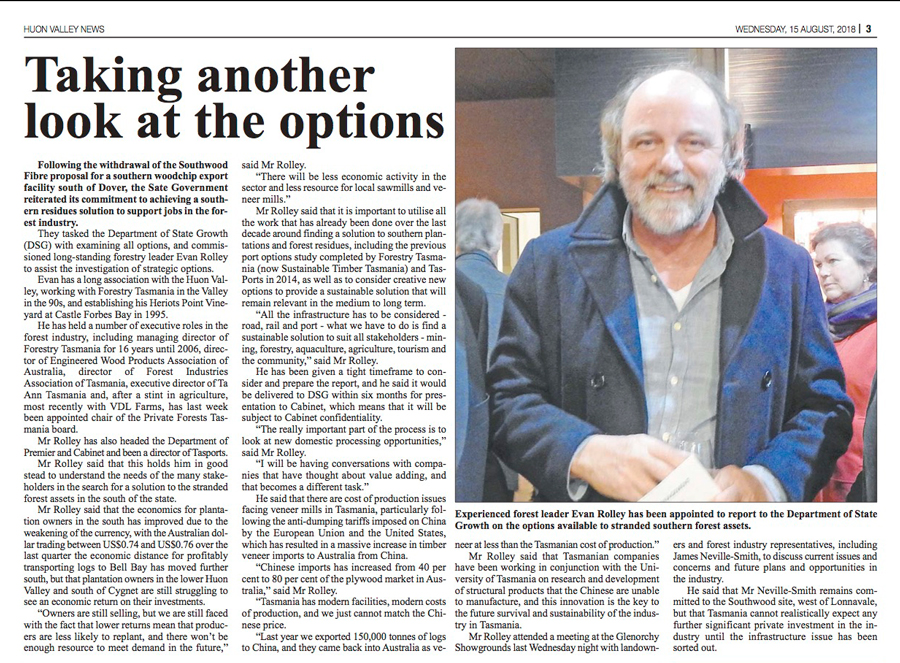 At a recent Private Forests Tasmania meeting , Adriana Taylor, still ‘commissioner’ of Huon Valley Council (until October), spoke about the Dover export woodchip facility, “I’m a member of PFT and have always been a strong supporter of the industry,”  complaining of having “suffered” through the Dover woodchip process, she went on to say “We should urge the Government to play its part. Why can’t the government find a southern port?” she mused.

The failure of the Dover woodchip dump is a victory for a community of 600 dedicated to preserving its lifestyle and job-rich hospitality industry, Bob Brown said tonight.

Mondays packed public meeting in Huonville was the proposal's death-knell: it put on show the huge public opposition.

This decision is more about pent-up public opinion than penned-up Tassal salmon. It flags a wider feeling in Tasmania that industrial logging is nowadays bad news for Tasmania's transformed economy.

The first and definitive motion of the night, moved by Dover resident Jen Hadaway, saw an overwhelming majority of ratepayers vote ‘No’ to the woodchip facility.

Subsequent motions by the minority of facility supporters present were voted down by the large majority.

The meeting was called under Council laws providing for such if a large enough petition is forwarded to council.

Bob Brown Foundation has hosted community meetings in Cygnet, Huonville, Hobart and on Bruny Island in the past three weeks to raise awareness about the proposed woodchip export facility at Dover.

A new short film has been produced by the Foundation to highlight the threats posed by this proposed industrial woodchip port to the tranquil Port Esperance, the small businesses in Southern Tasmania and the habitat for the critically endangered Swift Parrot.

At the Huonville, Hobart and Bruny Island meetings a motion was passed by the majority of attendees that they do not want a woodchip export facility in Dover.  More than 250 people attended the meetings.

“It’s important for people to understand why a woodchip export facility in Dover, or anywhere in southern Tasmania needs to be stopped.  On Bruny Island the proposed facility will be in line of sight and the ship route is proposed to go around Bruny Island.  Increased truck movements pose a threat to Hobart, Huonville and Cygnet communities.  Ongoing logging of native forests and loss of habitat for the critically endangered Swift Parrot are critical threats from a proposed woodchip export facility in Southern Tasmania,”  Bob Brown Foundation’s Campaign Manager Jenny Weber said.

"Thank you for hosting a public meeting about this very important issue. The proposed Woodchip Export Facility at Strathblane would be a major development in Tasmania’s Far South with detrimental impacts on the marine and forest environments, wildlife that depend on these environments, community members and visitors to Southern Tasmania.

Bob Brown Foundation hosted public meetings in Cygnet, Huonville, Hobart and on Bruny Island in June 2018 to raise awareness about the proposed woodchip export facility. More than 250 people attended the meetings. At the Huonville, Hobart and Bruny Island meetings a motion was passed in a majority, the attendees do not want a woodchip export facility in Dover. Particularly noteworthy, was the 115 people in Huonville Town Hall on the 19 June, that voted NO to this proposed development."