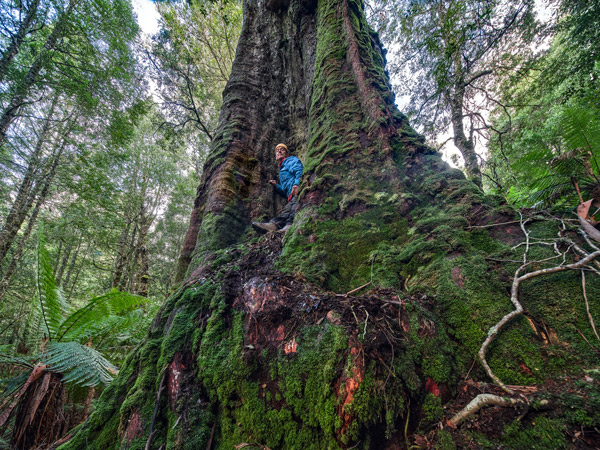 While carrying out an aerial occupation of the threatened Styx forests, citizens documented Eucalyptus regnans that are hundreds of years old and ancient rainforests inside the proposed logging area.

Tasmania’s Premier Gutwein did call off the immediate plans to close the Styx Valley of the Giants.  He added a broadside of criticism of the people and environment organisations who advocate for the forest protection and access to the Valley of the Giants is outrageous.

The Premier claims that broad-scale clearance of native forest ceased on public land more than a decade ago.

This photograph of clearing of native forest yesterday in Tasmania puts that claim to the lie. 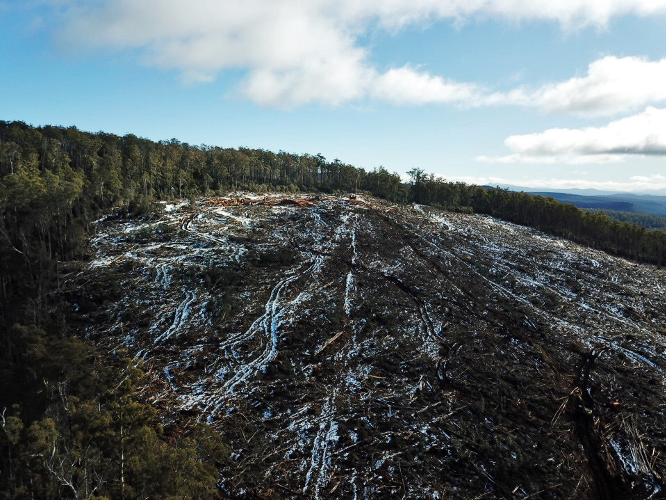 Nevertheless, the Premier boldly states that “Broadscale clearance and conversion of conversion of native forests on public land ceased more than a decade ago”.  This is demonstrably false.

Preservation of Tasmania’s intact native forests is critically urgent as they have irreplaceable values as critical carbon stores, habitat to rare and endangered wildlife and protections from increased bushfire intensity.

Tasmania’s Styx Valley is world-renowned as the Valley of the Giants. It is Tasmania’s premier tall forest showplace.  Premier Gutwein’s plan is to obliterate some of the world’s most majestic flowering plants, along with their wildlife - for woodchips for China and peeler logs for Malaysian logging corporations in Tasmania.

The planned steep cable clearfell logging of ‘coupe TN034G’ is made worse by government plans to lock the public out and close the road.

Premier Gutwein claims that “STT routinely work with local tourism operators prior to any harvesting operations ensuring minimal impact on regional businesses”.  No Derwent Valley tourism operators had been notified about any potential road closures, including those that have businesses that are directly affected by the proposed closures along Styx road.   Yet the Tourism Industry Council is riding with Premier Gutwein.

Sus Timber Tasmania has a ‘protocol’ that is not adhered too.  Though they are meant to notify stakeholders, the community and tourism operators have not been consulted about plans for their 2020 logging operations in the Derwent Valley.

Premier Gutwein claims that Sus Timber Tasmania advises it will ‘work proactively with neighbouring land managers to provide alternative access for the Big Tree Reserve’.  This has not happened before.  In 2016 the Styx road was closed so forests could be flattened; see image below of the forests after logging and incineration of the coupe.  Back then, the tourism operators were not informed. They turned up to locked gates with clients and were locked out of the World Heritage Area for months. 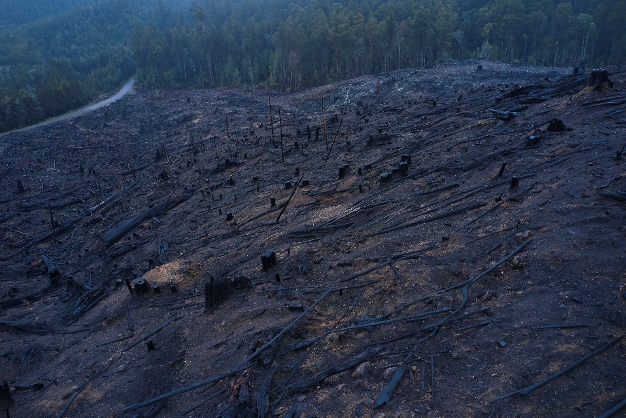 If Bob Brown Foundation had not set up our tree sit occupation in TN034G and shone the spotlight on STT’s plans to close the Styx road to log this magnificent forest, it would have been business as usual - favouring the logging industry over the tourism industry.  Premier Gutwein claims “......this is more important at the moment, given Tasmanian businesses are experiencing such uncertainty due to COVID-19.”  However, the relatively few jobs in native forest logging were going to be prioritised at the expense of the much more job-rich tourism industry.

Premier Gutwein claims that “STT advises that when Giant Trees occur in public production forests, they proactively identify and reserve them, ensuring they are protected.”  In the past twelve months, community environment groups have exposed one example of giant trees being logged, burnt and even left behind in the coupe because it was too big to remove.  Here it is in forests west of Judbury that were critical habitat for the critically endangered Swift Parrot.

Elsewhere in Tasmania, trees of massive volumes and heights are clearfelled every day in Tasmania. The arbitrary system set up for classification of ‘Giant Trees’ that is not only outdated, but was outdated when it came into effect decades ago. The tall and voluminous trees of the State are signifiers of habitat rich, important ecological global systems.

Premier Gutwein claims that logging of the Styx coupe TN034G, and more than 700 other native forests coupes across Tasmania is allowable due to being specifically set aside by both Houses of Tasmanian Parliament for producing wood for sawmillers and wood processors.  He fails to mention most of the forest is for woodchips for China and peeler logs for highly controversial Malaysian logging corporations in Tasmania. These forests also could be destined for forest furnaces overseas. 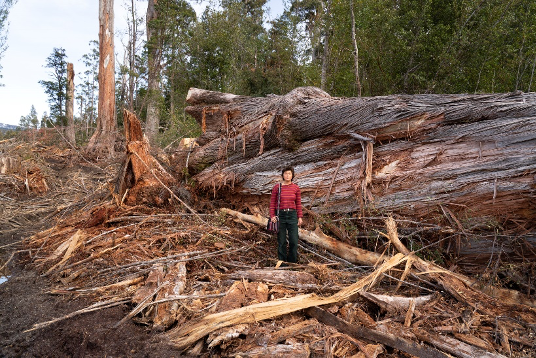 Premier Gutwein is sanctioning the ongoing logging of ancient forests, including this contentious forest that is located on Styx road.  Logging, if allowed to go ahead will flatten forests right to the road which gives access to the World Heritage listed Valley of the Giants.

New Zealand stopped the logging of its native forests 20 years ago.  There is no excuse for this ongoing Tasmanian slaughter Premier Gutwein.

While forest defenders were in the threatened Styx forest last weekend, hundreds of people emailed Premier Gutwein calling for the forests to be protected.
Here is Premier Gutwein's response: 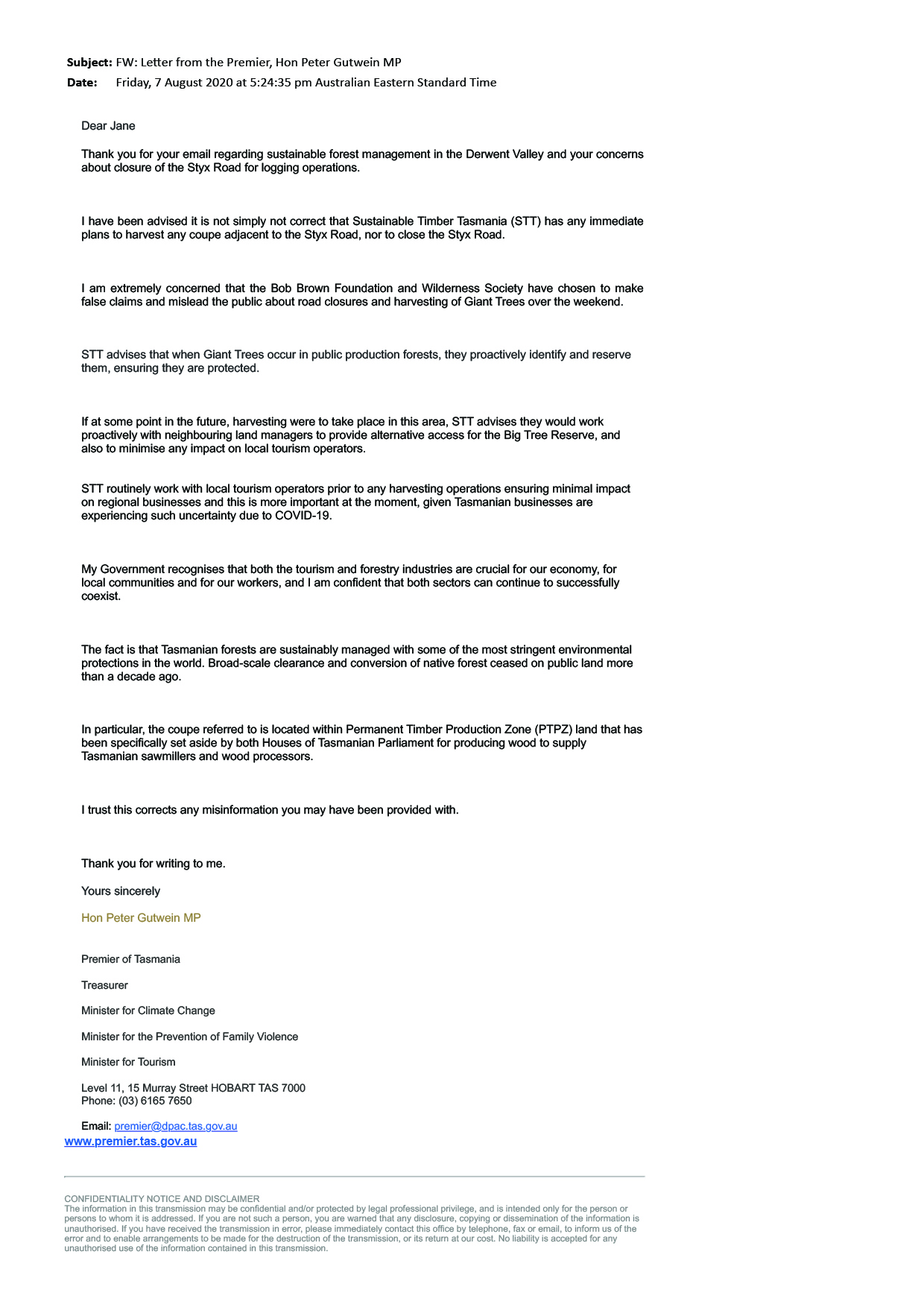