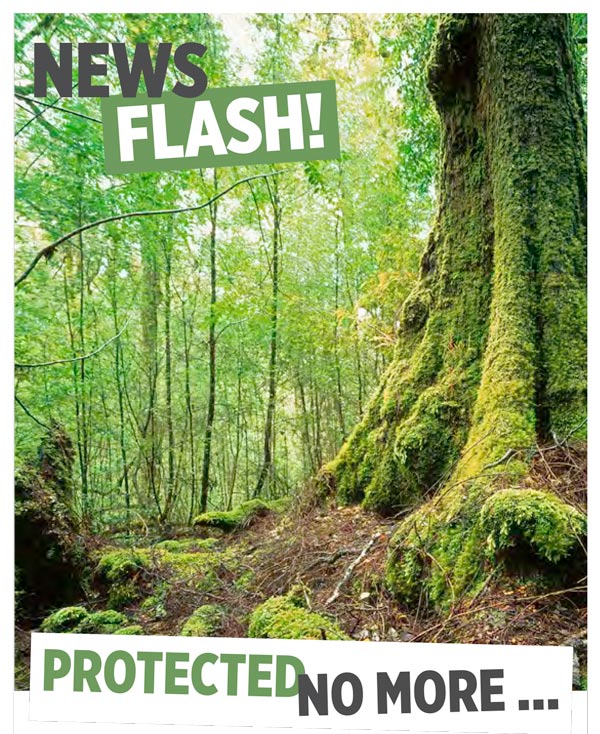 As the Legislative Council resumes consideration of the Hodgman government’s revocation of the Tasmanian Forests Agreement new leaflets (see attached) from Markets For Change and The Bob Brown Foundation are landing in letterboxes, sounding the alarm that existing reserves of many years’ standing will be opened to logging alongside abandonment of promised ‘peace deal’ reserves.

“One and a half million hectares of Tasmania that is currently off limits to logging will be opened to the chainsaws under Hodgman’s extreme new forestry legislation,” said Markets For Change CEO Peg Putt.

“This goes much further than simply scuttling the 400,000 hectares of new reserves promised under the Tasmanian Forest Agreement and also allows all Conservation Areas and Regional Reserves across Tasmania to be opened to logging for specialty timbers.”

“Many of these places were protected years ago under rigorous scientific provisions of previous forest agreements like the RFA, and going back as far as the 1980s. It’s a stealth attack on some very precious forests, with rainforest particularly targeted.”

“There is very little time to rein in this excessive proposal so we are urgently letterboxing households to let people know about how 30 years of forest protection is set to be undone at the same time that we lose promised new reserves,” said Campaign Manager for The Bob Brown Foundation Jenny Weber.

“Proposed ‘partial logging’ in reserves for specialty species is not environmentally sensitive, and there needs to be acknowledgement that there is another way for specialty timbers, including a long overdue wood bank and increased recycling.

This proposed logging regime will bring recreational users and commercial tourism operations into conflict with logging operations. Parks and Wildlife will be expected to manage the logging,” she continued.

“Modified clearfelling to be used in the 1.1 million hectares of reserves removes 25-70% of the canopy and often allows post-logging fires and insertion of permanent snig tracks, to be used every 20-30 years. Old growth trees that are also vital wildlife habitat, such as for nesting, are the target. New logging roads may be bulldozed,” Ms Weber concluded.