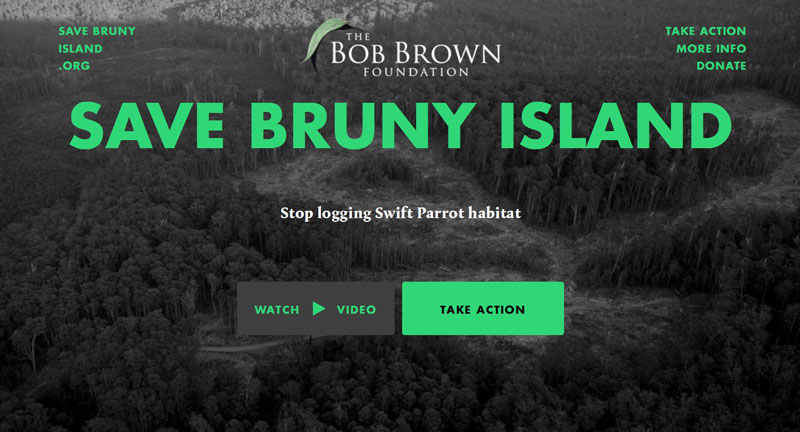 A new website SaveBrunyIsland.org, including a short film, was launched today by Bob Brown Foundation with a peaceful demonstration on the doorstep of Hobart’s Parliament House. Conservationists held placards of the Swift Parrot, with an image drawn by cartoonist First Dog on the Moon.

The new campaign is designed to mobilise members of the community to send emails to the Prime Minister and Tasmania’s Premier Hodgman, urging protection of all Swift Parrot habitat in secure reserves. The online email actions are also targeting customers of logging company Ta Ann, asking them to reject timber from logged Swift Parrot habitat.

‘Bruny Island’s logging moratorium is only a temporary reprieve, not secure protection for these forests or the Swift Parrot. The forests on Bruny Island need to be added to the South Bruny National Park,’ Jenny Weber said.
‘The International Union for the Conservation of Nature recommended that all places on public land that support Swift Parrots should be under secure conservation management. The Australian and Tasmanian Governments must act to prevent extinction of a critically endangered species and implement IUCNs recommendation,’ Jenny Weber said.

‘We look forward to gathering people from across Tasmania, Australia and around the world to take action for the Swift Parrot’s habitat protection. It’s the world’s fastest parrot that breeds only in Tasmania. If the world’s fastest parrot is to survive, it is critical that logging is permanently halted on Bruny Island and in all Swift Parrot breeding habitats in Tasmania,’ Jenny Weber said.