My name is Anthony Houston I’m a farmer from Tasmania.

This is a story about my granddaughter’s wish to save the Great Barrier Reef.

Three weeks ago, my six-year-old granddaughter Evie came up to me and said, “grandad I have asked my class if they could draw pictures of the Great Barrier Reef to give to you to take to Mr Adani”.

Well, this caught me by surprise so I said “does your mother know”. She said “no”.

I said does your teacher know and she said “yes”. Next time I saw her mother, Clare, I asked her whether she knew what Evie was doing, she said yes she did and she was happy with it.

So Evie gave me the drawings from her friends and I headed off from Hobart on the Stop Adani Convoy across to Melbourne then on up to Sydney.

My family including Evie and her three-year-old sister Mabel, all came to the Stop Adani rally in Sydney with me and met Bob Brown.

Bob sat down on the grass with them both and Evie explained to Bob what her friends had drawn and what each picture meant to her. 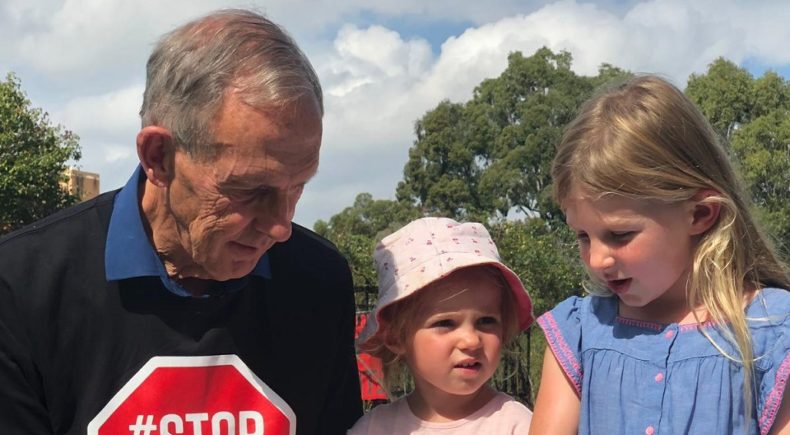 When she’d finished Bob asked Evie what she would like him to do, she said “Mr Brown could you take these drawings to Mr Adani and save the Great Barrier Reef and all the fish and the turtles and the koalas.”

Some people might say it’s not right exposing kids as young and Evie and Mabel to such a frightening thing as the destruction of the Great Barrier Reef, but Evie has done this off her own bat, she is not traumatised. In fact, it’s the opposite. She told me she knows the reef is in trouble because the water is too warm and we all have to try and help save it.

Evie and Mabel love coming to the rallies and Evie is very proud that she got on the SBS news the other night and I didn’t.

From a very proud grandad.