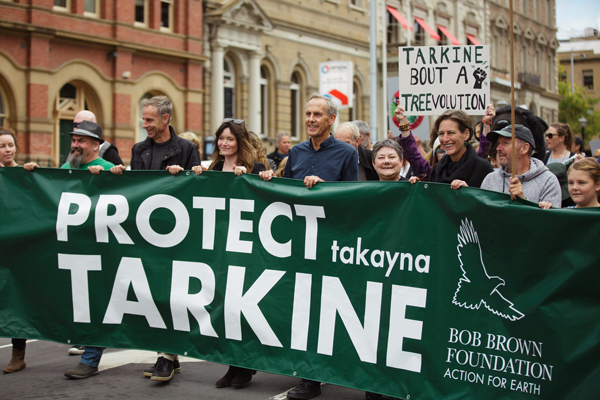 “Tasmania will be let down by Premier Hodgman and Labor leader Rebecca White’s commitments to continue to destroy takayna / Tarkine. They want to continue logging and mining rainforests and endangered species habitat and destroying the national heritage listed Aboriginal cultural landscape on its remote coastline by allowing off-road vehicles. It is an international shame that Tasmania’s unique and breathtaking takayna / Tarkine remains unprotected. This globally significant wild place is deserving of world heritage listing, National Park protection and should be returned to Aboriginal ownership. Tasmania’s north west economy will greatly benefit from this protection and protecting this wildlife-rich ancient landscape with the cleanest air in the world is a necessary action as we face climate change,” Jenny Weber, Bob Brown Foundation Campaign Manager said today. 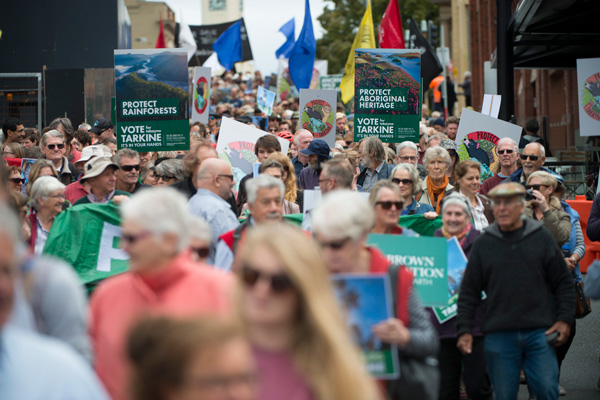 “On Monday next week, if Hodgman wins, the logging, mining and off-road vehicle invasion of the Tarkine will be racked up and the privatisation of all Tasmania’s National parks, from Cradle to Maria Island, will be truly ugly,” Bob Brown said today.

“The Tarkine needs to be protected,” Australian Actor, Essie Davis said when she spoke at today’s event.

“My people have lived and travelled within the landscape of takayna for thousands of generations. The evidence is there – in the many family / living places where we see the remains of feasts of the past; in the hut depressions; the walking tracks; markings made in rock by generations past.  I ask Will Hodgman, how much more will you take? Haven’t we lost enough? Enough is enough, we must keep takayna wild and free, protect her wildlife, her plant life and keep those damn off-road vehicle tracks on the Western Tasmanian Aboriginal Cultural Landscape closed,” Theresa Sainty, Tasmanian Aboriginal Centre. 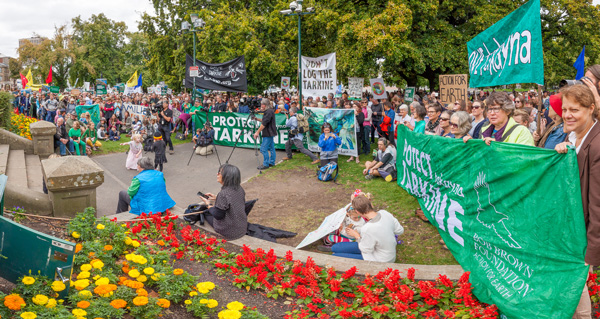 “Why do I bag government and forestry so much, I’m glad you asked,” Todd Walsh, The Crayfish Man said.  Todd Walsh is the world leading expert on the giant freshwater crayfish, the largest freshwater invertebrate in the world. The species lives only in northern Tasmania in a small number of rivers, including the Arthur River catchment in takayna / Tarkine and its habitat in takayna / Tarkine is imminently threatened  by logging.