Peter Hitchcock AM has died 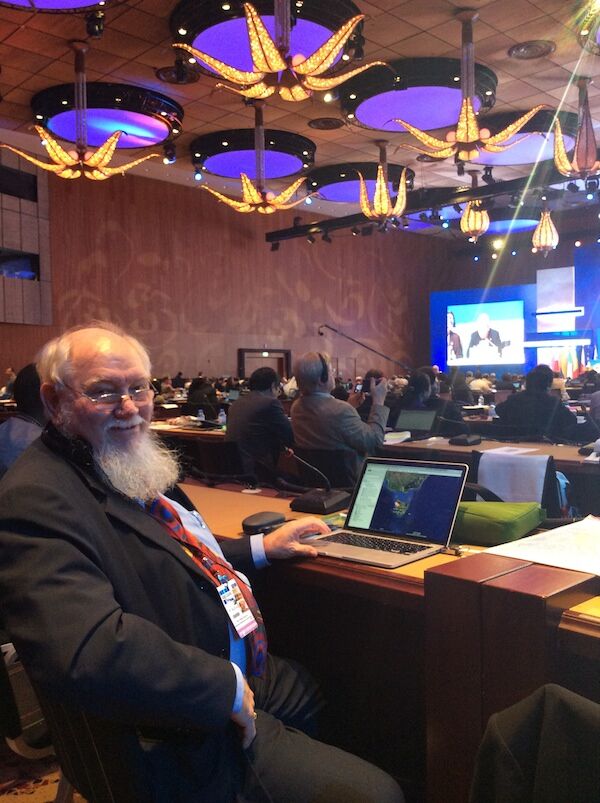 Peter Hitchcock, who repeatedly used his scientific background to win protection for threatened wild areas both in Australia and overseas, died in Cairns Hospital this morning, aged 75.

In the late 1980s, Hitchcock gave the federal government his dissenting report of the three-person federal Helsham Inquiry in which he advocated almost doubling the Tasmanian Wilderness World Heritage Area to include the Walls of Jerusalem, Denison River catchment, Vale of Rasselas and Exit Cave (near Dover). Prime Minister Bob Hawke adopted his minority report over the less coherent majority report which favoured not listing these places. ‘History has proved Peter right’, Bob Brown said in Hobart.

‘Peter Hitchcock was a courageous fount of environmental wisdom who was highly respected around the world including by other United Nations environment decision makers. He has an honoured role in giving great authority to the protection of Tasmania’s and the world’s wild and scenic heritage. He had global respect for his science and was called in to assess vital environmental ecosystems in South-East Asia and elsewhere on the road to protection for all times,’ Bob Brown said. ‘Peter advised the PNG government, including on protection of the Kokoda - Owen Stanley Ranges region.’

Peter was fundamental to the saving of northern New South Wales’ rainforests and eucalypts in the Gondwana Forest World Heritage Area. He was the first managing director of the Daintree Wet Tropics World Heritage Area in North Queensland.

Peter is survived by his wife Liana and five children.

The bushman who became a conservation legend

Peter Hitchcock was a bush boy from the Gloucester Valley in NSW who grew up to become an ‘ecological bushman’ and one of Australia’s greatest unsung conservationists.

It’s hard to believe that a man who ‘saved’ so many trees is so little known by the wider public. From the 1970s, he was a key member of expert teams in NSW, Victoria, Queensland and nationally responsible for protecting many of the national parks and World Heritage areas now enjoyed by millions of Australian and international visitors.

Peter was a fallen forester, and perhaps that was the source of his disappointment and upset at the ongoing mismanagement of Australia’s native forests.

He went to Forestry School in the 1960s at the Australian National University in Canberra. It was there that he was inspired by the vision of ending the chaos of forest destruction that Australia had witnessed since the 1800s – the ring-barking, cutting, clearing and burning of Australia’s primaeval forests, mainly for agriculture.

A new breed of professional foresters promised to put an end to all that, and Peter was in the vanguard.  The goal was to finally implement sustainable harvest levels in the wild native forests.

Peter understood ‘sustainability’ in its broadest sense.  He knew forests were more than the timber they produced.  Ahead of his time, he saw that Australian landscapes were globally important for a myriad of other environmental and biodiversity values.

Unfortunately, Peter discovered very quickly at his first posting to the Doyles River forestry sub-district in the Great Dividing Range behind Port Macquarie in NSW that those values were not going to be protected by the foresters.

He witnessed first-hand what he later called ‘liquidation logging’ – a ‘cut out and get out’ mentality that benefitted the sawmillers, but not future generations.

It didn’t take long for him to jump ship and start working for the NSW National Parks and Wildlife Service.  He was lucky.  The battle to save the rainforests of NSW started in the late 1970s, and Peter played a pivotal role, especially with his ecological knowledge and ability to map forests accurately using aerial photographs.  These were the days before satellite imagery and data.

Peter helped draw the boundaries for the rainforests that were protected in 1983 under then NSW Labor Premier Neville Wran.  He made sure he included much of the surrounding ‘tall eucalypt’ forests which he recognised were ecologically connected to the rainforests, and important in their own right.

Working together with his ‘green team’ within the NSW National Parks and Wildlife Service, those forests were subsequently nominated for World Heritage and inscribed on the World Heritage List in 1986.  They’re now known as the Gondwana Rainforests of Australia.

It was a masterstroke.  Hitchcock was appointed in May 1987 as one of three royal commissioners to the Federal Inquiry into the Lemonthyme and Southern Forests of Tasmania, known as the Helsham Inquiry.  The inquiry was widely recognised as a political disaster for conservation, but Peter produced a minority report which allowed Senator Richardson to successfully argue for the protection of large areas which otherwise would have been left open for logging.

It was also the formal beginning of more than 25 years campaigning to properly protect more of Tasmania’s tall eucalypt forests as World Heritage.  Peter was an official advisor to the Australia Government for the 2013 additions to the Tasmanian Wilderness World Heritage Area, which included more representative samples of the remaining oldest and largely undisturbed tall eucalypt forests.

Partly in recognition of his informed contribution to the resolution of the Tasmanian forestry dispute, in 1991 Peter was appointed as the first Executive Director of the new Wet Tropics Management Authority in Queensland.

After a traumatic political battle with the Queensland Government over the future of Australia’s tropical rainforests, Peter was the peace-maker.  The enduring widespread community and business support for the World Heritage protection of the Wet Tropics is one of his greatest legacies.

Peter always had a world view of conservation.  He became a respected assessor of the World Heritage values of natural sites for the IUCN.

I had the privilege of working with Peter recently on a book about his beloved ‘tall eucalypt’ forests. We never finished, but I will remember forever his single-minded dedication to the better recognition and protection of these globally important and unique Australian landscapes.

Peter is survived by his wife Liana, his sister Pauline, his brother David and his children Phillip, Jenny, Ellen, Joe and Jess.