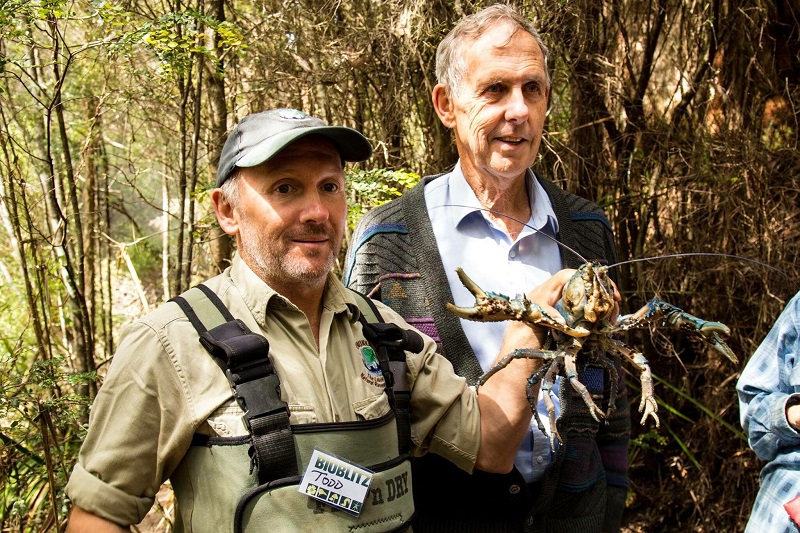 In Melbourne, this Big Weekend at the National Sustainable Living Festival (NSLF), noted Australian environmentalist, Bob Brown will present "Beyond the Green" as a keynote on Sunday, 11 February at 1:30pm in the Dome at Birrarung Marr.

Bob Brown Foundation (BBF) is partnering with the NSLF to bring the plight of Tasmania’s takayna/Tarkine wilderness to Melbourne.

BBF’s campaign activities to protect takayna/Tarkine are reaching a crescendo this month. Campaigners are camped in the beautiful Frankland River forests of the Tarkine, with climbers, tree-sits and banners to protest their logging.

“The Tarkine is drawing international attention. It warrants World Heritage listing. This is a growing national campaign to have Prime Minister Turnbull save it or, if not, the next Labor government,” Bob Brown said.

“Over the next three days, we will unleash our new 6 metres long Giant Freshwater Crayfish Snuff Puppet. Nicknamed ‘Asta’, the puppet represents the world’s largest freshwater invertebrate whose survival is threatened by logging in the Tarkine,” Emma Wasson, Melbourne-based campaigner for BBF said.

A new Virtual Reality Tarkine Experience will premiere with a 360-degree film about the Tarkine. Visitors will be able to experience the Tarkine’s rainforests and rivers on headsets at the festival.

"We intend on turning the white elephant metaphor into a blue lobster one when it comes to native rainforest logging in Tasmania's Tarkine. The Giant Freshwater Crayfish (Astacopsis gouldi) lives in the Tarkine’s rivers and is being pushed to the brink of extinction by native forest logging," Emma Wasson said.

"Australia’s and Tasmania's Liberal government and Labor opposition both support the logging of the Tarkine's rainforests, smashing them to pieces and selling them, unbelievably, as woodchips or as timber to Malaysian controversial logging and palm oil behemoth Ta Ann," Jenny Weber, Campaign Manager with BBF stated.

"Recent devastating logging scenes in Tasmania's ancient rainforest have galvanised us to ramp up our campaign even more in Melbourne for permanent protection in a World Heritage listed National Park and return to Aboriginal ownership," Jenny Weber said.

"Those who'd like to see the ancient rainforest we're campaigning to protect can ‘visit’ it using headsets in our 360-degree virtual reality film experience this weekend. They may also see Asta the Astacopsis gouldi puppet roving around one of Australia’s best environmental festivals," Emma Wasson said.