The Bob Brown Foundation is campaigning in Adelaide at the ALP National Conference for support for the 100km, $20 million Trans Tarkine Track, in north west Tasmania and on other environmental issues.

Polling commissioned by the Bob Brown Foundation in May 2018 revealed that 72% of Labor voters want the Tarkine protected as a National Park. 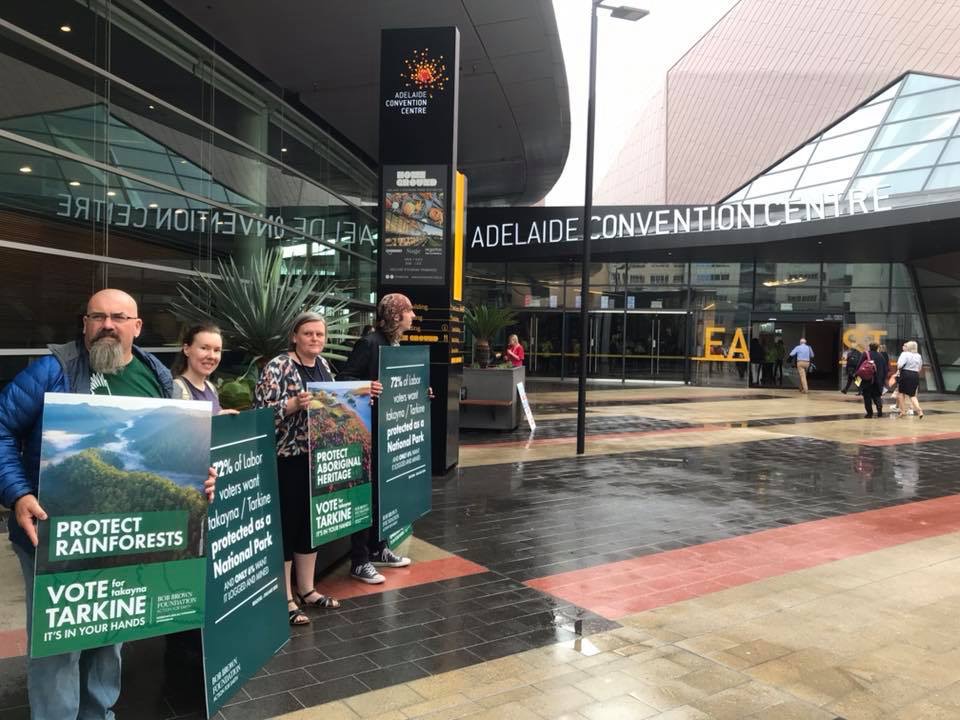 The Foundation is in Adelaide to ask delegates to the ALP National Conference to commit to protection of takayna / Tarkine, funding and building the Trans Tarkine Track and Stop Adani among other environmental issues. Foundation campaign manager Jenny Weber, Tarkine campaigner Scott Jordan and lobbyist for the Tarkine, Dan Cass, are in Adelaide for the conference.

Bob Brown said, “The Labor Party Conference is considering a rewrite of Australia’s environmental laws, which is useful but leadership also requires the party to take a stand and that means protect Tasmania’s takayna / Tarkine and no new coal mines.

“If Bill Shorten wins the next election then he will have a huge backlog of work to do to protect Australians natural wonders, because the Abbott-Turnbull-Morrison government had no environmental agenda.

“The Trans Tarkine Track is the first step to protecting the globally significant natural and cultural values of takayna / Tarkine.  The crucial step is granting secure protection for the Tarkine in a World Heritage listed National Park and returned to Aboriginal ownership.

“Adani’s insane coal mine is a carbon and political time bomb that a future PM Shorten will have to defuse as an urgent priority.

The Foundation held a screening for supporters last night in Adelaide of takayna, a documentary made by the outdoor clothing company Patagonia. Today and tomorrow the Foundation is holding a demonstration outside the ALP Conference. The Foundation is also lobbying inside the ALP National Conference, on the Tarkine and a range of other priority issues including the Adani coal mine.