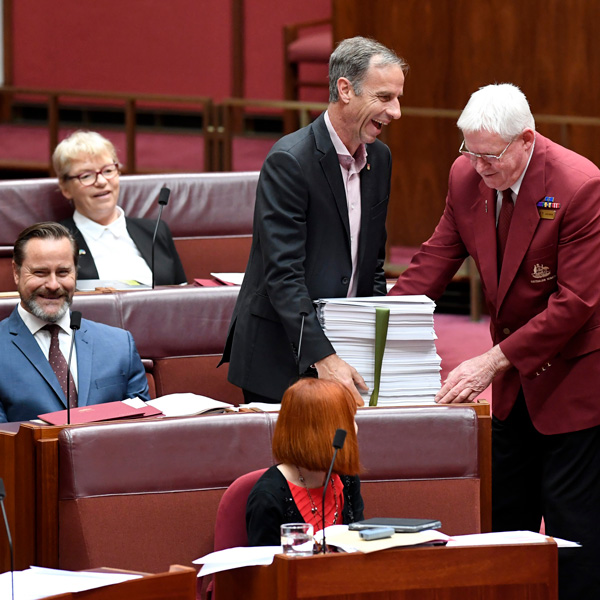 The campaign by Bob Brown Foundation and Patagonia for the ancient, wild and threatened takayna / Tarkine has made history in the past week. Today, Australian Greens Senators Peter Whish-Wilson and Nick McKim are tabling the largest petition ever presented to the Senate. The petition ‘Support World Heritage protection for takayna / Tarkine’ received over 270 000 signatures from around the world.

This petition was also tabled in the Tasmanian Parliament last week by Tasmanian Greens Leader Cassy O’Connor, being the largest ever petition tabled to Tasmania’s Parliament.

“A massive display of global concern for takayna, the Tarkine, the largest unprotected wilderness in southern Australia. This warrants an explicit response from both the Prime Minister and the Leader of the Opposition. We would welcome both on a summer break trip to the Tarkine. To see it is to want to protect it,” Bob Brown said.

“We presented the petition to Tasmanian Parliament last Tuesday night in a unique way by projecting a short film onto the front of Parliament House.  Five hundred people rallied on the lawns calling for protection of takayna / Tarkine,” Bob Brown Foundation’s Campaign Manager Jenny Weber said.

“There is an urgent need to have secure and permanent protection for takayna / Tarkine as a World Heritage listed National Park and returned to Aboriginal ownership.  Right now, citizens are on the frontline in Tarkine rainforests, threatened by logging, while the government is pushing to allow off-road vehicles over the sensitive Aboriginal heritage coast,” Jenny Weber said.

“With Patagonia joining the campaign to defend and protect this globally significant ancient, wild and threatened place, the push for protection of takayna / Tarkine has gone global.  It needs local, national and global advocates and our Australian and Tasmanian politicians have the power and privilege to deliver the necessary protection,” Jenny Weber said.