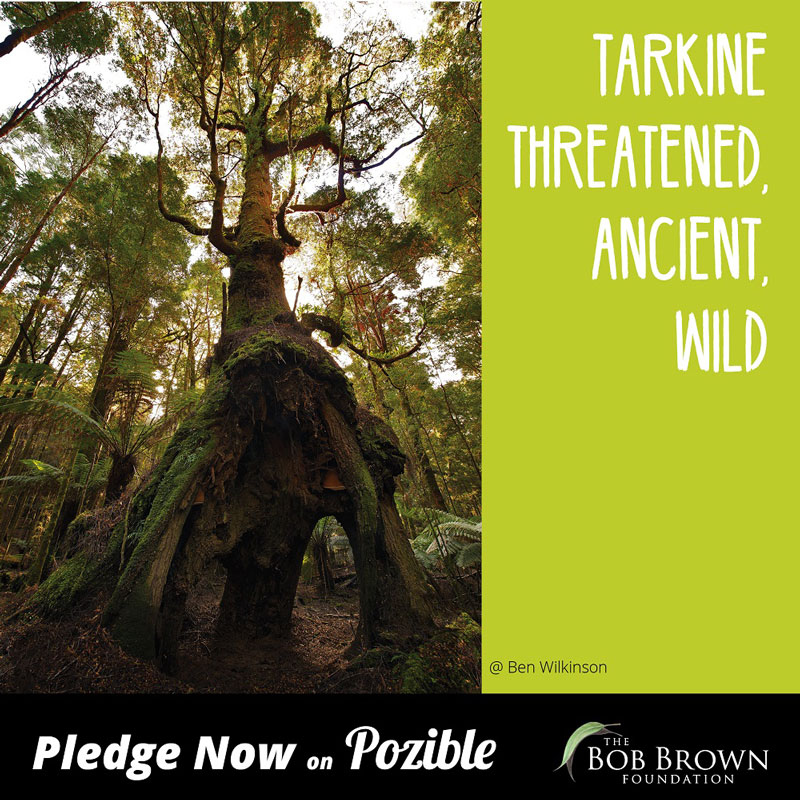 Tarkine in Motion is an environmental arts project by the Bob Brown Foundation. Over the Easter weekend, in March 2016, more than one hundred Australian artists will visit Tasmania’s Tarkine to explore and capture the place, contributing art, images and film to the Bob Brown Foundation’s campaign. Over four days, artists will immerse themselves in the landscape, supported by volunteers at seven base camps from the remote coastlines, to forests threatened by logging to rafting rivers with drones.

Bob Brown Foundation’s Campaign Manager Jenny Weber said, “This year Tarkine in Motion project is bigger in size and scale of the operation. From windswept coastlines on the coast to the largest temperate rainforests in Australia, we are excited that 120 artists will locate in several diverse locations through the Tarkine. Through the experience and expression of place by the artist, our Foundation can spread to the world the urgent plight of the Tarkine,” Jenny Weber said.

“The great body of work that will come from Tarkine in Motion will share with the people of our great cities what stands to be lost forever if we don't act to protect it. Artists are able to convey the Tarkine’s beauty, fragility and threats to a wider audience. Audiences will be exposed to the remarkable place through the remarkable effort of more than 100 artists in action,” Jenny Weber said.

“Fundraising for Tarkine in Motion is underway through the crowd-funding platform Pozible to fund the project. The Bob Brown Foundation is fundraising to support the artists and volunteers on location in the Tarkine. Costs include accommodation, transport, food and equipment for this huge undertaking. With over 1000 meals to prepare, thousands of kilometres to travel and 100 artists to support in the field, this event requires a huge amount of planning, organisation, logistics management,” Jenny Weber said.

Artists will contribute to our Federal Election campaign to promote protection of the Tarkine, short films, exhibitions in Tasmania and around Australia, and new books produced by the Foundation. Artists include photographers, painters, musicians, sculpture and multimedia artists from Tasmania, Victoria, NSW and Qld.

“The Tarkine cannot be taken for granted. The current policies of Liberal and Labor, state and federal, are to turn it into a logging and mining province. More than ninety percent is under mineral exploration licence and logging is proceeding in the eucalypt forests and rainforests of the Tarkine. The heritage coast is under pressure from rapid degradation by off-road vehicles ripping through middens and Aboriginal hut sites,” Bob Brown said.

“In the next decade, this wild landscape will either be ravaged by heavy industry or protected as a place of natural beauty, living culture and inspiration for all people. Our Foundation is making a new bid to turn the Tarkine’s urgent plight into a national and international campaign - for only people power will come to the rescue of the Tarkine,” Bob Brown said.

The Bob Brown Foundation is a not for profit, non-government, registered environmental organisation, taking action for Earth.

Tasmania’s takayna/Tarkine is in the remote northwest corner of the island state. The Australian Heritage Council found the Tarkine in north-west Tasmania of outstanding national heritage significance. This recommendation by the Australian Heritage Council was rejected by then Labor Federal Government. takayna/Tarkine covers 450 000 hectares in the north west of Tasmania. takayna/Tarkine has the world's cleanest air, the largest temperate rainforest in the southern hemisphere and a living Aboriginal history reaching back 40,000 years.  Habitat for endangered species, Australia’s largest freshwater crayfish, Astacopsis gouldi, Tasmania’s wedge-tailed eagle, Tasmanian Devil to name just a few. Blanketed in serene rainforests, with vast button grass plains and mountains sweeping down to meet the jagged coastline which shreds the wild Southern Ocean, this is an ancient, yet threatened landscape.