This morning we arrived at the World Heritage Committee meeting as 24 sites around the globe were being considered for inscription to the World Heritage list. Inscriptions today include the Decorated cave of Pont d'Arc, Ardeche in France, Okavango Delta in Botswana, and Great Himalayan National Park in India.

In the past few hours, sites in India, China, Republic of Korea have been inscribed.

Tasmania's forests agenda item is on the list for tomorrow. Unless something happens to see it come forward we are looking at a decision tomorrow.

With a deep knowledge of, and connection with, Tasmania's World Heritage Area, Lincoln Siliakus joins the expert delegation in Doha. Lincoln has covered many remote corners of the World Heritage Area in his boots, trekking through the wild ancient terrain.

Lincoln's experience here in the World Heritage Committee forum stretches back to 1985, when he attended for the first time as a member of a lobbying delegation on Tasmania's forests and tropical forests around Qld. 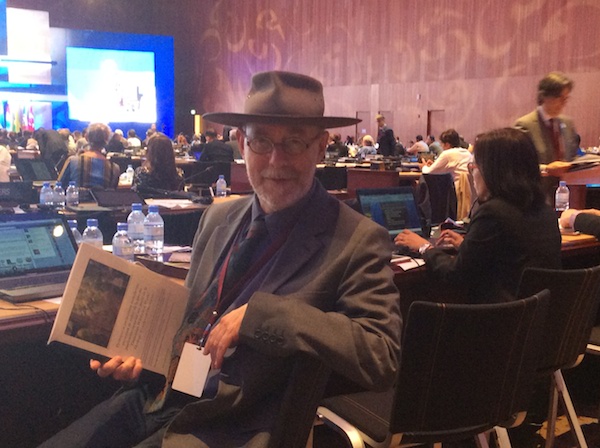 Lincoln, with Alec Marr, Christine Milne and Peter Hitchcock, have carried the baton for the globally significant site that is Tasmania's World Heritage Area in this forum for two decades.

Some of you may know Lincoln as the man who coordinated the legal campaign to save the Franklin River from damming. He represented blockaders and The Wilderness Society in the famous High Court case.

At the World Heritage forum level, he has not only lobbied for Tasmania.  Lincoln has also lobbied for Kakadu National Park, successfully fought the attack by the Howard Government to attempt to have the operational guidelines of the convention gutted, and lobbied UNESCO in Paris last year on behalf of Great Barrier Reef.

Lincoln is Tasmania's World Heritage Area steward in France. In his spare time he is a lawyer turned journalist, writing about wine tourism in France.

With a very kind and caring personality and a willingness to share his advice during this World Heritage forum with me, Lincoln has far reaching expertise in advocating for the unique, wild and remote forests of Tasmania's World Heritage Area. The forests are in very good hands.