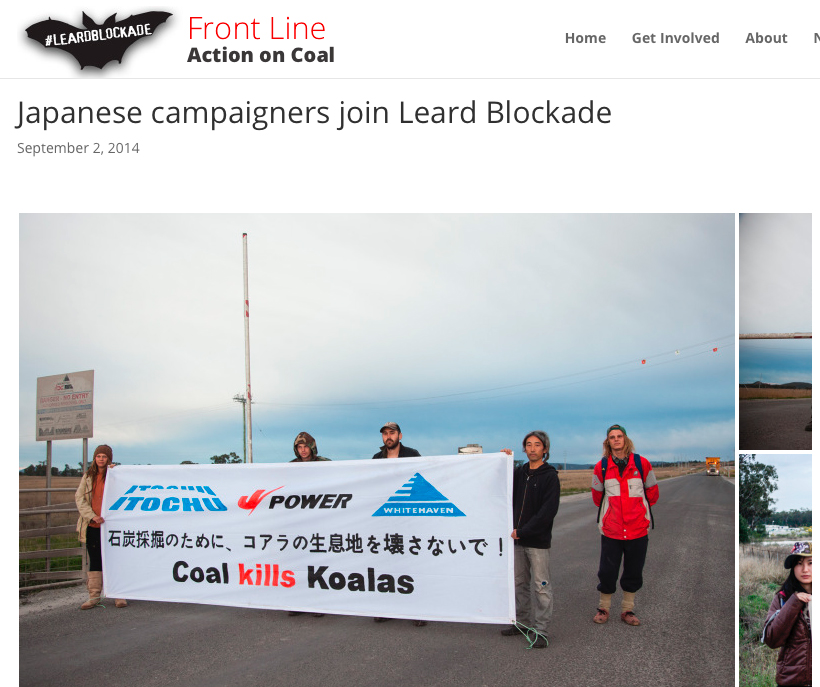 Japan Tropical Forest Action Network (JATAN) have travelled to Maules Creek to support a blockade of Idemitsu’s Boggabri Coal Haul road this morning. JATAN have joined the Leard Forest Alliance (LFA) calling for a halt to the destruction of the Leard State Forest. JATAN and the LFA are calling on a halt in the construction of the Maules Creek Project and for Japan Bank of International Cooperation (JBIC) to divest from Idemitsu’s Boggabri Coal mine.

Leard State Forest is the largest piece of remnant bushland left on the Liverpool Plains and contains some of the last remaining 0.1% of critically endangered box gum woodland left on the earth. The forest is home to 396 species of flora and fauna. This includes 28 threatened species, such as the koala, turquoise parrot and squirrel glider.

“We have travelled from Japan so we can see first hand, the destruction of Australian forest and farmland by our government’s bank” said Akira Harada, JATAN spokesperson

Both Idemitsu’s Boggabri coal and Whitehaven’s Maules creek project are clearing 1100ha of this critically endangered forest without adequate offsets. Japanese corporations, J Power and Itochu, are joint owners of the Maules Creek mine, holding 10% and 15% stakes.

JBIC is the financier of Idemitsu’s Boggabri Coal and by funding this destruction they are in direct opposition to their own policies. They must take into consideration impacts on land, water, air, as well as cultural heritage and landscape, and impacts that impacts may lead to trans-boundary and global problems. Through funding Idemitsu, JBIC are clearly breaking their policy to not invest in the destruction of critically endangered forests.

“Given the impacts on the forest, farms, sacred sites, in addition to the greater impact of climate change, JBIC must divest from Idemitsu” said Akira Harada, JATAN spokesperson

“The impacts of these mines will not only destroy the forest but cause everlasting damage on the fertility of the surrounding farmland” said Meret MacDonald, LFA spokesperson.