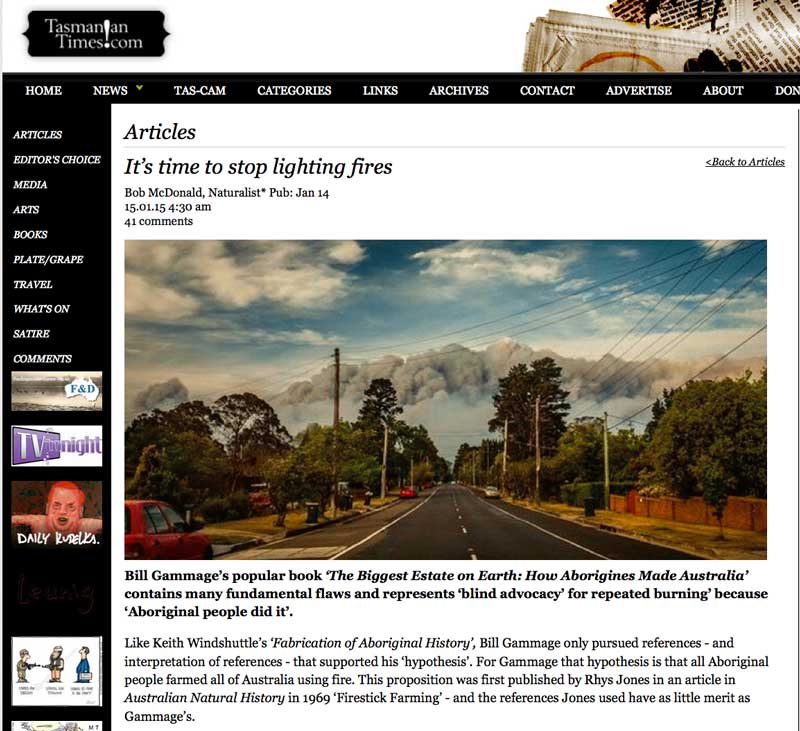 Bill Gammage’s popular book ‘The Biggest Estate on Earth: How Aborigines Made Australia’ contains many fundamental flaws and represents ‘blind advocacy’ for repeated burning’ because ‘Aboriginal people did it’.

Like Keith Windshuttle’s ‘Fabrication of Aboriginal History’, Bill Gammage only pursued references - and interpretation of references - that supported his ‘hypothesis’. For Gammage that hypothesis is that all Aboriginal people farmed all of Australia using fire. This proposition was first published by Rhys Jones in an article in Australian Natural History in 1969 ‘Firestick Farming’ - and the references Jones used have as little merit as Gammage’s.

Jones used a painting of Lesueur from 1802 to show landscape burning by Tasmanian Aboriginal people when the painting is clearly of smoke signals.  He quoted Peron observing the Derwent River ‘ablaze’ while Peron stated that ‘Tasmanians’ lit the fire to see them off. Bill Gammage now travels the country advocating frequent burning. He is not in any way qualified to do so and often does not look at the bush in these places before he advocates burning. He quotes no Aboriginal people or stories and ignores scientific evidence that cast doubt on his theories.

Read the full article on tasmaniantimes.com