Barking up the wrong tree on lerps?

The Editor,
The Australian Financial Review,

Dear Editor,
The Energy Resource Information Centre's Steve Wright says (Aug 25) that I am barking up the wrong tree on lerps.
While I have some admiration for lerps, I have never referred to the little critters. Wright's fabrication is another example of a coal seam gas proponent peddling myths.

'Facts v Fiction: busting CSG myths' (Australian Financial Review 18 Aug) states that "myths and unfounded claims are more often found of the side of the anti-coal seam gas activists" but offers no qualitative or quantitative evidence for the claim.

The report also has NSW Chief Scientist Margaret O'Kane giving a 'cautious green light to CSG mining in the Sydney Basin - saying it is likely has less impact than long wall coal mining'.

How about comparing the CSG impact with that of extracting renewable energy?

The Chief Scientist is comparing grey with black rather than white. While this will be pleasing for the CSG companies, it is not good science. 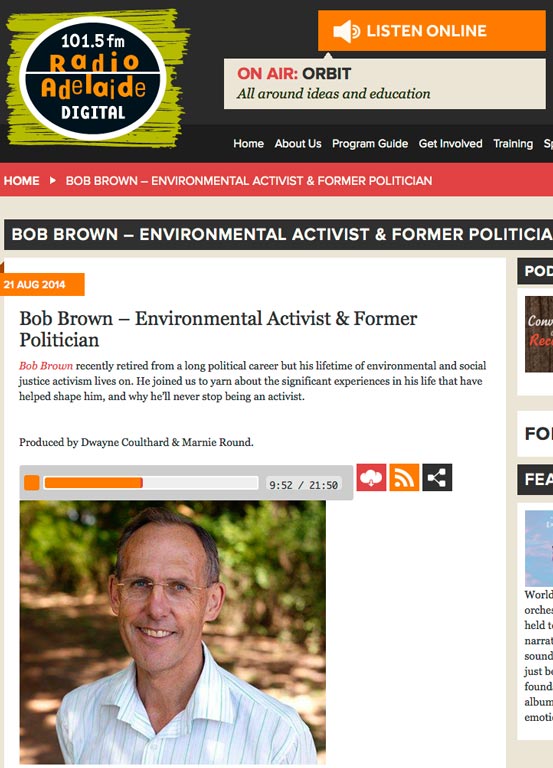 Bob Brown recently retired from a long political career but his lifetime of environmental and social justice activism lives on. He joined us to yarn about the significant experiences in his life that have helped shape him, and why he’ll never stop being an activist.

Produced by Dwayne Coulthard & Marnie Round.

Bob Brown: Reflections on politics, being green and being gay

"Former Greens leader Bob Brown is one of the most significant figures this country has known. He made his name saving pristine wilderness then formed a political party that changed the landscape forever."

He opens up to Ita Buttrose on Studio 10.

Bob interviewed by Natasha Mitchell on Radio National - "Bob Brown on optimism and how fear is used in the marketing arsenal. - Tuesday 5 August 2014"

Listen to the interview on the Radio National website.

In spearheading the latest Liberal attack on the environment movement, Federal member for Bass, Andrew Nikolic, made statements ranging from the hypocritical to the dishonest.

Women have always played a lead role in environment groups

Women ran the most crucial and contentious part of the campaign to save the Franklin River, the blockade.

From 1981 when Emma Gunn, Lilith Waud, Cathie Plowman and a band of others prepared for peaceful protest as the bulldozers were brought into the wilderness, this huge operation depended on their long-range planning, backed by national training for volunteers organised by people like Karen Alexander in Melbourne, Judy Lambert in Sydney, Jenny Whinam in Canberra and Louise Sladdin in Adelaide. The best account of arrangements on the Gordon River are in Alice Hungerford’s recent book ‘UpRiver’.

Former Liberal Treasurer, Peter Costello's diatribe against Tasmania in yesterday's Daily Telegraph is the latest pointer to the Liberal's ripping billions of dollars off Tasmania in coming years through an adjustment of GST payments. That will cost Tasmanian jobs dearly.

The Coalition Federal Government is hell-bent on reversing the 2013 World Heritage listing of the tallest flowering forests on Earth here in Tasmania.

Andrew Wilkie, like my maths mistress in first year, is 'disappointed' with me (Letters. 31.8.13). I will get over it.