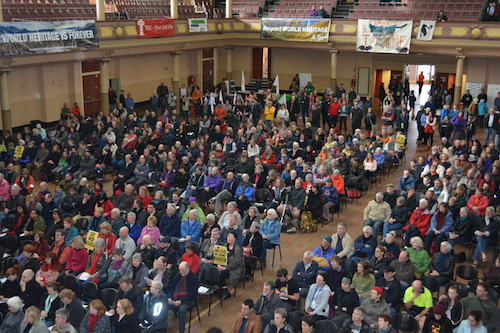 Bob Brown, stated, “Will Hodgman may jail me to take away my freedom in order to settle an argument he cannot otherwise defend. Paul Harriss may take my property. Eric Abetz may confiscate my pension. But like so many others here, and so many more beyond this City Hall, I will not be bullied or cowered by their brutal strategy.”

Ruth Langford, Tasmania's Aboriginal Centre's Secretary, stated, “This Bill aims to regulate protest activity conducted on a ‘business premises’ or ‘business access area’.  For Tasmanian Aboriginal people, our place of business is our Country.  When the mining and forestry machinery come to destroy our ‘place of business’ where is the legislation to protect us from potentially ‘invasive and destructive activity’?

It appears that this legislation will not provide for the Aboriginal Community’s interests, only the interest of elite private companies who gain their profit from our Country’s resources."

Jenny Weber, Campaign Manager, The Bob Brown Foundation stated, “Today is the beginning of what will be a significant campaign in Tasmania’s history to protect democracy.  Citizen’s stood united today, a coalition of twenty organisations united to oppose the repressive law and urge the Legislative Council to reject it outright.”