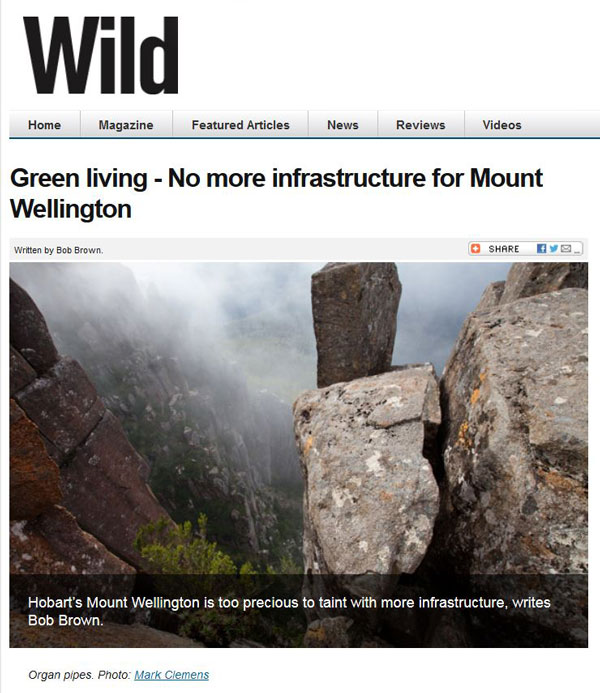 Mount Wellington dominates Hobart and is a binding place of interest for the southern capital's 215,000 people. Whether it is a fresh mantle of snow, the orange glow of bushfire smoke clouds over the summit at sunset, or a full moon setting behind its lofty spine, Wellington fascinates the populace below and draws more visitors than Port Arthur or Cradle Mountain.

The road to the top - the Pinnacle (1,271 metres) - was built as a make-work scheme during the depression of the 1930s and, these days, is sealed. On top, visitors are offered the choice of a weatherproof lookout over the city or a west-facing open-air one over the Tasmanian Wilderness World Heritage Area. Federation Peak was named so in 1901 because its spire could be seen far in the south-west from Mount Wellington and Tasmanians were the keenest backers of the new nation of Australia.

Also atop Mount Wellington is an ugly concrete 'television tower', its older steel companion and attendant sheds. They mar the scene and, from the city below, wreck the mountain's skyline integrity. Mercifully, summit clouds and snow scuds often obscure the towers and return that integrity.

Nowadays the signage to Mount Wellington includes the Aboriginal name Kunanyi, and we can only hope that there is a full reversion to this original, melodic appellation before long (the Duke of Wellington never saw the mountain named after him on the other side of the planet).

We don't have records of the first Aboriginal ascents, though Aboriginal Tasmanians sensibly walked around mountains and were bemused by the British yearning to climb them. Explorer George Bass, of Bass Strait renown, got to the top on Christmas Day 1798. Lady Jane Franklin is commonly said to have been the first woman to the Pinnacle in 1837, but she wasn't. A younger woman, pining for her fiancé who had drowned in the Derwent River, had struggled up the bush to look down on the scene of her distress two weeks earlier. But even she wasn't the first recorded female peak-bagger up there: that honour goes to Salome Pitt and her Aboriginal girlfriend 'Miss Storey' in 1810.

Other climbers include the famed Scottish botanist Robert Brown (no relation) in 1804, Charles Darwin (“a severe day's work”) in 1836 and Mark Twain (who described Mount Wellington as "the noble...brother of Etna") in 1895. By the end of the 19th century the mountain was recreation central for a growing horde of Hobartians.

In September I had the pleasure of launching Mark Clemens' book of photographs called The Mountain. Its foreword is by author Heather Rose, and Clemens adds his own essay to the beautiful collection of shots from all seasons. The book got me thinking again about the mountain's future.

Where recreation goes, ‘wreckreation’ follows. Hobart is once more split by plans for a cable car to the mountain's top. As if the road isn't enough. Perhaps the cable car could go up Hobart's tallest building, Wrest Point Casino, instead.

Many of us are keen to foster the status of the natural mountain. To cut a long story short, one of the much-reduced outcomes of the now defunct Tasmanian Forest Agreement is the reservation of Russell Ridge, which connects Mount Wellington to the Snowy Range and separates the Derwent and Huon river catchments.

The Russell Ridge conservation area is a long, thin 8,364-hectare ribbon connecting the 1,584,000 hectares of the Tasmanian Wilderness World Heritage Area (including the Snowy Range) with the 18,250 hectares of the Wellington Park. The three should be combined. Wellington Park should become a connected outlier of the TWWHA as is Mount Field National Park further north.

The road and telecommunications junk on top compromise the mountain's natural values but they have limited spacial impact. Mount Wellington's crowning plateau, along with the mountainside's network of largely hidden tracks, offers an accessible introduction to the wildness of Tasmania's south-west. This is an offer that some millions of people have taken up in years gone by and many millions more will enjoy in the years to come.

The difference between a cable car and world heritage status is that the latter would cost nothing and honour the mountain rather than exploit it. World Heritage Mount Wellington would also be an everyday reminder for Tasmania's capital and parliament that the magnificent wildness beyond is fundamental to the state's international reputation and attractiveness.

Meanwhile, Clemens' gem of a book is a handy reminder that Mount Wellington, with the Derwent River below, is essential to Hobart's deserved reputation as one of the world's most delightful little cities.