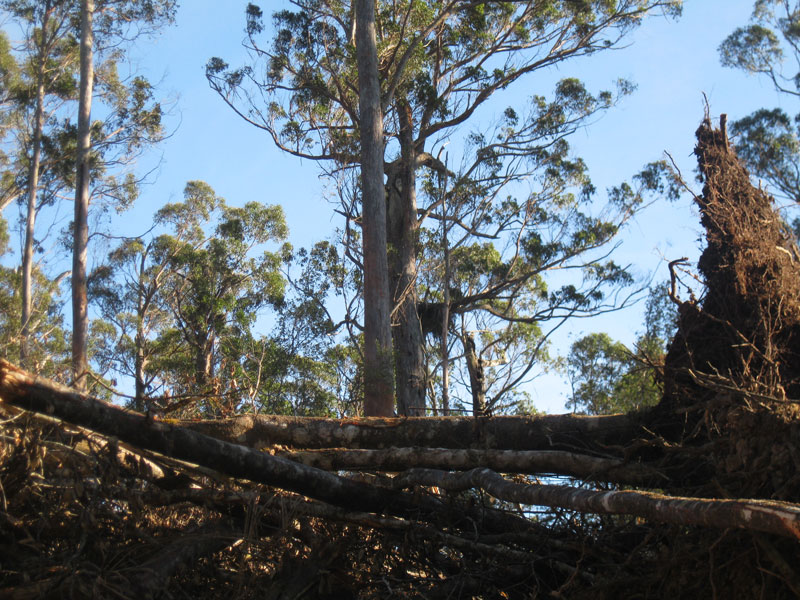 Forest logged in Lapoinya, north west Tasmania, for controversial Sarawak timber company Ta Ann and bravely opposed by the local community has just become even more controversial with revelations of a wedge-tailed eagle nest located by loggers while they destroyed the habitat.

Lapoinya logged forest has a wedge-tailed eagle nest, only located after bulldozers were within 20 metres of the nest. Footage and images taken by the community members show how close the logging came to the endangered species’ nest site.

Bob Brown Foundation are calling for urgent reform to protect endangered species in Tasmania’s forests and calls on Minister Gutwein to explain if logging would have proceeded if the eagle nest had been identified in Lapoinya forest.

Bob Brown Foundation campaign manager Jenny Weber said, ‘Forestry Tasmania has failed on endangered species for too long, they didn’t receive FSC certification due to a number of factors including failure to identify the potential presence of rare, threatened and endangered species and their habitats and failure to adequately avoid adverse impacts on the species. Ending logging in endangered species habitat is what is required. Urgent policy reform is required that prevents Forestry Tasmania’s freedom to destroy habitat of species that are on the brink of extinction.’

Logging laws in Tasmania state that a minimum of 10 hectares must be left around an eagle’s nest. Forestry Tasmania claims with their industry propaganda to have a ‘eagle-eye’ over the forests they plan to log.

‘Forestry Tasmania’s ‘Eagle Eye’ was obviously closed in Lapoinya, as it has been on too many occasions in the past across Tasmania. There have been repeated controversies in Tasmania with clearfell logging operations destroying eagle nests and causing failure of nesting because of logging near nests. These failures are inexcusable and Forestry Tasmania’s caretaker role of endangered species habitat is a farce,’ Jenny Weber said.

‘Forestry Tasmania’s planned burn of this logged area adds insult to injury. Our Foundation calls for this burn to be abandoned,’ Jenny Weber said.

Bob Brown has issued a High Court challenge to the Hodgman Government’s protest laws after his arrest for peacefully protesting the clearfell logging in the Lapoinya forest in January.