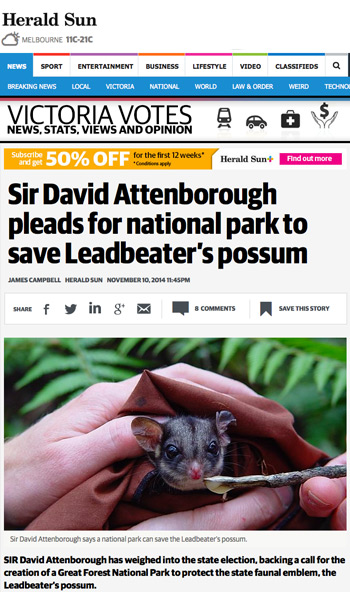 SIR David Attenborough has weighed into the state election, backing a call for the creation of a Great Forest National Park to protect the state faunal emblem, the Leadbeater’s possum.

The environmentalist’s intervention comes as a survey found 89 per cent of Victorians support the creation of a new national park in the Yarra Ranges and Central Highlands. 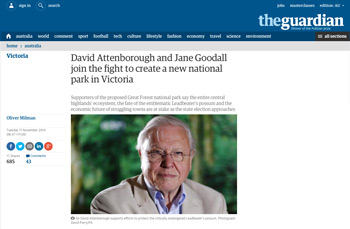 Sir David Attenborough and Dr Jane Goodall have made an unusual intervention into Australian state politics by calling for a new national park to be created in Victoria to save the endangered Leadbeater’s possum.

Attenborough, who is visiting Australia, has thrown his support behind the establishment of the Great Forest national park, which would encompass much of the central highlands area of Victoria.

“The maintenance of an intact ecological system is the only way to ensure the continued existence of biodiversity, safeguard water supplies and provide spiritual nourishment for ourselves and future generations,” the naturalist and wildlife documentary maker said.

“It is for these reasons, and for the survival of the critically endangered Leadbeater’s possum, that I support the creation of the Great Forest national park for Victoria.”

Goodall, famous for her work with primates, said the national park would help secure the future of a threatened ecosystem.

“If we act now, we will be ensuring the forest can continue to provide services that support us - clean water, fresh air and storage of carbon,” she said. “If we fail now, what future will we have chosen for our grandchildren and their grandchildren?” 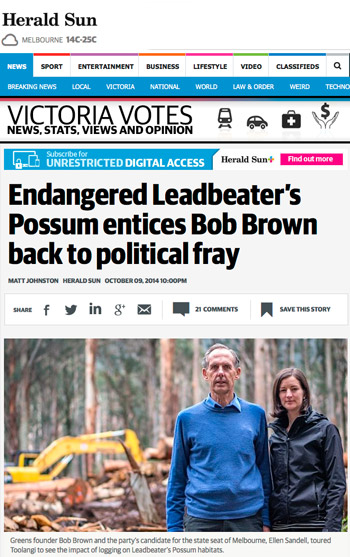 THE tiny possum that is Victoria’s endangered faunal emblem has enticed Bob Brown to re-enter the political fray ahead of the state election.

The former national Greens leader is heading to Melbourne armed with a Galaxy poll showing most Victorians support a national park in the Yarra Ranges east of Melbourne, which Dr Brown says would help protect the Leadbeater’s possum.

The survey of 503 people found a national park was supported by 64 per cent of respondents, and was particularly popular among young voters and women.

Environment and forestry groups have clashed recently over the possum’s habitat, and the Napthine Government recently released a plan to try to protect the marsupial’s slender population.