Festival of Voices concert promotes the plight of Tasmania’s Tarkine 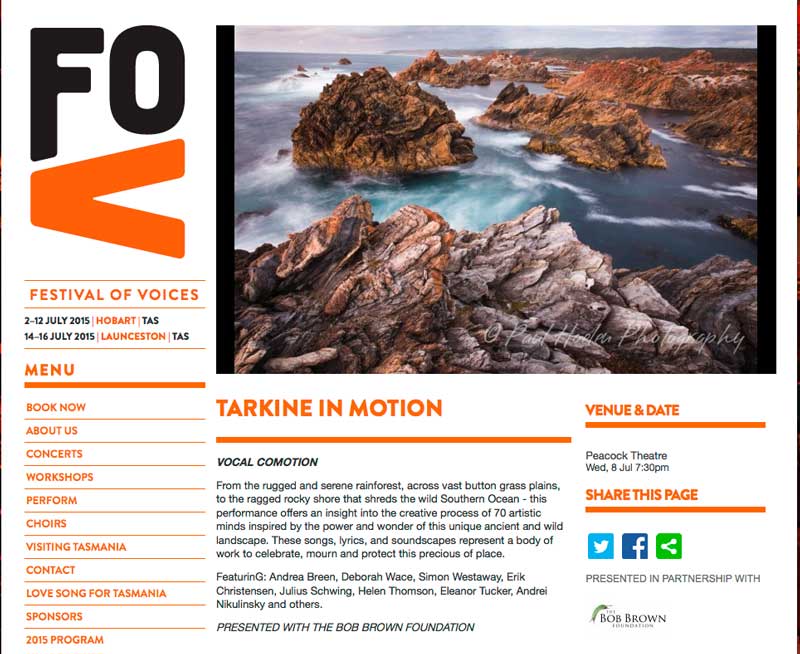 Tarkine Commotion, a once only show for Tasmania’s Festival of Voices, is a collaboration of singers, musicians, photographers and videographers from The Bob Brown Foundation’s Tarkine in Motion collaborative environmental art project.

This Wednesday 8 July at the Peacock Theatre, twenty four performers will showcase their collaborative production of nineteen new original compositions for Tarkine Commotion.

The BBF Campaign Manager Jenny Weber said, ‘Our Tarkine in Motion initiative aims to expose the globally significant natural and cultural heritage that is threatened in the Tarkine through many mediums including concerts and exhibitions. This Festival of Voices concert will offer the audience a unique opportunity to hear sounds direct from the place, inspired lyrics written and music composed in the place, expressed with the voices of many, it will be a portrait of one of the last great wild places on the planet, Tasmania’s Tarkine.’

Environmentalist and former Australian Greens Leader Bob Brown believes that Tarkine in Motion is the perfect medium to showcase this remote, rugged and spectacular region to the rest of Australia.

Creative Development Director Deborah Wace stated, ‘This performance offers an insight into the creative process of 70 artists inspired by the power and wonder of this unique ancient and wild landscape. The songs in our concert, Tarkine Commotion, represent a body of work to celebrate, mourn and protect this precious place.’

Sydney Actor and NSW Australia Day ambassador Simon Westaway will be one of the performers in Tarkine Commotion. Westaway joined the Tarkine in Motion project in April, stating “The success of Tarkine in Motion reveals that eco-tourism with the attraction of artists and likeminded people has potential for economic benefit for localised regions like the Tarkine and the state of Tasmania, rather than depending on crashing business engines like mining and forestry.”

Tarkine in Motion was held in early April 2015, 70 artists spent 72 hours in the remote Tarkine in North West Tasmania, capturing the wild and scenic beauty of this threatened landscape. Tarkine Commotion is the second event to be produced from the project, after a very successful photographic exhibition was held in May in Sydney as part of the Head On Photo Festival.