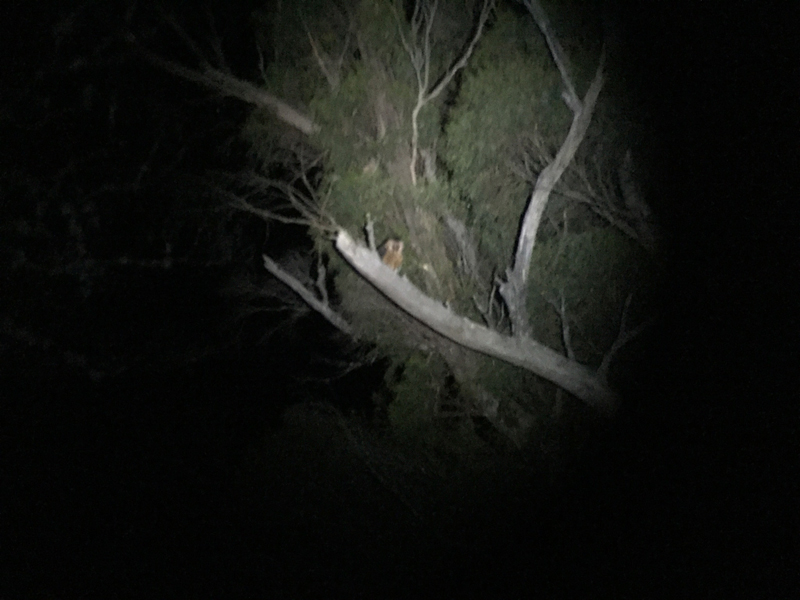 A remarkably good image given it was taken at night, on a phone camera, through binoculars. Photo: Frank Bird

Citizens and scientists at the Tarkine BioBlitz have detected an endangered masked owl near logging coupes Forestry Tasmania wants to log in February 2017. The Bob Brown Foundation is calling for protection of the Frankland River forests where the masked owl was recorded.

‘Members of our BioBlitz were awestruck when seeing an endangered masked owl in the threatened forests while surveying at night,’ Biodiversity expert and survey leader, Frank Bird said.

‘Protecting endangered species habitat in the Tarkine is urgent, there is an immediate threat to nesting habitat near where this owl was recorded. The survey site east of the Frankland River is some of the best masked owl habitat in the far north-west of Tasmania,’ BioBlitz organiser Nick Fitzgerald said.

‘The Tasmanian masked owl is listed as endangered due to habitat loss, it is the largest barn owl in Australia and only 500 breeding pairs remain. This majestic bird requires large hollow bearing trees, and its survival is dependent on preservation of mature forest habitat,’ Biodiversity expert and survey leader, Frank Bird said.

‘Recent road building for logging in these forests is encroaching on 6000 hectares of pristine forest in the headwaters of the Frankland River. The planned logging would be another ecological disaster for these vast tracts of forests,’ Bob Brown Foundation’s campaigner Jenny Weber said.