Developing the Tarkine’s Future – Why minding is better than mining

Save the Tarkine and the Bob Brown Foundation are pleased with the positive reception at the forum Developing the Tarkine’s Future – Why minding is better than mining yesterday in Wynyard.

Speakers included Adam Thompson and Ashley Murray from the Tasmanian Aboriginal Centre, economist Richard Dennis from The Australia Institute, Bob Brown from the Bob Brown Foundation, and Scott Jordan from Save the Tarkine. 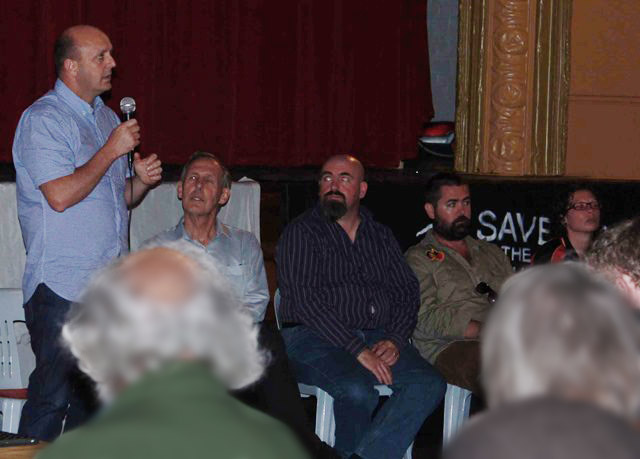 Mr Dennis spoke about the need for Tasmania to engage with it’s real economic opportunities going forward, and not tie itself to subsidy dependant native forest logging and mining industries. Mr Dennis pointed out that around 1% of Tasmanians are employed in native forest logging, and less in mining, compared to 20% of Tasmanians employed in tourism and hospitality. Mr Dennis went on to say that even if Tasmania doubled the number of jobs in the declining native forest logging and mining jobs, they would still be a tiny proportion of the Tasmanian workforce and would not change Tasmania’s high unemployment, and that you can’t address big, modern economic challenges by continued subsidising of tiny, old economy industries.

Mr Jordan discussed the economic mythology that had been built around proposed mines in the Tarkine.

“We have seen the real jobs growth happening in tourism in the Tarkine right now, but it is being hampered by a blind commitment by governments to pro-mining policy that ignores the trajectory of ore prices”, said Mr Jordan.

“Iron ore prices are $40 a tonne below the prices needed for Shree’s Minerals’ failed Nelson Bay River mine or Venture’s Riley Creek or Livingstone mines to be viable, and if you apply current tin, tungsten, iron and copper prices to the Venture Minerals’ business case, then investors can expect a return on investment below the rate you would receive from a guaranteed term deposit at your local bank. Investors are walking away from these projects because they just don’t stack up”.

Bob Brown spoke of the appeal of the Tarkine. 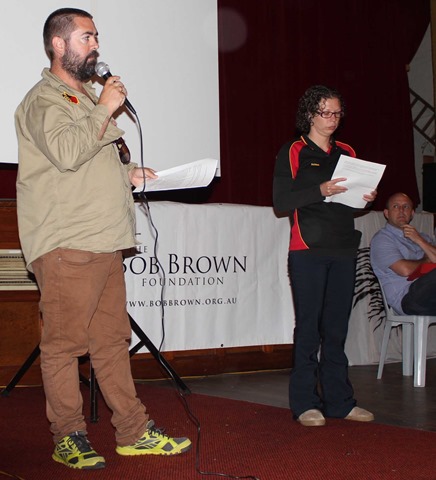 The Tasmanian Aboriginal Centre’s Adam Thompson spoke of the value of tarkanya (Tarkine) to Aboriginal people, and their hopes to see it protected and returned to Aboriginal ownership and management.

“It has been recognised that Aboriginal tourism opportunities exist and although commercial tourism has never been high on our agenda in the past, we see it as an opportunity that can contribute to our goal of being economically independent from government. We also see tourism as a way to generate the income necessary to fund our land management and heritage monitoring and protection activities”, said Mr Thompson.

Save the Tarkine and Bob Brown Foundation acknowledge that the meeting took place on Aboriginal land, and pay respect to the palawa people, and to the Elders past and present.