Words and Photos By Isabelle Chigros-Fraser 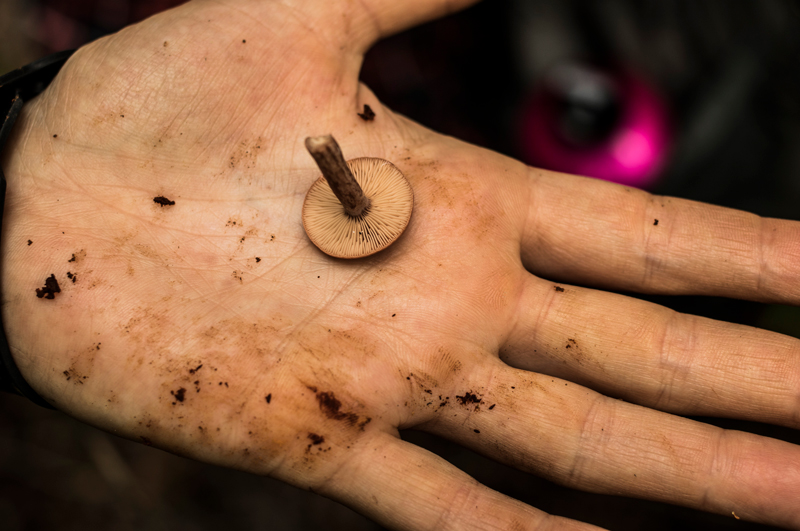 The area of the Tarkine in which Julie and I are camped is due to be logged this year. I wake up early enough to hear the twitching of nocturnal life about us. It is warm in my sleeping bag, and the air is cold and fresh out. I lay listening. The sardine cans that we left out the night before rattle. Julie opens her tent flap to see an endangered Tiger Quoll disappear into the forest.

I met Julie two days prior when she kindly picked me up from Hobart Airport to drive me up here into the North West of Tasmania to see some of the most beautiful forest on earth before it is logged. She is an environmental activist, at one point titled “professional protester” although she was never paid, who has spent much of her youth blockading at Wattle, Northcliffe 7, Beverly, and at the Olympic Dam uranium mines.

I really thought I could make a difference then, she says, but when you watch a place you love being bulldozed… her voice trails off. 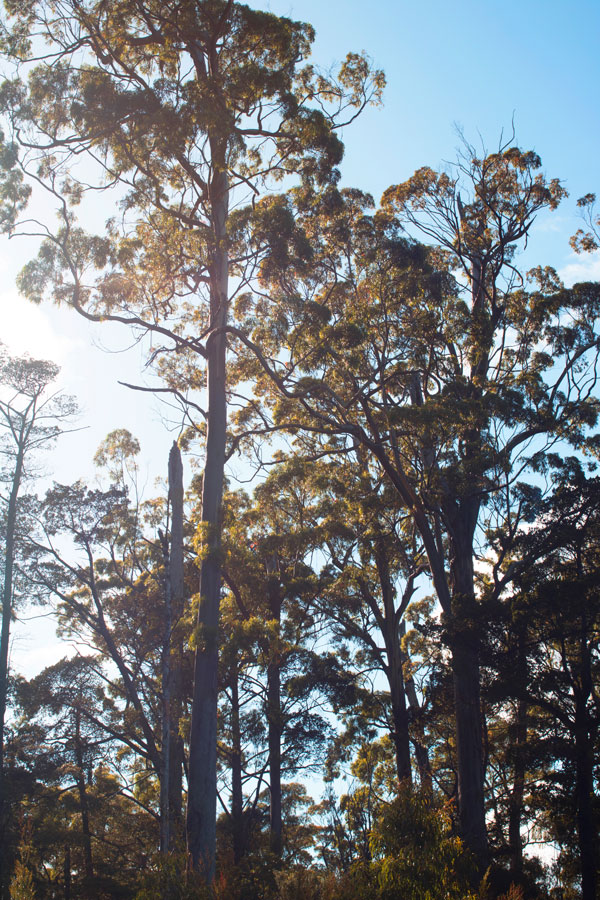 We get out of our tents. Julie has the kettle on, ready for a morning coffee. We look around at the forest, leaves bent low with night-moisture, the tree-tops stretching into the sky far above the dense undergrowth.

And this is only “the seen”. There is so much in this forest that remains unseen: the communication of the trees through their roots and through the fine webs of fungus beneath the soil, the dark dens of Tasmanian Devils and Tiger Quolls.

Julie is trained in botany. She looks about while the kettle heats up.

How old are these trees? I ask
I can’t say exactly, because I have never seen Nitida trees this big. But they could be around three-hundred years old. This hasn’t been touched since before European settlement. See that one with the holes in it?
She points to a giant tree that twists up into the morning light. It has holes all the way up it.
That is being eaten by something, she says, Could be fungi. Most of these gums are in their final stages of life. When they die, this will revert back to rainforest. It almost has already.
How much virgin forest is there left in the world?
Hardly any.
And they are just going to crush it?
Yep.
She looks around.
Most of these trees are dead. They won’t even make any money out of it, she adds.
She doesn’t sound at all surprised. In fact, her voice is resigned. It has the hard tone that one’s voice has when one is in grief.

Here is rare virgin forest, home to thousands of forms of life, including the critically endangered Tiger Quoll. It is a rainforest growing out of quartzite (something, Julie tells me, that many experts have thought impossible). It has not been surveyed thoroughly by scientists, so there are probably many other things in here that no-one knows about, and Forestry Tasmania are coming in to knock it down with, it seems, the high chance of no profit. 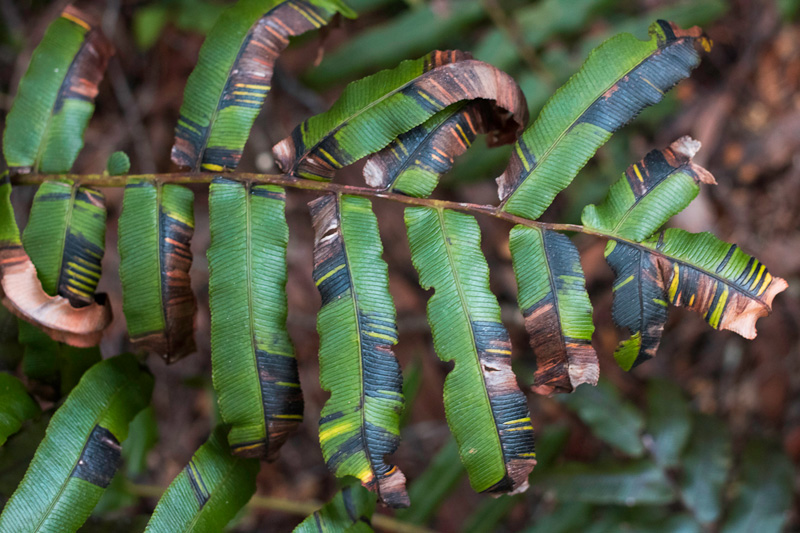 Why do they do it if there will be no profit? I ask someone a few days later.
Just so it looks like they are doing something, I guess. It’s more political. A lot of jobs are at stake.

It rains on and off that day. During a break in the rain, Julie and I go for a walk. We turn off a side road and see the beginnings of a logging operation. It is a tree grave-yard. The wood lies dead and grey and lifeless on the ground. It has been compressed by some heavy machinery after being logged. It feels dead compared with the forest we are camped in, which is filled with movement and sound. Here, all is silence.

I think about the loggers and their jobs. Growing up poor in a rural area, I have some understanding of the challenges these people face. I understand the insecurities of poverty and the culture of fear that can accompany it. There simply aren’t that many jobs out here in the North West of Tasmania. It is not like these people have a smorgasbord of jobs to choose from, and many of them love their homes. They want to feed their families.They have a connection to place. But with Forestry Tasmania running at a loss, and only so much forest to log, at some point things will have to change. At some point, jobs, in this sector at least, will be lost.

This is a multi-faceted disaster–and make no mistake, this is truly a disaster–that has come about because of weaknesses in our democratic systems and a lack of foresight and management. And one must always have compassion for those caught up in the thick of it if the problem is to be truly understood.

But then there is the larger issue of the value of these forests, not only in a time of climate change, but as virgin forests, there is so much we can learn from places like this: relatively untouched places. These forests are of great value globally, not only locally, yet only a small portion of locals get to decide its fate. It is the height of insanity to log these places when so few of them remain in the world, and when we know so little about them. We will, no doubt, have to start the process of regenerating forests all around the world at some point. This has already begun in some places.

And what of the non-human lives that inhabit these forests? This is home for some species that are barely hanging on. What does it mean for us to wipe out an entire species? How do we understand this kind of loss?

On the way back to camp, I hear a bird calling, and I walk into the thick undergrowth in the hope of seeing it. I slip a little on the moss underneath. Just as I am out of sight, a police car drives past. It has come from the direction of our camp. 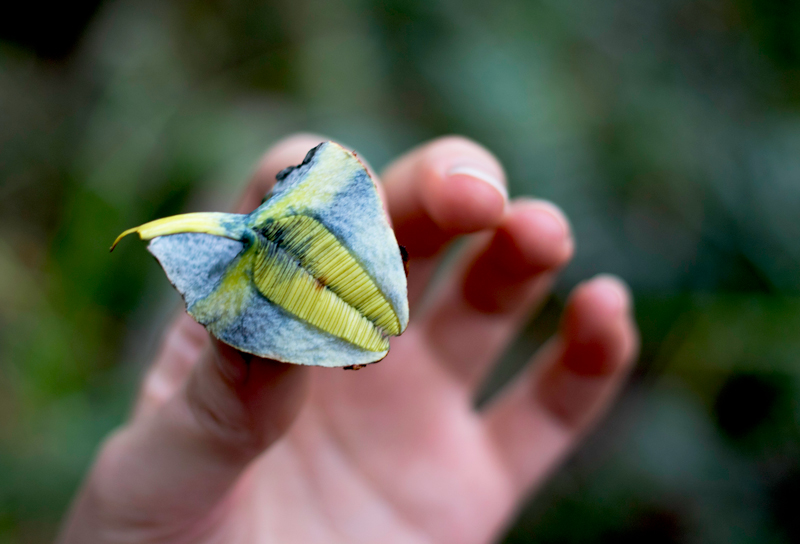 I head back to camp and notice that the zip of my tent is open and jammed. I made sure to close the tent before I left because of the rain. I can only assume that the police have searched my tent.

Protesting here in Tasmania is illegal. You can get more prison time for protesting peacefully than you can for assaulting another human being. I look inside the tent. Is my wallet in a slightly different position? Was my ID sticking out like that when I left? I ask myself.

In a “democracy" where a citizen cannot protest peacefully, what does that citizen have other than a vote three times a decade? Where is the space for one’s voice?

Where is the democracy?