Richard Griggs, Tasmanian Director of Civil Liberties Australia, stated, "Mandatory imprisonment for people who gather on public land to protest is deeply problematic in a democracy like ours.

Jenny Weber, The Bob Brown Foundation Campaign Manager, stated, "Our united stand in this unique coalition is to oppose these anti-democratic laws. The laws will impose mandatory fines and imprison citizens for exercising their right to peaceful assembly and freedom of speech. We are urging Legislative Councillors to reject this harsh legislation."

Adam Gregory, Tasmanian Co-Convenor for Australian Lawyers for Human Rights, stated: "The bill violates international human rights contained in the International Covenants on 'Civil and Political Rights' and 'Economic, Social and Cultural Rights', both of which Australia has ratified. In particular, the bill is inconsistent with our right to expression, assembly and association. The permitted restrictions of these rights under the Covenants do not apply to this bill in its current form."

Nick McKim MP, Greens justice spokesperson, stated "The government has massively overreached with this legislation, and constitutionally it is on shaky ground. People can end up in prison simply for gathering in a public place and expressing an opinion."

"It is a disgraceful bill, and it's now up to the Upper House to protect one of the most fundamental freedoms in our democracy," Mr McKim said.

Charlie Sherwin, Environment Tasmania's CEO, stated, "Good governments listen to people and respond to them. Instead, by crushing free speech with this bill, Tasmania’s Government is foolishly shooting every messenger."

Phil Harrington, Climate Action Hobart spokesperson said: "We live in a time in which governments have vacated the field of responsible leadership on climate policy, amongst so many other areas.  Therefore it falls to the people to exercise leadership instead.  The Tasmanian Government's attempt to deny the people’s voice – by suppressing the right to protest – is an act of vandalism against democracy itself”. 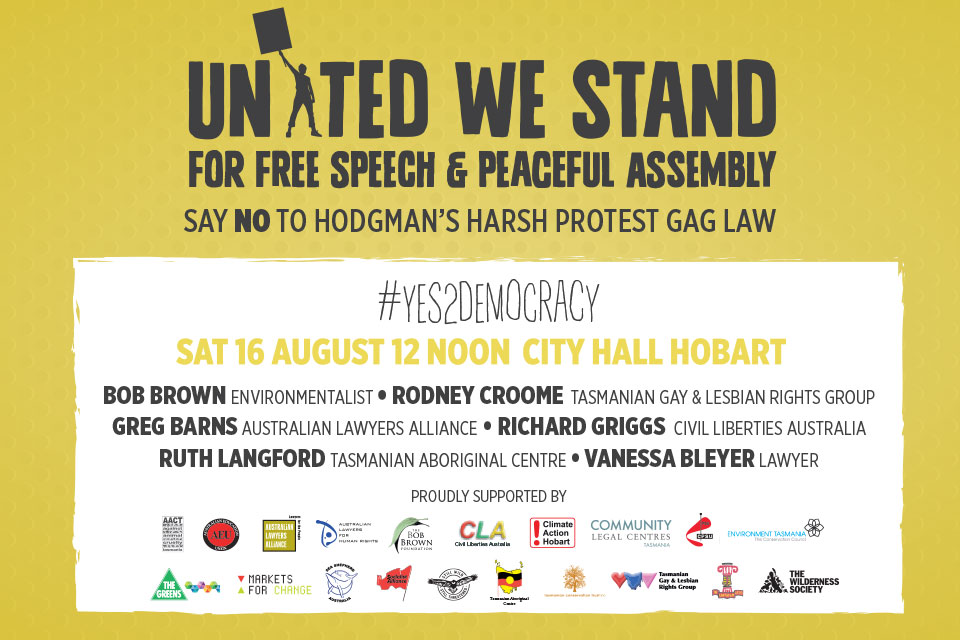