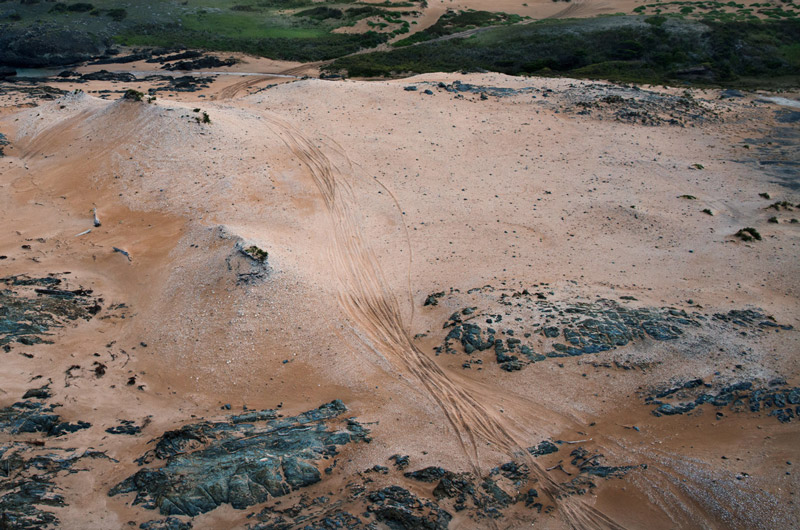 4WD tracks on takayna/Tarkine coast documented during the past twelve months when a court injunction was in place to prevent access to these cultural significant areas. Photo: Chris Crerar

"Today's decision by the Federal Court that 4WD tracks along the takayna/Tarkine coast damage Aboriginal cultural values of the area is a welcome relief for the Tasmanian Aboriginal community, and indeed all Australians who want to see these cultural treasures protected", the Foundation’s Jenny Weber said.

"Preventing off-road vehicles accessing the Western Tasmania Aboriginal Cultural Landscape, part of the National Heritage listing, will need policing by the State and Federal Governments. Even with an injunction in place there has been illegal use of these tracks and ongoing damage to Aboriginal heritage values."

"The State Government has a responsibility to ensure the closure of these tracks is not ignored by lawless hoons, and must increase resources for National Parks rangers to bolster their tireless efforts to protect the values of the area."

"We thank the Tasmanian Aboriginal Centre for taking this action with the Environmental Defenders Office in the Federal Court. Today's decision is proof that standing up in the face of adversity and Government sanctioned vandalism of cultural and natural heritage is important."

Our Foundation is campaigning for takayna/Tarkine to be protected as a National Park and World Heritage Area, to be returned to the Tasmanian Aboriginal people. The Tarkine is one of the world's last great wild places, currently under pressure from logging, mining and off-road vehicle use.