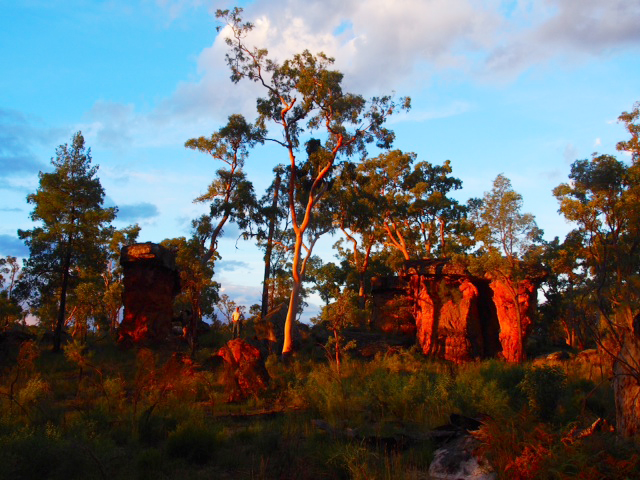 Carnarvon Gorge is the centrepiece of one of Queensland's most spectacular national parks. As the park camping area was shut in May, there was no option but to stay at one of the privatised  venues we stayed just one night. The day walking up the gorge was one of visual and photographic delights including this classic scene of the  native palms and sandstone cliffs reflected in on of the pools of Carnarvon Creek.

There were hundreds of people at the accommodation hubs but a dozen, at most, walked the 10 kilometres easy track to the Big Bend in the gorge. There are short side-tracks to the Amphitheatre (perhaps it ought to be called the Globe as it is a cylindrical canyon entered via a ladder and narrow slit), Wards Canyon (wherein grows the world's biggest fern), Aboriginal art galleries defaced here and there by Caucasian graffiti, and narrow side canyons.

Although, the night before, we were camped just 10 kilometres away as the crow flies - on the Moffatt Tops - this rugged country required a 300 kilometres drive south to the town of Injune and then back north along the Mitchell Highway to get to the gorge.

While most visitors miss the gorge's core walk, fewer still get too see the other wonders of this eroding sandstone plateau including its majestic Marlong Arch, crassly named but noble pillar called Lots Wife (more graffiti), and Cathedral Rock (ditto). Fortunately the vandalism seems to have stopped with national park status.

Paul and I went north to visit Bush Heritage Australia's 65,000 hectare Carnarvon Station which is in the crescent of the 300,000 hectare national park. BHA is doing a great job restoring the expansive native grassland meadows and billabongs, and helping protect more of the Bidjara people's sites from introduced weeds and animals.

By sheerest good luck, we were there at the right time to join a big throng on nearby Mt Tabor Station, for the launch of Bidjara station manager Keelen Mailman's autobiography (The Power of Bones, published by Allen & Unwin).

This launch was held in on of the most spellbinding place in Australia, the so-called Lost City. Here the blood-red sandstone has eroded and become a Bidjara spiritual mecca. The Lost City, pictured, has painted overhangs, red-coiffed chambers, soaring pillars, arches, grottos and fantastic outcrops. It is pervaded with an ancient human presence. It is a Bidjara, national and international treasure.

Tourism is being mooted for the Lost City. Let's hope, like at Uluru, the parking, accommodation and victualling is put some kilometres away and that, as in any Europeans' cathedral, the Bidjara people's reverence for the place remains supreme for the centuries to come.

Originally published in Wild Magazine, May 2014