Call to improve efforts to save Swift Parrot from extinction

More can and should be done in Tasmania to try and ensure the survival of the Swift Parrot whose plight is being highlighted on National Threatened Species Day by the Bob Brown Foundation, Markets For Change, and the Environmental Defenders Office. 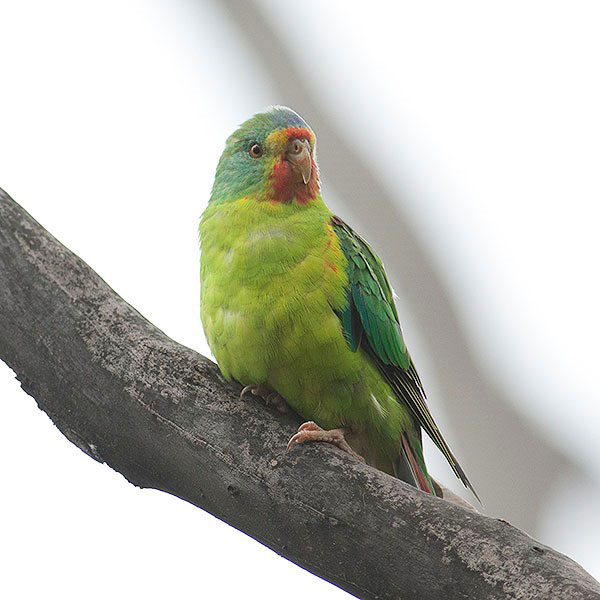 “First and foremost the continued destruction of the Swift Parrot’s breeding habitat must cease,” said Jenny Weber for the Bob Brown Foundation.

“Forestry Tasmania has continued to schedule logging in the birds’ breeding habitat in the southern forests on the Tasmanian mainland, making only a limited effort with its temporary logging moratorium on Bruny Island.”

“Logging must end permanently in Swift Parrot breeding habitat, which comprises blue gums with nesting hollows together with foraging trees that they rely on for food.”

“When the Forest Stewardship Council found a major non-conformance with their standards in the way that Swift Parrot and other endangered species are dealt with in logging it was a key reason that FSC certification was not granted. This has yet to be satisfactorily rectified,” Ms Weber concluded.

“Recent destruction of nesting trees inside a reserve by illegal firewood cutters has also put the spotlight on the illegal, unlicenced and unregulated firewood trade, which must be hauled into line,” said Peg Putt, CEO of Markets For Change.

“Dry east coast firewood can come at the cost of species survival, something householders need to be careful about.”

“We need Tasmania to put in place some regulation of the firewood trade that is capable of preventing destruction of vital habitat and ensure that such destruction is not profitable,’ Ms Putt concluded.

“Despite its critically endangered listing, a revised Recovery Plan for the Swift Parrot has yet to be finalised. This must be a top priority to ensure more effective management of the threats,” said Jess Feehely of the Environmental Defenders Office.

“Strong, targeted action is needed by both the State and Federal Governments and to prevent extinction of the species,” Ms Feehely concluded.