The Age: Burrup Peninsula Aboriginal rock art could be given World Heritage status

More coverage of the proposed World Heritage listing for Burrup - this time on The Age. 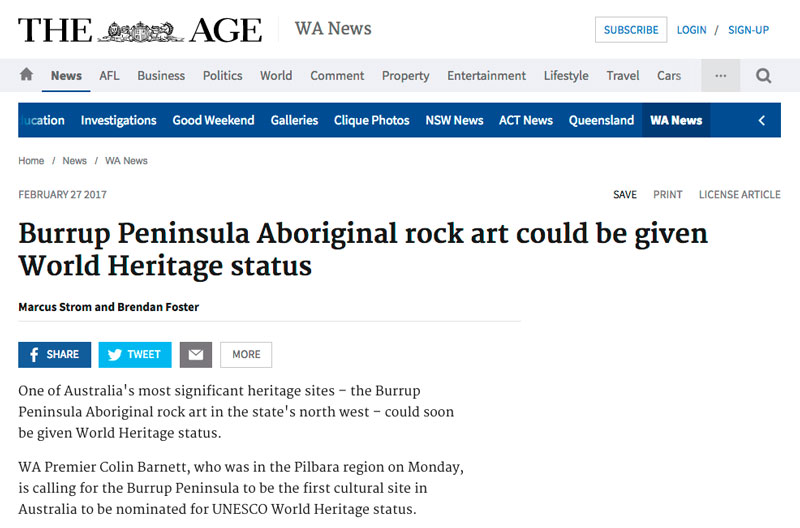 "A trail of correspondence and public statements from Labor and Liberal politicians expressed commitments to list the area on UNESCO's World Heritage list.

Mr Barnett has repeatedly referred to the rock art as having "world significance". In 2006 he said it was "absolutely inevitable" that the Burrup rock art would get World Heritage listing.

In August last year he tweeted a video saying the site would become World Heritage listed at some stage." 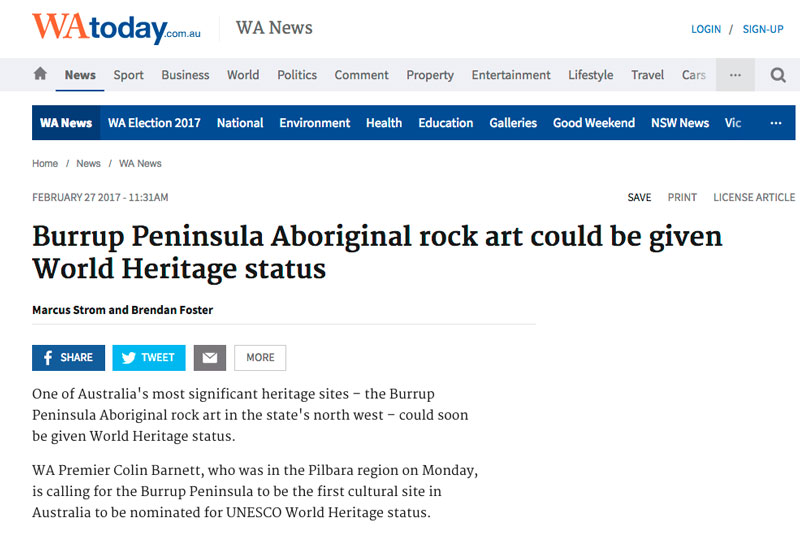 One of Australia's most significant heritage sites – the Burrup Peninsula Aboriginal rock art in the state's north west – could soon be given World Heritage status.

WA Premier Colin Barnett, who was in the Pilbara region on Monday, is calling for the Burrup Peninsula to be the first cultural site in Australia to be nominated for UNESCO World Heritage status.

"It is important this unique rock art is recognised nationally and internationally for its incredible cultural record of Aboriginal life at this location many thousands of years ago," Mr Barnett said.

"A World Heritage listing would complement the local Murujuga Aboriginal Corporation's plans for cultural tourism opportunities and infrastructure, including the creation of a Living Knowledge Centre to conserve, protect and interpret cultural values and sites on the peninsula."

The Western Australian government has produced a media release announcing a plan to nominate the Burrup rock art site for the World Heritage list.

"The world’s largest concentration of rock carvings in the Western Australian Pilbara’s Burrup Peninsula will be nominated for prestigious World Heritage listing boosting the region’s tourism potential, under a re-elected Liberal Government.

Premier Colin Barnett said the plan would see the Burrup rock art sit alongside pristine Shark Bay and the abundant marine life of the Ningaloo Coast to become the third World Heritage-listed place of special cultural or physical significance on the WA coast.

“It is important this unique rock art is recognised nationally and internationally for its incredible cultural record of Aboriginal life at this location many thousands of years ago,” Mr Barnett said."

The magnificent Aboriginal petroglyphs of the Burrup Peninsula are the oldest and largest gallery of Aboriginal rock art anywhere in the world and should be World Heritage Listed.

These engravings are more than 40,000 years old and demonstrate continuous human habitation from before the last ice age until the massacres which occurred in 1868.

The foundation welcomes Liberal Leader Colin Barnett’s promise to propose the area for world Heritage Listing if he is returned to Government.

“Colin Barnett has spoken long and often about World Heritage listing of the area but failed to act when he had the power to do so. Instead he has encouraged industrial development including YARA International’s Technical Ammonium Nitrate plant which will destroy the petroglyphs with acid rain and acid dust particles if is given an operating license.”

“I call on Colin Barnett to get serious about protecting the area. Start with World Heritage Listing and at the same time, relocate YARA’s TAN plant to the Maitland Industrial estate.”

PS. Mark McGowan has said nothing. 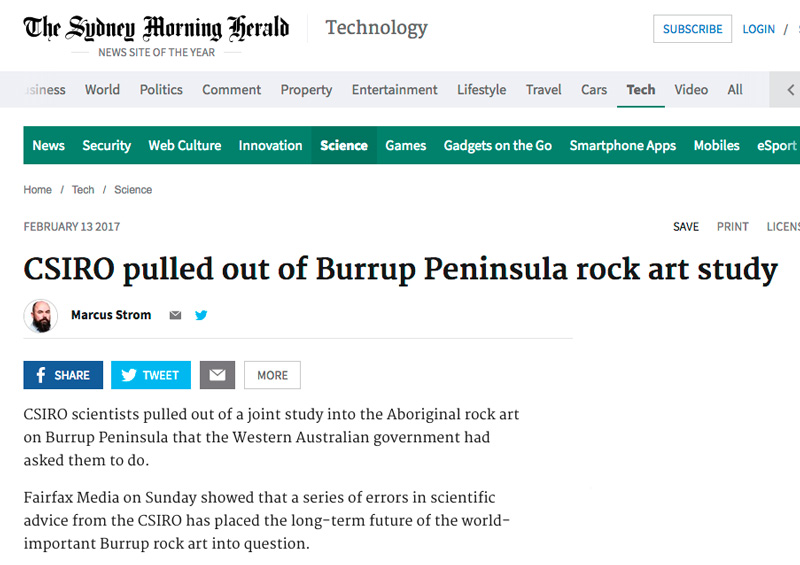 "CSIRO scientists pulled out of a joint study into the Aboriginal rock art on Burrup Peninsula that the Western Australian government had asked them to do.

Fairfax Media on Sunday showed that a series of errors in scientific advice from the CSIRO has placed the long-term future of the world-important Burrup rock art into question." 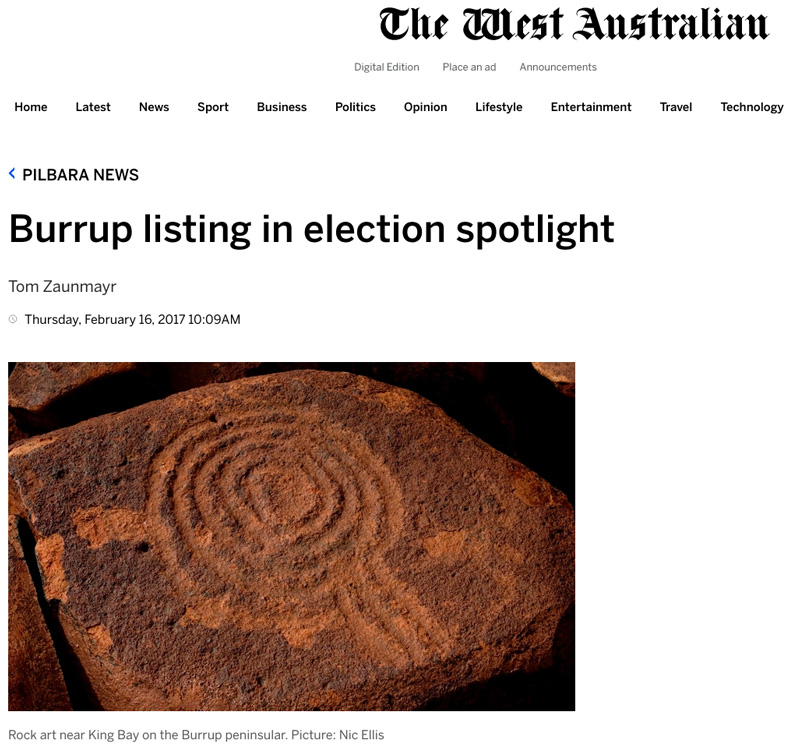 "The coexistence of industry, history, culture and nature on the Burrup is set to become an election flashpoint yet again as calls strengthen to protect the sacred rock art on the peninsula.

A campaign has been running for more than a decade to list the peninsula because of the presence of tens of thousands of indigenous rock carvings, some of which are believed to be more than 50,000 years old. 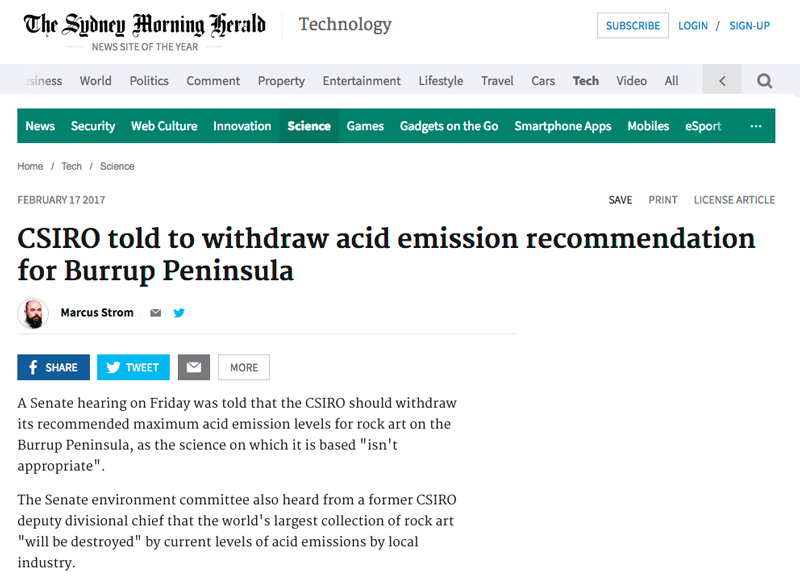 "A Senate hearing on Friday was told that the CSIRO should withdraw its recommended maximum acid emission levels for rock art on the Burrup Peninsula, as the science on which it is based "isn't appropriate".

The Senate environment committee also heard from a former CSIRO deputy divisional chief that the world's largest collection of rock art "will be destroyed" by current levels of acid emissions by local industry." 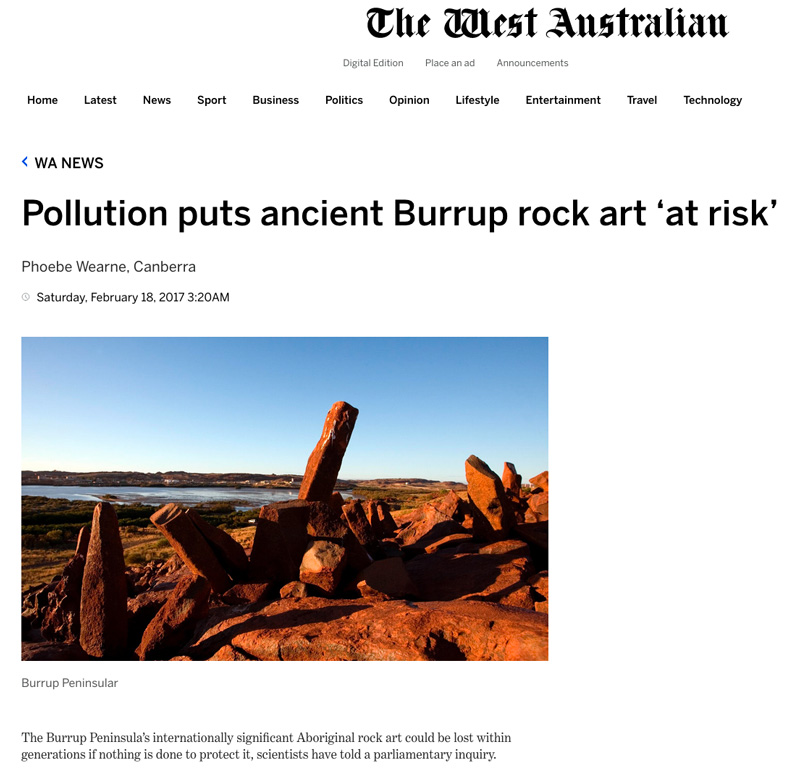 "The Burrup Peninsula’s internationally significant Aboriginal rock art could be lost within generations if nothing is done to protect it, scientists have told a parliamentary inquiry.

More than a million petroglyphs depicting the Ngurra Nyujunggamu — the soft time of creation — sit uncomfortably close to industry on the peninsula, which the local Aboriginal people call Murujuga.

Some of the art dates back more than 30,000 years and the Pilbara site is registered on the National Heritage list."