Indigenous leaders from Malaysian Borneo are urging Adelaide University to pay back AUD $ 400,000 in donations received between 1987 and 2006 from Taib Mahmud (“Taib”), a former Chief Minister of the Malaysian state of Sarawak.

In a letter to Vice-Chancellor Warren Bebbington, eleven Penan headmen demand that the Taib donations be returned to Sarawak as they had been illegally acquired by the Malaysian politician who studied law in Adelaide in the late 1950s. The letter is signed by the community leaders with their thumbprints.

The Penan were Borneo’s last nomadic hunter-gatherers until most of their rainforests were destroyed by the Taib government since the mid-1980s.

“When Taib studied law in Adelaide as a young man, he was as poor as we are today”, states the letter signed first by former Penan penghulu (paramount chief) James Lalo Keso. “Later on, he decided to become a politician […]. But instead of helping us indigenous people, Taib became greedy and only interested in enriching himself and his family members.”

“Our lives were good and self-sustaining until Taib Mahmud gave our land away to the logging and plantation companies without our consent. (…) It is an open secret that the loggers gave a lot of bribes to Taib Mahmud and his family members.”

The Penan demand from Vice-Chancellor Bebbington “to take a courageous decision” and restitute the Taib funds in order to correct injustice done by the former Sarawak Chief Minister: “We need this money urgently to develop the Penan Peace Park and send our children to school and higher education. For you, $400,000 is not much, but for the Penan this is a lot of money which can help change our young generation’s lives.”

The Penan have been struggling to protect their rainforests against logging for close to thirty years. The “Penan Peace Park” is their latest plan for a community-administered forest reserve.

Taib Mahmud’s donations to Adelaide University had been disclosed in November under a Freedom of Information request by South Australian Greens MP Mark Parnell. Research by the Bruno Manser Fund has shown that the Taib family also secretly purchased the AUD$55 million Adelaide Hilton hotel. 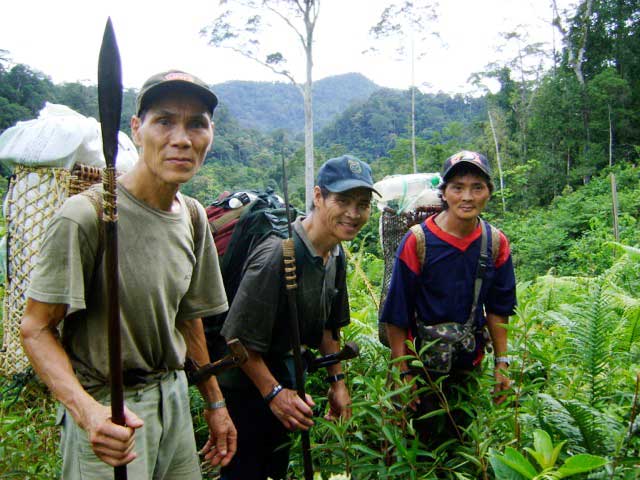 Penan leaders from Sarawak, Malaysian Borneo, are claiming back AUD$400,000 in donations from Adelaide University. Former Penghulu (paramount chief) James Lalo Keso (centre) is one of the signatories of the letter to Adelaide University's Vice-Chancellor Warren Bebbington.