Book Review - "The Rise and Fall of Gunns Ltd. " by Quentin Beresford 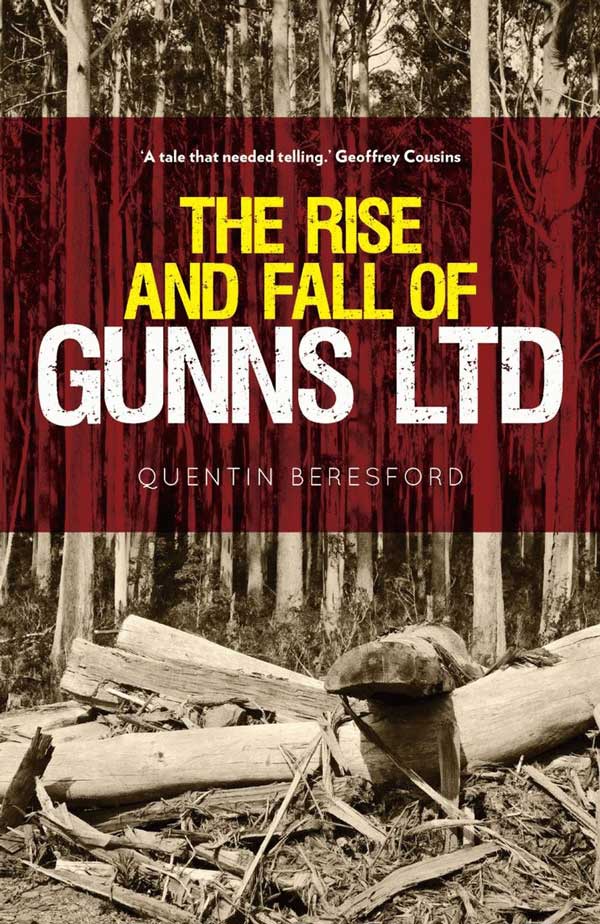 Quentin Beresford's 'Rise and Fall' should be kept on the kitchen sideboard. Here, in 400 pages, is the best reply to the next visitor who asks why Tasmania's fortunes have been so blighted.

The book is a history of big egos and arrogance overrunning respect for democracy and public wellbeing in Tasmania. In 1972, for example, Premier 'Electric' Eric Reece arrogantly flooded Lake Pedder ("there was a national park out there but I can't remember exactly where it was") but the book focuses on Gunns supremo John Gay's bid for a huge pulp mill in the Tamar Valley in 2003-10.

When Gay was asked on national television about his logging regime poisoning protected wildlife he famously replied "Well, there's too many of them...". The program was a PR disaster for Gay and for Tasmania but the 'combative, authoritarian and arrogant' entrepreneur was determined to build his mill regardless of public opinion.

He wasn't alone. Tasmanian Labor premiers Jim Bacon and Paul Lennon were urging Gay to get the pulp mill going before it was either assessed or discussed in public. Bacon 'had a penchant for cutting deals behind closed doors'. Lennon 'not only staked his political career on this one project, he saw it as his legacy'.

Yet, explains Beresford, the project would have failed even if the public had not turned out in its thousands in Hobart, Launceston and down the Tamar to express disgust with both the polluting project and the highhandedness of its proponents. Gay was unable to get finance from any of the banks which flew into Launceston to talk over his mill prospectus.

Beresford cites 'crony capitalism' as 'determined less by the free market than by the favouritism extended by the government'.

At the dark heart of the Gunns pulp mill fiasco is Premier Lennon's torpedoing of the Resource Planning and Development Commission's independent assessment of the project. With Liberal backing, Lennon fast-tracked a bill through parliament to get the pulp mill going.

Earlier Lennon had 'issued an ultimatum' to RPDC chair Justice Christopher Wright telling him his public hearings were to be abandoned. This matter, said to have left the former judge 'in shock', is central to ongoing calls for a Royal Commission.

Beresford nails the CEO psychology which flirts with corruption to get its way. 'Dominant, narcissistic ... an extremely low capacity for introspection, a strong propensity for Machiavellian conduct and a sense of being above the law.'

'Gunns was a train wreck waiting to happen. John Gay was in the driver's seat' and, along with his unfinanced mill project, he and the company came tumbling down.

Beresford concludes with a call to make a failed experiment work. 'Jim Bacon actually had part of the solution. The consultative process (with the public) surrounding Tasmania Together unleashed positive energy and ideas that, had they not been undermined by Bacon's Machiavellian instincts, might have provided a blueprint for the state to build on its recent record of innovative new industries around a model of environmental sustainability.

'In this upbeat time of booming tourism, based on Tasmania's wild and scenic beauty and cultural attractions, a more intelligent and diverse economic model which respects the community at large seems as inevitable as it is advisable. But don't bet on it.

Beresford's courageous, well-researched and timely book does not proclaim the end of crony capitalism. It is too early to pronounce that dinosaur (or its cronies) dead. The price of open, honest government and true economic advancement will remain vigorous public vigilance.